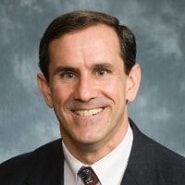 “Strategy went out the window, frankly.”

In healthcare IT, where anything from a hurricane to an expected outage can disrupt operations, disaster preparedness is critical. Leaders want to know what to expect, and how they can best react. It’s precisely why Virginia Hospital Center works with groups like FEMA to run drills — so that everyone from network engineers to nurses know what to do in the event of, say, a terrorist attack.

What VHC — along with every other organization in the country — has learned, however, is that when a global pandemic hits, strategy goes out the window. “Nothing can prepare you for something of this magnitude and duration,” said Mike Mistretta, who has served as CIO since 2015. Luckily, his team did have the ability and willingness to pivot quickly, and immediately took steps to be able to accommodate the surge in patients while protecting caregivers.

In a recent interview, Mistretta talked about how VHC pieced together a Covid-19 response (including setting up the area’s first drive-through testing center), what he believes will be the biggest challenge as facilities reopen, and what he would’ve done differently, given the opportunity.

We really were doing builds overnight. The responsiveness and the productivity that the staff has been able to maintain while working remotely has been pretty incredible in my mind.

If you have good relationships with your vendors and you have true partners, they’re more than willing to come out and say, ‘How can I help?’

There’s no crystal ball, unfortunately. If we’ve done solid planning, that’s what’s going to carry us forward in the future in areas like telemedicine that were extremely accelerated during this period.

We don’t have to worry about whether it’s the right person accessing our systems. We know pretty definitively that it is. Again, some of the prior initiatives we put in place have paid dividends.

Gamble:  As you’re going through all of this, I imagine it’s helping to create a roadmap, whether it’s for a second surge or something similar, based on knowledge gained from Covid-19.

Mistretta:  Surge planning is something we’ve gotten pretty good at. The flexing of different nursing units, things like that. My teams had to go out and change rooms from single occupancy to semi-private rooms to get capacity. We’ve converted labor and delivery rooms to negative air pressure Covid-19 rooms — different things like that where facilities does something and then our team jumps in.

We really were doing builds overnight. The responsiveness and the productivity that the staff has been able to maintain while working remotely has been pretty incredible in my mind. Literally, we would get on a 4 o’clock COVID call, and people would ask, ‘Can we get this data and this report so we know what’s going on here?’ And the next morning, we’d have it for the 9 o’clock call. The responsiveness that we’ve had and the people’s willingness to do whatever it takes is pretty phenomenal.

Gamble:  Let’s talk about the drive-through testing site. It was the first one in your area — did you get any calls asking for advice on how to set up something like that?

Mistretta:  It’s funny, but it was actually a self-preservation move on our part. The emergency room was starting to pick up with Covid patients, and we didn’t have a good facility or space to do testing without contaminating other patients. So we asked, how can we do this a little differently? What can we do?

As I mentioned, we work with our EMS and emergency preparedness people in the county quite frequently, so we talked to them about setting something up and they said, ‘We have a site.’ So we used their site. They have fiber there so we did VPN tunneling to get connectivity to our applications. We put a couple access points out there, brought all of our technologies with us, and worked with them on traffic flow with the police, fire department and sheriff’s department. It all came together within literally a week. We got a design on the build and figured out how we wanted to do it and how we could do orders — that was on a Thursday night. The team came into the office on Friday; we sat down and did a design session, and we opened on Tuesday. It is pretty phenomenal how quickly it came together, and it was extremely successful. We did well over a thousand tests.

Gamble:  That’s something we’ve been hearing a lot; that out of necessity comes innovation, or at least the ability the use resources more effectively.

Mistretta:  What’s been amazing is that everyone has taken ownership of their piece. It’s been, ‘how can I help? Where do you need me?’ As a matter of fact, right before this call I was helping our biomed folks get one of our empty units ready to admit patients. We’re literally going out and hanging pulse oximeters on the wall.

Gamble:  There’s that upside of seeing how organizations have been able to pull resources together and accomplish so much in a short amount of time, and I think we’re going to look back in amazement.

Mistretta:  Agreed. The other thing I want to mention is the vendor relationship. If you have good relationships with your vendors and you have true partners, they’re more than willing to come out and say, ‘How can I help?’

One example is our nursing team. They were pretty distraught because Covid-19 patients are in isolation rooms, and when they start to demise, there’s no family around. And so we reached out to few of our partners and said, ‘Is there any way I can get a half a dozen or a dozen WebEx accounts and a bunch of iPads?’ I had them literally in two days. They were set up and distributed so that when patients have to make end-of-life decisions, they can do at least a video call with their families. They can at least have a short conversation or see them. We’ve had vendors stepping up and donating those types of services and equipment. And so I’d say the vendor community has been pretty phenomenal. If you have good relationships with your folks and you’ve treated them right over the years, they recognize that and they help you.

Mistretta:  Sure, but in all honesty, the flipside to that is those who don’t — we’ll remember that too.

Gamble:  When you look at what Virginia Hospital Center has done, and how things were managed and prioritized, is there anything that you would have done differently or would do in the future if there’s a second surge?

Mistretta:  Would I do anything differently? That’s a good question. I’d like to be more out in front of things if we could. But there’s no crystal ball, unfortunately. If we’ve done solid planning, that’s what’s going to carry us forward in the future in areas like telemedicine that were extremely accelerated during this period. We went from doing a pilot program with just a couple hundred visits to literally thousands of teleconsults. I think we’re going to be better prepared for those types of things.

If there is a second spike, we’re going to be better off, because we have experience now, and we continue to harden that infrastructure. In terms of security, we had already rolled out dual factor authentication for remote access and all the different things we needed to do there. I think if we’ve done the right things and we can anticipate what works and harden those things, we’ll be fine if the second wave comes.

Gamble:  Right. It’s really important to be able to do authentication, especially when you have people stepping into different roles.

Mistretta:  One of our first priorities with so many people now working remotely was checking our bandwidth with our internet providers. ‘What’s our capacity? How many concurrent users can we have? We run a virtual desktop infrastructure — how many sessions simultaneously can we have?’ And then across the board getting dual-factor authentication out there. We just did that in the last six months, and so we were ahead of the curve on that. We don’t have to worry about whether it’s the right person accessing our systems. We know pretty definitively that it is. Again, some of the prior initiatives we put in place have paid dividends.

Gamble:  Right. Realistically, there are going to be some things you would’ve liked to have done better, but all things considered, it seems like the organization was in a good spot.

Mistretta:  I think so. We were a little bit ahead of the curve on the technical side; probably more so than clinical side. But they were pretty well-prepared. They had sufficient PPE; we haven’t run into any issues with anything of that nature. Staffing-wise, they’ve held their own. Where we probably weren’t as prepared was the cross training of staff. But there’s no way to know these things.

Gamble:  I think that this is going to be an enormous game changer when it comes to disaster preparation strategies.

Mistretta:  I think so too. Our disaster preparations prior to this were more along the lines of a terrorist attack, where you see a spike that one or two days duration, and you treat those patients and it kind of runs its course. This was a whole different magnitude.

Gamble:  Absolutely. Well, I want to thank you for taking the time to speak with us, especially since I know you’ve had some people out sick.

Mistretta:  We’ve actually done fairly well with that. We have had very few cross-contaminations; our PPE infection control people have done a great job. Some of the stories I’ve heard from my peers are almost nightmares. When you look at some of the post-acute areas around here, they’re really hurting. We really haven’t had too many problems with it. We’ve had a few, but not anything remarkable.