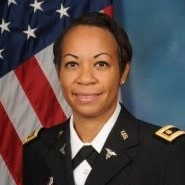 When you’re a military-based health IT leader, one of the biggest challenges is to identify initiatives that align with the overall organizational strategy — and can be completed within a specific timeframe. Not an easy feat, but any means. For Lt. Col. Chani Cordero, who spent three years as CIO with the US Army’s Information Management Division and Medical Education Training Campus, that project involved a concept that hasn’t yet made its mark in healthcare: gamification.

That could soon change, says Cordero, who believes gaming has enormous potential as both a learning tool for medical students and a motivating factor in patient engagement. In this interview, she talks about how she incorporated gamification into her strategy and how it can be so beneficial. Cordero also discusses the military’s ultimate goal of standardizing IT systems, why it’s critical to bring naysayers into discussions, and what she has learned in her time with the Army. [**Please note that the opinions expressed by Lt. Col opinions are her own, and are not endorsed by the Defense Health Agency or the U.S. Army.]

I don’t actually choose the vendors. The contracting agency does that for us based on the request for proposal and the package they receive back. I think that helps a lot, because it takes away the perception of being influenced.

It had nothing to do with IT, but it was part of the healthcare spectrum. That gave me a different perspective; and now that I’ve done a job like that, it helps me understand how to provide support a lot more efficiently.

The military has provided me with opportunities that some people don’t every get to experience — just being able to work with the greatest nation on earth, and ensure that the healthcare needs of our service members are taken care of. There’s no bigger honor than that.

I believe that if you want to join a professional organization, you really should be a part of the community. What’s the purpose of joining if you’re not going to serve and be a part of it?

Gamble:  When you’re under certain constraints — and hospital leaders can relate to this — the onus is on you to make sure you’re getting the most out of vendor agreements and make sure it’s a partnership that benefits you as much as them.

Cordero:  Absolutely. We’re very fortunate in the public sector in that we have a contracting agency that provides a lot of those guidelines for us. Though I have some influence in how the statement of work is created, I don’t actually choose the vendors. The contracting agency does that for us based on the request for proposal and the package they receive back. I think that helps a lot, because it takes away the perception of being influenced; our contracting officers don’t know the vendor specifically. My task is to ensure that the statement at work details the requirement, and that it’s not, ‘I really like company XYZ because they took me to a steak dinner,’ which is already wrong to begin with, but to say, ‘we went to dinner, so I’m going to throw business their way to justify it’ is not the way we do things. I think the way the public sector does it really does keep that separate.

Gamble:  That’s very important. I’m sure you see a lot of it when you go to conferences and events, in terms of the wooing that goes on.

Cordero:  Right. I’ll take a pen because it’s under $5, but that’s where it stops.

Gamble:  And now, you said you’ve been in your current role for three years?

Cordero:  Three years this month. In my next assignment I’m going back to a hospital, so I’m extremely excited. I’ve been away from the hospitals for the last couple of years, and so ready to go back to the business of healthcare.

Gamble:  It seems like you were able to get a variety of different roles in healthcare. Do you think that’s given you a good foundation?

Cordero:  Absolutely. And I’ll specifically talk about the Army, because the Air Force and Navy grow their CIO slightly different. But first and foremost, the Army teaches us how to be leaders. That’s absolutely the best aspect — learning how to be a leader; learning how to influence, motivate, and bring an organization to change.

The second part of it is the experiences you get in being a leader; being thrust into different organizations. You start off small and then you go to a medium size and to a larger size. That’s pretty much how our career development goes. But then there are times that we might step out of the role and do something different. For example, I did a stint in managed care, where I learned how to run our TRICARE office. That had nothing to do with IT, but it was part of the healthcare spectrum. That gave me a different perspective; and now that I’ve done a job like that, it helps me understand how to provide support a lot more efficiently.

Gamble:  Given the direction healthcare is going with value-based care, it seems like that will be a valuable experience to be able to draw from.

Cordero:  Absolutely. I jokingly say that we’re always hiring. The military is always hiring. I’ve had a very successful career for me and my family. The military has provided me with opportunities that some people don’t every get to experience — just being able to work with the greatest nation on earth, and ensure that the healthcare needs of our service members are taken care of. There’s no bigger honor than that.

Gamble:  Let’s talk about your next role.

Gamble:  What’s the size and scope of that organization?

Cordero:  Fort Hood is an extremely large Army base. If it’s not the largest, it is probably the second largest facility the Army has. There are thousands of soldiers, as well as sailors and airmen that are stationed there. Darnall is unique because it’s one of the few facilities in that area, and so they essentially support about 42,000 active-duty personnel and over 140,000 family members. They deliver lots of babies there, and that’s always exciting. If you ever have a bad day and you can go see babies, it always makes the day better.

The majority of what we do in the military is outpatient care, and depending on the complications of the patient, we may outsource it. And so we work with a lot of our local partners and hospitals in the area to help take care of our service members.

Gamble:  Okay. Now, in terms of your career, have you been in Texas for the most part, with the exception of Tricare?

Cordero:  Actually, I’ve been in Texas for the last couple of years, because I received a fellowship to the Army-Baylor graduate school program. I’ve been in grad school for two years, with one year doing the actual didactic training, and the second year doing a fellowship at a civilian hospital in San Antonio. I started my career in Texas at Fort Hood, and from there I went to Augusta, Ga., then to the Aberdeen Providing Ground in Maryland. After that I lived in Korea for three years, then we came back to Texas. We’ve been around a lot.

Gamble:  That seems typical of military career. Do you have other family in Texas or a network there?

Cordero:  Yes. I actually come from a very heavy military family. Both of my parents served, and five of my eight aunts and uncles have served. My mom still serves. She’s a retired Air Force, and so our family holidays can be quite fun. She’s now a federal employee for the Air Force. My dad works for the VA, and so he’s also continuing to serve.

Gamble:  The last thing I wanted to talk about is the work you’ve done with organizations like CHIME, where you’ve participated in the Women’s Leadership Committee and the Diversity Committee. How does this benefit you?

Cordero:  I’m very active in CHIME, and I like to serve on committees. I believe that if you want to join a professional organization, you really should be a part of the community. What’s the purpose of joining if you’re not going to serve and be a part of it? With CHIME and some of the committees that I’ve served on, I get a personal fulfillment in being able to serve the community. For me, work has to have meaning; I have to do it because I fundamentally believe it’s for the greater good. And so I enjoy serving on committees for that alone.

On the professional side, I also learn about new aspects of healthcare or healthcare delivery that I’ve never thought about. In the military we’re pretty much focused on outpatient/inpatient. We have some specialties within our facilities, but through my involvement with CHIME, I’ve met CIOs in different verticals that I may not have considered, like those that do rehab services or acute facilities. I’ve always been a part of a hospital system, and so that has exposed me to what I want to do when I grow up.

Gamble:  Right. Well, I can certainly talk to you longer, but in the interest of time, we should wrap things up. It’s been really interesting to learn about your career, and I think our readers and listeners will appreciate this perspective. So thank you so much for your time.

Cordero:  Thank you, Kate, for inviting me to do the interview. I look forward to any dialogue that comes from this, and I hope we can continue to partner.

Gamble:  That sounds great. Thanks again, and I hope to speak with you again down the road.