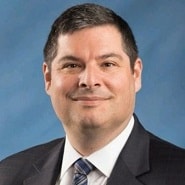 When asked why they chose to pursue a new role, leaders often say they needed a challenge. Although sometimes it can be code for another reason, it certainly seems fitting in Jonathan Goldberg’s case. A year and a half ago, he left St. Peter’s Health Partners in upstate New York to serve as CIO at Arkansas Children’s Hospital, the only facility of its kind in a state that ranks 49th overall in children’s health. While that might have some people running for the hills, Goldberg views it as a “huge opportunity to make a difference.” In this interview, he talks about the learning curve in transitioning to pediatric care, the challenge in juggling multiple big projects at the same time, the innovative work his team is doing with telemedicine, and how they’re leveraging technology to stay lean.

I like to call myself an accidental CIO. I did not start my career in technology — I didn’t even know what a CIO was when I started my career.

It’s really exciting to be able to see that change. And so much of it is technology-oriented, so to be part of implementing a lot of the technologies and developing that strategy that can have such a lasting impact is amazing.

In terms of how we think about what’s needed in terms of medications and the types of medication, the dosing, the staffing needed, the different types of tool sets that need to be available, and the skills, it certainly has been a learning curve.

I’ve never regretted anything I’ve done in my career. I’ve been very blessed to have had such a great career at great places with great people. I look back with fondness on every role that I’ve ever had, but each one really was a springboard to the next opportunity, and I don’t think I would change much if I could turn back the clock.

Gamble:  You’ve been with the organization for about a year? When did you first get there?

Gamble:  Okay, and before that you had been with St. Peter’s in New York?

Goldberg:  Yes, almost 13 years with St. Peter’s Health Partners in Upstate New York. My whole career has been in the northeast — this is my first foray into the south.

Gamble:  I imagine that was an adjustment. What made you interested in going to Arkansas Children’s?

Goldberg:  It’s a great question, and it’s a pretty easy one to answer. I like to call myself an accidental CIO. I did not start my career in technology — I didn’t even know what a CIO was when I started my career. I started in nursing home administration. That was something that interest me for a couple of reasons. My whole family has always been in health care, whether it was doctors, dentists or in healthcare equipment sales. So I’ve always been in the healthcare environment through my family.

Also, I wanted to run something. I see myself as a little bit of having an entrepreneurial spirit. Nursing homes, to me, was a way of giving back while still having a significant career, and so it enabled me to climb that career ladder, but at the same be a boss, which was something I wanted to attain at some point. At the same time, nursing homes have a patient population that needs others to help them, and so it was meaningful work.

I’ve had some colleagues over time who came from children’s hospitals, and I had some introduction to children’s hospitals in the years I’ve been doing this. It seemed like a place that would be a lot of fun, and very meaningful from a career standpoint. One of my goals was to get to a children’s hospital, and when this opportunity came up, it certainly was not something that I wanted to let pass by. I’m glad I made the change.


Gamble:  What do you think are the most challenging and the most rewarding aspects of being in pediatric care from the perspective of an IT leader?

Goldberg:  It’s interesting — every children’s hospital may be different, and certainly environments dictate certain things. But when you look at the state of Arkansas, we see a huge opportunity to make a difference. In terms of women and children’s health, we’re ranked 49th out of 50 in outcomes, so there’s really only room to grow and to get better, and we really are taking that mission seriously.

With the new hospital, as well as the statewide clinically integrated network and the things we’re doing around telemedicine, we’re really putting our money where our mouth is in terms of trying to get out to the entire state as it relates to pediatric care, and getting in on the ground floor at least in terms of our strategic growth that we’re going through right now.

It’s really exciting to be able to see that change. And so much of it is technology-oriented, so to be part of implementing a lot of the technologies and developing that strategy that can have such a lasting impact is amazing. Maybe in a couple of years we’ll be ranked in the 30’s or 20s, who knows. But I think that certainly is a huge piece of the satisfaction factor.

And then of course it’s what you see happen here every day. Miracles happen in all hospitals throughout the United States, whether it’s adults or kids. Amazing things happen everywhere. It is really pretty amazing to see some of the things that we’re doing and the impact we’re making on kids’ lives. You can’t ask for anything better.

Gamble:  You mentioned telemedicine, and I saw that ACH has a school-based program. Is one of the goals there to get better care access for kids in those areas?

Goldberg:  Yes. There are over 25,000 kids throughout the state in rural areas that don’t even have access to transportation. Their families don’t own cars. So we targeted schools that have a population of less than 5,000 people in a geographic region. These are areas where we want to have school nurses leverage our capabilities to keep kids in school, keep parents at work, and let parents do follow-up care with their family practitioners, whether it be after hours or on the weekend, or the next free time they have. At the least, let’s get care started immediately without interrupting everybody’s lives. That’s a huge start to being more proactive with how to help communities and, like you said, make sure kids are getting the care they need.

Gamble:  Right. Now, in terms of coming from the northeast where you had been for so long, to Arkansas, I can imagine in it of itself was an adjustment. How did you make that adjustment?

Goldberg:  You know, it wasn’t as a big a shock as one would think. There is always that impression — it may be because of the rural nature of Arkansas and some of the reputation that it may have, but Little Rock is a great city. It has lots of amenities. It almost was no different than living in Upstate New York, in Albany. They’re very similar sized cities — both state capitals, both on a river, similar sized populations, and very rural once you leave both of the cities.

The people here have been super friendly. That southern hospitality is showing through, and so we’ve really enjoyed the time we’ve had here so far. It really wasn’t as big adjustment as one would think. Certainly, there are some differences to how the state is run. Some of the laws and uniqueness to the state you look at say, ‘how did they come up with that decision?’ but assimilating was easy.

I think you find nowadays that it’s harder and harder to find a lot of uniqueness from city to city, because things are becoming so nationally chain-based — even internationally. I remember I was in Italy a year and a half ago, and everywhere you turned, there was an American company, whether it be restaurants or real estate. No matter where you go now, you feel like you’re in the same place. If you look hard enough, you’ll see lots of uniqueness and lots of local activities to take on, and that’s what we’ve been trying to do. But there’s always a little bit of comfort in seeing things you’re already familiar with.

Gamble:  Right. As far as going to a children’s hospital, I can imagine there’s a learning curve because of the huge difference you’re dealing with in terms of having the smallest patients to ones who are young adults. I’m sure that takes a little while to get used to.

Goldberg:  There’s certainly a different language that gets used and different focus points that are important when you’re talking about the smaller populations. A significant amount of our work is in intensive care; they are really the smallest of the small. So in terms of how we think about what’s needed in terms of medications and the types of medication, the dosing, the staffing needed, the different types of tool sets that need to be available, and the skills, it certainly has been a learning curve. I’m constantly learning, and I continue to try to be very visible. I spend a lot of time trying to get with other folks and learn and absorb and observe. It’s been a lot of fun. I think my knowledge is probably about 5 percent of what it needs to be, but hopefully I’ll be able to continue to learn from those who are doing.


Gamble:  It certainly seems like it was the right move for you, and I’m sure there’s never a dull moment, especially with so many things going on with the organization.

Goldberg:  No, there’s not. It’s been a great move. I’ve never regretted anything I’ve done in my career. I’ve been very blessed to have had such a great career at great places with great people. I look back with fondness on every role that I’ve ever had — not that I’ve had that many — but each one really was a springboard to the next opportunity, and I don’t think I would change much if I could turn back the clock.

Gamble:  Right. Well, I think wraps things up pretty nicely. Thank you so much for your time, we appreciate the chance to hear about the cool things going on at Arkansas Children’s.

Goldberg:  Anytime. It’s always fun to talk about it. And of course, you can follow both me and Arkansas Children’s Information Services on Twitter. That’s something we’ve been doing over the last 6 months or so to try to increase engagement and keep communications open. We have a lot of fun with it; it’s a way to use some of the technology tools we have out there to play a little.

Gamble:  Very cool, I’ll check that out. Thanks so much, and I’m sure I’ll be in touch again.

Goldberg:  Thanks, Kate. Have a good day.