Although there are plenty of vendors exploring the international space, the market for electronic patient records outside of the United States is still in the early stages, according to a new KLAS report — International EPR Market 2012: Multinational Vendor Footprints.

The report, which is the first by KLAS to examine the global EMR market, revealed that most buying activity is centered in Asia, the Middle East, and the UK. However, it found that adoption is still shallow, with relatively few sites demonstrating deep clinical adoption. Allscripts, Cambio, Cerner, Epic, Meditech, and Siemens are the only commercial vendors with HIMSS Stage 6 or 7 hospitals outside of the United States.

“It’s still an upcoming market. This project has been almost two years in development, and we keep being surprised by what we find,” said report author Doug Tolley, noting that there are about 3,000 hospitals outside of the United States with an electronic patient record from a commercial vendor. “Without the kind of government incentives that exist in the U.S., it’s been a slower build for most countries.”

The study focused on vendors with an EPR solution live in more than two countries, including Agfa, Alert, Allscripts, Cambio, Cerner, CSC/iSOFT, Epic, GE, IMS, InterSystems, McKesson, Meditech, and Siemens. Vendors were divided into three groups based on the number of countries and EPR sites contracted, with the top tier consisting of Siemens, InterSystems, Cerner, Meditech, and CSC/iSOFT. The second level of vendors included Alert, Agfa, Allscripts, and McKesson, while GE, Cambio, Epic, and IMS demonstrated the smallest breadth.

Cerner, Meditech, and Siemens were the only vendors with solutions in every region of the world, the report found. 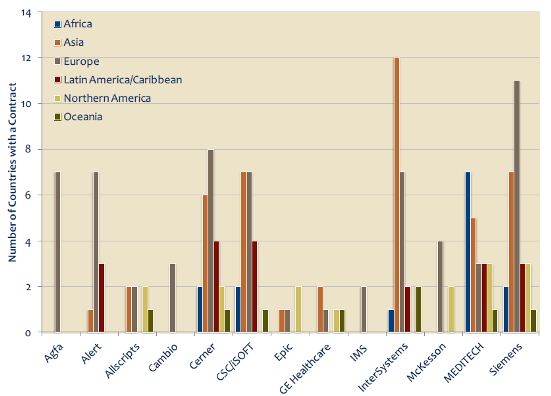