Application hosting continues to garner attention from a growing number of healthcare providers, particularly in the community hospital space, as they see it as a way to offload capital expenditures and tap into the higher level of technology a hosting provider can offer, according to KLAS.

The report also notes that more hosting providers are taking on multiple vendors. Cerner and Siemens are hosting key third-party applications in addition to their own suites, with Cerner hosting Oracle (which was the major gap for Cerner sites two years ago) and Siemens hosting NextGen.

According to KLAS, ACS’ and Dell’s improved performance scores position them to offer more competitive reliability and support to healthcare providers wanting one vendor to host all of their applications.

Most new EMR sales are to community hospitals, and a growing number of these customers are opting for application hosting, KLAS found. Cerner and Dell are seeing particular success, the company stated, as Cerner offers a packaged, hosted solution called CommunityWorks and Dell’s fastest-growing business is with smaller Meditech hospitals on C/S v.6. More clients of McKesson’s go-forward platform, Paragon, are also opting to have the product hosted. 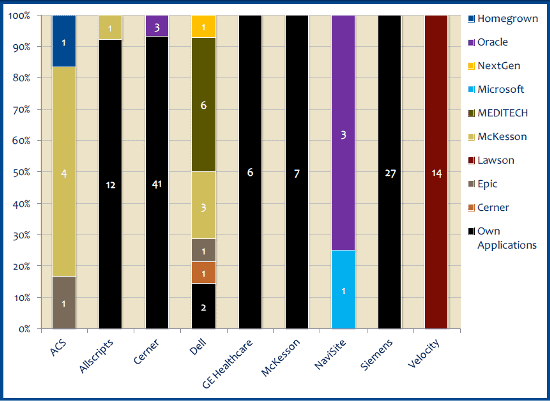 Click on the chart to see a full-size version