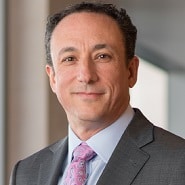 “Innovation in hospitals isn’t new.” It may seem like an obvious statement, but as most health IT leaders can attest, it’s not. In fact, it’s a common misconception. The reality, says Darren Dworkin, CIO at Cedars-Sinai, is that innovation has always been a core philosophy at academic medical centers. What’s novel is the focus around delivery of care, and the pivotal role digital technology can play facilitating communication and enabling patients to become more engaged.

At Cedars-Sinai, innovation has always been part of the culture, whether it’s by being an early adopter of Epic’s Care Everywhere, working with Apple as a foundation member, or creating a “living lab” for startups through its Accelerator program. For Dworkin, this philosophy is the only way to move forward in the ever-changing health IT landscape. Recently, we spoke with him about the evolution in consumer engagement (and what it means for CIOs), how the recent Cambridge Analytica saga “opened peoples’ eyes,” the most significant way in which the CIO role has changed since he started 12 years ago, and what gets him most excited about the future.

Being able to support the community and have some small part in growing the health IT ecosystem here in Los Angeles is rewarding, above and beyond some of the more immediate benefits we’re seeing from the companies we interact with.

The bigger we can grow the network and the ecosystem, the more we’re helping the industry as a whole. At the end of the day, it doesn’t really matter to us where a great company gets created, as long as great companies are being created to solve real problems in healthcare.

For a long time, I think healthcare organizations were so focused on the complexities and difficulties of implementing what the rest of the industry would refer to as enterprise software that we really got stuck for a while thinking that was the entire problem.

Healthcare is different. The stakes are different. Not every patient is a consumer, and not every consumer is a patient. There a lot of intricate and nuanced details that we need to manage; but with all of that, there’s still a big role that digital or a digital overlay will end up playing.

Gamble:  It sounds like the work you’re doing with innovation has really been educational for the organization.

Dworkin:  The good news about it is that we’re seeing lots of tertiary and quaternary benefits, which is something we really aim to do, because resources are so scarce and we have to make sure we’re managing the right opportunity costs. The staff who come to the Accelerator seem to leave with a little bit of a bounce in their step.

Let’s face it, we all have a tendency to imagine that the grass is greener on the other side. If you work for an organization and you get a paycheck and you have a day job, you imagine that working in a startup must be perfect, and vice-versa. This is giving folks who have wonderment and curiosity of how startups and entrepreneurs operate a chance to see a little bit of that. Sometimes they leave with their own ideas and want to apply them back into the core organization.

We’ve seen things we totally didn’t expect; one of which is we’ve been attracting companies from literally all over the globe — Australia, Germany, Poland and all sorts of great places, and it turns out that some of them want to stay. They’re coming to Los Angeles for the Accelerator program, and they’re moving here permanently. After they get the help they need, they’re growing their companies and we’re creating healthcare IT jobs in our area.

And so there are all these wonderful benefits to truly help hit multiple goals of ours, because at the end of the day, we are a community-based organization. We are a nonprofit, and being able to support the community and have some small part in growing the health IT ecosystem here in Los Angeles is rewarding, above and beyond some of the more immediate benefits we’re seeing from the companies we interact with.

Gamble:  Right. I know there are a few health systems across the country that offer some type of innovation lab, but this seems like it could be scalable across different organizations, even those that are smaller and have fewer resources.

Dworkin:  We think so. We’ve also adopted a few philosophies. One of them is that there’s really no such thing as competition to the Accelerator. We operate with a viewpoint that while there is a Cedars-Sinai Accelerator, it’s in an ecosystem across the country of all sorts of amazing big and little innovation initiatives. At the end of the day, rising water rises all boats, and so we’re just happy it’s becoming an interesting sector.

When we started this, the reality was that some of the smartest entrepreneurs we met weren’t even thinking about applying their time and attention to health IT. They were most likely going to build another game or a social media app. For a lot of these young entrepreneurs, healthcare is this confusing black box — they don’t really understand what it is. And the delivery of healthcare is even more confusing. As we’ve been able to illuminate that, people have gotten excited about it, and I believe the more that happens across the country, the more momentum it will get. There are plenty of new ideas and companies for everybody.

We’ve also really tried to make sure everybody knows they’re 100 percent welcome to use the space in any way they would like. There are a few dozen health systems that send people to our Accelerator. They come to our demo day, they speak with innovators, and we think it’s absolutely wonderful. The more, the merrier; the bigger we can grow the network and the ecosystem, the more we’re helping the industry as a whole. At the end of the day, it doesn’t really matter to us where a great company gets created, as long as great companies are being created to solve real problems in healthcare.

Gamble:  We’re starting to see more willingness to share ideas and best practices and less focus on competition, which is very encouraging. Now, you’ve been with the organization for about 12 years, correct?

Dworkin Indeed, I seem to be defying gravity.

Gamble:  That’s a very long tenure for a CIO. And this was your first CIO role?

Dworkin Correct, I was a CTO before that at Boston Medical Center.

Gamble:  What do you think has changed most about the CIO role during that 12-year span?

Dworkin As the CIO role continues to evolve, probably the biggest change I’ve seen is in regard to large EMR projects. I should back up first and point out that when I had my turn at the merry-go-round here at Cedars-Sinai to implement the EMR, we didn’t call it the EMR. We called it CPOE, which of course stands for computer physician order entry. But when we went live with our first phase, it only included a little bit of documentation, and so the bar was set really low.

As I speak with my CIO colleagues across the country, I’m amazed at the role they have — the objectives, the KPIs, the ROIs, and all the things they need to deliver on. Back when we installed the CPOE system or the EMR, our only goal was to go live and make sure it worked.

We had bigger aspirations, of course, that it would deliver all sorts of things. But when I look at projects today that are meant to reduce expenses, increase safety, and increase efficiency, that’s really challenging. And that’s not to say that over time, the EMR can’t accomplish them. But it was a little bit easier in the earlier days because we expected less of these IT systems. And while I am happy that the work has graduated up the C-suite and had visibility in terms of some of the benefits it can provide, we may be placing a little too much aspiration on what some of these IT systems can ultimately deliver.

Dworkin It wasn’t. Although in all fairness, the systems have gotten increasingly expensive to implement, and so the stakes naturally have risen around that.

Gamble:  When you think about where the industry is headed, what gets you most excited?

Dworkin I love thinking about the role that consumers and patients will play as time goes forward. For a long time, I think healthcare delivery organizations were so focused on the complexities and difficulties of implementing what the rest of the industry would refer to as enterprise software that we really got stuck for a while thinking that was the entire problem. The reality is that in addition to the very important work we’re doing with enterprise software like the EMRs, back office financials, and other systems, we’re also thinking forward in terms of the engagement patients — and frankly, consumers — will want to have as they look to have access to things that are natural in other aspects of their lives.

Gamble:  When you think back to the early days of portals and Google Health, it’s amazing how far things have come. It should be really interesting to see what happens in this field where we’re all consumers.

Dworkin Exactly. So many things have evolved in our digital lives where we prefer to interact via an application or a text message as opposed to a phone call or face-to-face interaction. I will confess, I’m guilty on occasion of choosing a restaurant because I don’t have to call for a reservation — I can do it via an app.

But I don’t think digital convenience has fully played out in healthcare. And of course, healthcare is different. The stakes are different. Not every patient is a consumer, and not every consumer is a patient. There are a lot of intricate and nuanced details that we need to manage; but with all of that, there’s still a big role that digital or a digital overlay will end up playing. When I think around those ideas, it’s very exciting. It’s a very exciting time.

Gamble:  I couldn’t agree more. Well, I think that’s a good place to wrap things up. I really want to thank you. It’s been really interesting to hear your perspective and about what Cedars-Sinai is doing, and I hope we can catch up again down the road.

Dworkin My pleasure, thank you.