Near 40 Vendor Vie for HIE Dominance

Among 38 potential service providers, only five were considered in more than 10 percent of buying decisions, according to a new KLAS report “Health Information Exchanges: Perception in an Expanding Frontier.”

Medicity was considered in 23 percent of HIE buying decisions, followed by Axolotl (22 percent), RelayHealth (16 percent), ICA (11 percent) and Epic (11 percent) — though at this point Epic is strongly considered only for Epic-to-Epic connections, according to KLAS. Among the 38 vendors referenced in the study, the following 10 were considered most often: Axolotl, Cerner, dbMotion, Epic, GE, ICA, InterSystems, Medicity, Orion and RelayHealth. 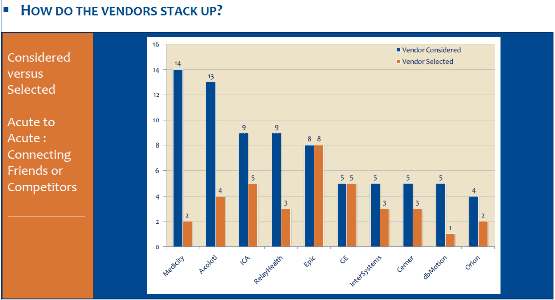 The KLAS report also notes how the structure and management of an HIE dictates, in part, the kind of solution a provider will consider:

The report examines the HIE software purchases or planned purchases of 95 healthcare providers.