It wasn’t the first time I’d received such a call.

It was early November and I was at the CHIME Fall Forum when my sister rang.

“Dad doesn’t feel well, and I think he should go to the hospital,” she said.

“Ok. Do whatever you think is best. I’m in Phoenix and won’t be back until Friday – just keep me in the loop,” I said.

My father has a long medical history of heart-related issues – mostly around the effects of high blood pressure and cholesterol. He had a heart operation in the ‘80s, another one about 20 years later and, after that, a ruptured aortic aneurysm that almost killed him in 2007. It’s important for this story to remember that his heart itself never sustained any significant damage, so his quality of life was excellent. He had no trouble walking or breathing and was an active real estate agent into his recently-entered 82 year.

Over the years I have literally received at least three phone calls from hospitals informing me (or my sister) that his time was about to be up – that we had better get to the bedside to say our final goodbyes – that this man who we joked had been granted the cat’s proverbial nine lives had run out. 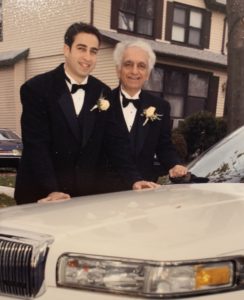 Dad and I at my sister’s wedding.

Again and again, however, he would show that he didn’t intend to fit anyone’s statistic of what someone in his condition should do, namely die. Nonetheless each time we’d get the call, we’d certainly believe it was the real deal and so rushed to the hospital to offer the tearful goodbyes that had been prescribed.

The evening I returned from CHIME, I took an Uber straight to the hospital and spent some time with him before heading home and passing out in bed (Phoenix to NJ is a long flight). Around 3 AM I got the familiar call from my sister.

“The hospital just called. They said dad isn’t doing well and we should prepare for the worst. They told us to come right away,” she said.

But when we got to the hospital, he looked, and sounded, pretty good.

Once again, the cat had shown his stuff.

Over the next few weeks, as we headed towards Thanksgiving, his condition hovered in a strange twilight where he didn’t seem to get better or worse – but the twilight state wasn’t a good one. 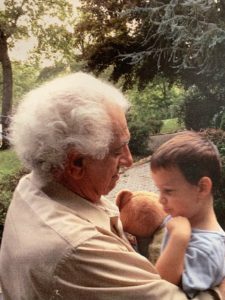 Dad with my son, Parker.

He was clearly in a life-or-death struggle brought on by a blood infection that had started the whole mess, but by father was no stranger to struggle. Unfortunately he seemed to be afflicted with a lifelong case of bad luck (and/or occasional bad judgment), especially when it came to money. He would come into some and invest it in the stock market only to see that market have a historic crash (think the 2000 dot.com bust). And so the struggle to make money, to pay bills and to get ahead was always on his mind. After 30 years in the embroidery industry, he spent the next 30 much happier (if not better off financially) as a real estate agent. On the positive side of the ledger, this was clearly a job he was born to do, bringing out all his natural talents and proclivities, including the love of being out and about, a fascination with property and houses, and a joy felt when interacting with people.

As he laid in the hospital during the first weeks of November, coming in and out of mental awareness, he once or twice repeated his favorite mantra, “Nothing is easy.” This was part of his favorite theme – “struggle.” Life is a constant struggle for survival in which nobody is giving Richard Guerra much of a break. Of course, what my father failed to realize in those moments was that life had given him quite a bit. He had an ex-wife (my mother) with whom he had a great relationship and who still loved him deeply, my sister and I (ditto) our spouses (ditto) and four grandsons (again, ditto).

Life had given us to him and he had given us a more joyful life. You see, Richard Guerra was the kind of many you wanted in the room, especially at a party, as he was full of joy, humor and kindness. The man never had a bad word to say about anyone. Perhaps not in cash, but in everything else that matters, his cup overflowed. 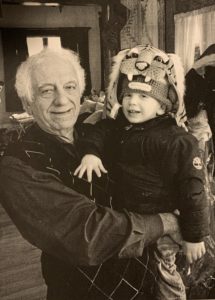 Dad with my son, Tyler.

The other thing my father uttered in his semi-lucid state brought me to the type of full sob I’ve indulged only a few times in my adult life. I was sitting by his bed and, though I don’t remember the context of why he said this, I saw him look up at me and whisper:

“My son – the businessman.”

You have to know my father to know how impactful this was. As I mentioned, the struggle for money was always foremost on his mind – every single day of his life. And, to him, there was no one to be more respected than “the businessman.” The man who made his own way. Though I’m far from what anyone who has an MBA would think of as a businessman, I knew what he was trying to say. I knew that he was proud of me, that he loved me, that it had all been done right – our relationship, that is – that we had each done our parts pretty darn well. And so, I lost it.

I went to see him on Tuesday, the 26th and had our usual visit. About two hours after I left, I was in front of house, alone, when my wife called from the hospital (she works where my father was receiving care.)

“Honey, your Dad coded about a half hour ago. He passed away.”

I could not speak, then managed a whisper: “What am I supposed to do?”

“Come to the hospital,” she said.

Yes, I knew I would go to the hospital and then I’d start to take care of business. That was what he always taught me. Get up, go to work, and keep at it.

But I also knew that for him, after 82 years, the great struggle over.