With a large majority (70 percent) of provider organizations now using mobile devices to access electronic records, security has become a top priority for CIOs, according to a new KLAS report — Mobile Applications: Can Enterprise Vendors Keep Up, which found that virtualization is the method most often used to address security concerns.

“Providers are very concerned about controlling what data is accessed, where it is stored, and how the data can be protected,” said Erik Westerlind, author of the report. “In addition, providers say that virtualization, encryption, and mobile device management applications are among the main solutions to combat some of these security concerns.”

According to the survey, the most commonly used method is virtualization software that presents clinical information on a mobile device but keeps the data from being stored on the device. Fifty-two percent of respondents cited virtualization as their security method, while 43 percent utilize encryption, and others rely on security measures built into individual mobile applications. However, even while utilizing multiple security measures, providers are still wary of the mobile environment in healthcare and are looking for a greater sense of security from their clinical vendors, KLAS noted. 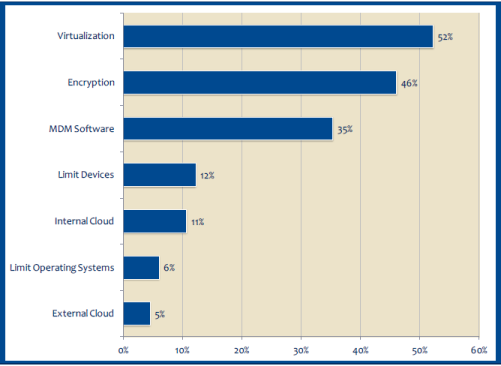 Other barriers providers face include difficulty or inability to input documentation, lack of optimization, limited functionality, and device displays that are too small or are not configured to show critical patient data. Providers said that inputting data using a mobile device is difficult, and while most mobile applications score high usability ratings, they typically don’t allow for data input.

The report found that nearly every major EMR (Epic, Cerner, GE, Allscripts, Siemens, MEDITECH, and McKesson) has customers that are accessing data via a mobile device. The trend toward a bring-your-own-device (BYOD) strategy is fueling Apple’s dominance, with most organizations (94 percent) in the study using Apple products. Android and Microsoft footprints take second and third, at 49 percent and 44 percent respectively, with organizations supporting those operating systems.