Certain phrases set off alarms for me. The one having the greatest impact begins with the words, “You can’t wear that…”

I may be a grammarian jihadist. The word ‘can’t’ makes me want to respond with, ‘yes, I can.’ Today, I was forced to respond to the phrase, ‘You can’t wear those shorts to the party.’

“They are wrinkled. You have to iron them.” She used the word iron as though it were a verb. As in, you iron; her, she, or it irons. I was not worried about the wrinkles. I am a guy. And since I was not headed to the award ceremony for the Nobel Prize, why would I be concerned about wrinkles? So why then am I the object of her sentence that used the verb iron?

Regardless of how I felt about the grammatical issues around can’t versus ‘may not’, and who, or should it be whom, was the object of the sentence, if you have been reading my blogging for a while, you know what happened next. I ironed my shorts. 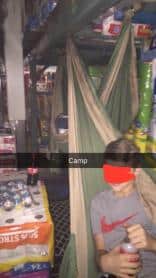 And so that was the earlier part of my Saturday. Later that day, my fourteen-year-old son texted me this photo, with the words, “For a dollar, you can guess where the photo was taken. If you are correct, I will pay you two dollars. Or, you can take two guesses for a three-dollar payment. And if you guess correctly, I will pay you four dollars.”

I learned later in the day that my son had offered the same odds to his friends through Instagram and Snapchat. He is running a numbers racket in suburban Philadelphia. I told his mom, the same lady who was worried about the wrinkles in my shorts, that he was simply testing his entrepreneurial genes. She probably thinks he got this gene from his dad, and she probably also thought his genes needed to be ironed. Neither he nor I was going to come out of this discussion on the right side of right and wrong.

It is his summer vacation. I will not tell you where the photo was taken, for if I did, and the store manager found out about it, instead of writing to you, I would probably be taking lessons in parenting. As you can see, he and a friend of his built a fort, inside a big-box store, inside the part of the store where bulk the bulk packages of paper towels are displayed, 32 rolls per package; 16 on the bottom and 16 on the top — you do the math, and let me know if you get a different number.

According to him, they constructed the fort by removing several dozen packages of paper towels from the center of the display, thus creating a hollow. Inside the hollow, they added chairs and a hammock, bought food and drinks, and they were good to go.

And management had no idea; it rarely does. Neither did the shoppers. Nobody knew what was going on behind the Bounty.

Personally, I think healthcare call centers were spun from fool’s gold with that same bit of capriciousness. Some in management have no idea that the call center exists. And if they were asked why they have a call center, they would be hard-pressed to come up with a reason much more in depth than, “Because people call us.”

Of those people, 21 spent the 60 seconds on their providers’ website. Collectively among them, they encountered more than 300 phone numbers. None of them found the correct phone number within the allotted time. The remaining five participants tried Google. All five found a phone number, but only one of the five found the right number. A four percent success rate — a little higher than my success rate as a ninth grader asking a girl to dance.

Not much of an ROI for building a call center. You could probably increase your ROI by building a fort made of paper towels.

Being a patient, a caregiver, a family member, or a referring physician can be exhausting. And so can trying to be a patient. It is exhausting because, in designing the means of access, nobody ever asked a patient or a caregiver or a prospective patient what those access points should be able to do. The access points, a health system’s website, and its call center were designed — and I use that term very loosely — by people who know about ones and zeroes, and by people who know about marketing.

They’ve never met one of your patients. Which explains the problem. Your health system, when it devised patient access, designed it using human design.

For patient access or patient experience or patient engagement or consumerism to be effective requires using human-centered design. It places the human at the center of the design. And here is the big point; the human who needs to be at the center of your system’s patient access design is not an IT wonk. Nor is it someone in your marketing group who has to rock her look in her Issey Miyake before she goes to her after work terrarium-making class.

The person who should be in the center of the design has a multiple-persona disorder; that person is a patient and a family member and a caregiver and a referring physician and a prospective patient. And that is why when you think about designing patient access, you need to do so from the perspective of the personas of each of those individuals.

There is a term I’ve coined for people who get exhausted trying to have their needs met by your organization.

I call those people somebody else’s patients.

So there you have it. I’d write more, but I am on my way to make a sub-rosa move to spirit my son out of the store before he is discovered.