I jumped up from the floor where I’d just started to doze off and ran to the alarm box, nearly knocking into the Pack-n-Play we were temporarily using as a crib for Parker, our one-and-half year old. I ran because I didn’t want the noise to wake him or Tyler (our three year old) who was sleeping on the pull-out couch with his mom. If you haven’t gotten the picture, we were all in the same room — the basement or lower level of our split-level home, which we deemed would be the safest place should another tree fall on the house. 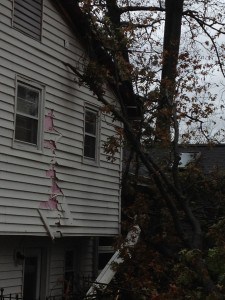 The day had been exhausting, courtesy of Hurricane Sandy, with my wife trying to keep the kids amused while I spent hours on the phone with the insurance company filing our claim, a contractor discussing the job to be done, and multiple tree-removal companies trying to get anyone on the phone. I’d also had to set up the generator because we had no power. By the time I laid down, I was shot, but then ….

I keyed in the alarm code to turn it off, which worked. I went back to bed.

“Oh my God,” I mouthed in the dark. I started Googling the issue, looking for a quick fix. What I found were some instructions for finding a control box and pulling wires, which I quickly knew was out of the question for me, just not my cup of tea. 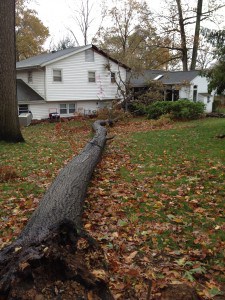 I shook my wife from her semi-coma-like normal state of sleep.

“The alarm keeps beeping and I can’t figure out how to make it stop,” I whispered. “I need the alarm company’s number.”

“Just go back to sleep,” she said, as nothing but one of those giant Japanese gongs can wake that woman.

“I can’t,” I said with desperation.

“Ok,” she huffed, and muttered something about it being in the boiler room as she stalked off into the darkness. She returned a few minutes later with a business card.

“This is some guy’s number,” I said, examining the card. “Don’t you have an 800 number or something?”

“That’s what I have,” she said, pulling the covers over herself as if to indicate the interview was over.

“Hi, Daddy,” said Tyler, peering up from between the blankets.

“Go back to bed munchkin,” I said, “everything’s all right.”

I rang “John” who, not surprisingly, didn’t pick up, but his message did offer a number to ring in case of emergencies. “Well,” I said to myself, “I guess John’s about to get a wake-up call.”

“Hello,” muttered a shallow voice, obviously stirred from its 4 AM slumber.

“Hi John,” I said, “Sorry to bother you, but your number is the only one I have. We lost power. The alarm keeps beeping and I can’t shut it off.”

After some Q&A, I found myself in front of the control box mentioned on the Internet.

“Go get a screwdriver,” he replied.

So after I unscrewed the control panel cover, I was staring at the tangle of wires that were also described in my online reading.

“Do you see where the wires go into the battery?” he asked.

“Yeah,” I said, concerned with where I saw this going.

“Disconnect the red or black one,” he instructed.

“Seriously?” I uttered, feeling like I’d come across this scene in a whole lot of movies.

After prying off one of the connections, the job was done.

“Thanks,” I said, genuinely appreciative he’d both picked up the phone and walked me through the fix.

By morning, my take on the whole experience had changed.

“The alarm company knew the whole area was going to get hit with this hurricane,” I said to my wife. “So they knew a ton of customers were going to lose power. And that means they knew almost all of us would not know how to stop the no-power beeping. It would have been really nice to get a call or some kind of communication with instructions on how to deal with this.”

“What can you do?” she said dismissively, indicating the interview was over.

Two days later, I received an email from Amazon indicating that, because of the bad weather, it was possible some socks I ordered might be late. In that one email, the company probably saved itself about a billion inquiries, and all it required was that they be in a proactive rather than reactive customer-service mindset.

One company sees a problem coming and hopes to dodge it. Even if it can’t, it figures dealing with the few nuts that do call at 4 AM is easier than communicating proactively with a thousand. The other company says, “We’re probably going to have some issues, let’s get ahead of this thing.”

Many service providers pride themselves on being lightning fast when it comes to dealing with customer problems, and that’s great, but it’s not the holy grail of service. It’s those who divert the train heading for the mountain that have truly achieved something special, not those that merely shine after the crash.