Conventional wisdom suggests that physician-based office practices have been slow to adopt Electronic Health Record (EHR) systems. According to a survey from 2007, the biggest barriers to adoption include the cost of initial capitalization (84% of respondents), start-up financial costs ongoing financial costs (82%), and loss of productivity (81%) for physician office settings (http://www.ncbi.nlm.nih.gov/pmc/articles/PMC2215070/?report=abstract).

There seems to be some headway in the adoption of minimal EHRs, and related applications such as E-Prescribing, but not fully functional EHRs. Some confusion revolves around what a ‘Complete and Certified’ EHR actually means.  In contrast to the Levels of Certification defined by the Certification Commission for Healthcare Information Technology (CCHIT®), the Office of the National Coordinator seems to be more open to a variety of approaches to reach the status of a “Complete EHR.”  The “Interim Final Rule” from the Office of the National Coordinator for Health Information Technology, Department of Health and Human Services, attempts to define “Qualified EHRs”, “EHR Modules” and “Complete (Certified) EHRs” (http://edocket.access.gpo.gov/2010/pdf/E9-31216.pdf).  Thus, although CCHIT® has contracts from Health and Human Services, many have questioned its neutrality because it is perceived to be an extension of the industry lobbying group Healthcare Information and Management Systems Society (HIMSS).  However, they have still played a role in the definition of “Meaningful Use” criteria, and constitute a major stakeholder in discussions for now.

Regardless of the level of Certification, some form of EHR is being adopted more broadly in physician office settings than many had anticipated. For example, Dr. David Blumenthal cites the recently released study from the Centers for Disease Control (CDC) focusing on adoption of EHRs in ambulatory care settings.  According to preliminary estimates from a 2009 mail survey, 43.9% of the physicians reported using all or partial EHR systems (not including systems used solely for billing) in their office-based practices, although few seemed to meet the criterion of a “Complete EHR system.” 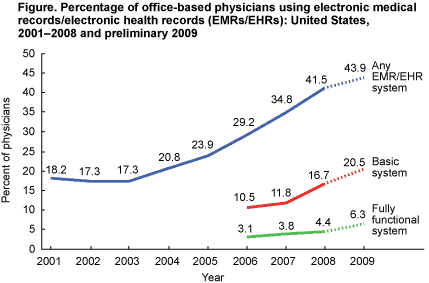