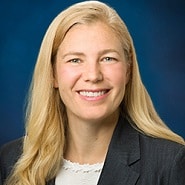 Of the many components needed to ensure a successful EHR implementation, one of the most important — and least recognized — is grace, according to Stacey Johnston, MD. As Chief Applications Officer and Epic Program Executive at Baptist Health, which recently marked a major milestone, she often reminds her teams to be patient with each other and themselves. This particularly holds true for those who have been pulled away from their everyday roles to serve as analysts. “You’re not going to be perfect,” she said during a podcast interview with Kate Gamble, Managing Editor at healthsystemCIO. “It’s a new skill you’re learning that will continue to improve over time.”

During the interview, she talked Baptist Health’s Epic journey — what they’ve done so far and what they need to do going forward, and what she considers to be the most important components of any major initiative.

Gamble:  I can imagine that comes with its challenges when you have 350 physicians and so many non-physicians. I’m sure there’s a learning curve in having so much involvement.

Johnston:  Yes, it really has been. We had done the entire implementation, start to finish, during the pandemic. Prior to Covid, we would have been meeting in person and in much smaller work groups. But because we had been meeting virtually from the beginning, our work groups could be larger.

That, of course, did have its own set of challenges, but considering the size of our workgroups, we were able to make decisions in a short timeframe. I was surprised; I thought the size of our work groups would slow us down — and actually, Epic even counseled us against it. But Baptist is such a collaborative hospital, and everyone wanted to participate. My mantra is, if you want to participate, let’s find you a seat at the table. And so, we did have much larger work groups than we previously had — and larger workgroups than was recommended — but because people were able to participate, I feel like we had a really transparent implementation. Everyone knew those concerns from the beginning and everyone knew the issues we were tracking. Doing it this way allowed people to voice their opinion and say, ‘I agree with the build,’ or ‘I disagree with this.’ It came with its challenges, but the benefits of doing it this way far exceeded any of the challenges we faced.

Gamble:  At your previous organizations, had you worked with Epic?

Johnston:  No. This was first foray into Epic. It’s funny just leading up the epic implementation when you’ve never used it before.

Gamble:  We’ve heard from countless different people that Epic wants you to stick to certain guidelines, so maybe it was a good thing that it was your first foray.

Johnston:  Exactly. I’ve led other implementations, but again, at smaller organizations. And so, the concepts stay the same. You want to lead by working with the people who use the system. The philosophy of empowering your work groups to make decisions is an Epic foundational mantra — but that’s also good change management. Enabling people who use the system to make the decisions on the build and the workflows allows for better efficiencies. It allows for better sustainability and long-term adoption of the system.

People who aren’t using the system — managers, directors or those who are one or two layers away from actually having their hands on the keyboard — shouldn’t be making the decisions for those who are doing the actual work. Of course, there’s support in having managers involved, but you want to make sure those with hands on the keyboard are able to participate. That’s how we ended up doing it. We had several managers and bedside caregivers participate because. It was about end users making the decisions.

Gamble:  With something like this, does the fact that you are a practicing hospitalist lend you some credibility? I would think that can be beneficial.

Johnston:  Exactly. I think it’s so important to have someone representing the system who can speak to the true clinical workflows happening in the current state, and who can understand the angst of the providers and caregivers. You need someone who understands how stressed caregivers are today — especially in a pandemic or post-pandemic state where staffing is an issue and people are fatigued. People are experiencing compassion fatigue; I’ve seen it firsthand working with providers. They’re so tired, and so, the last thing I want to do is add more to what they’re already doing. I’m trying to make it as easy as possible now. It’s not going to be perfect, but the more time I can spend focusing on individual workflows, the better I can understand where they’re getting stuck, and try to make it a little bit better for them.

Gamble:  And you’re very close to the Epic go-live?

Johnston:  We are. It’s crazy. My team has been working so hard. Honestly, I have the best team — everyone from the analysts to the directors. I’m so proud of them all. Many of them, as I mentioned earlier, had never done this before. I plucked some of the directors from operations and a few came from informatics, but none of them were directors over clinical information systems. None of them were managing analysts before, because we were very deliberate. We wanted our current directors to continue to manage the current state solutions, including Touchworks and Cerner, because this was going to be at least a two-year project. And so, we needed to make sure that our current systems were working well and were being maintained, the protocols were being updated, and order sets were continuing to be built.

It was a great opportunity for some other folks to be in the applications world. Some loved it so much that they’re staying on and some realized that they loved it for this journey, but that they’re definitely ready to go back to operations.

Gamble:  I’m sure that’s going to be a mixed bag.

Johnston:  Exactly. It’s interesting; all of my analysts have chosen to stay, which is very cool. We did have one clinical informaticist who went back to that, but every analyst we pulled from the beside and from revenue cycle are staying.

Gamble:  I guess that shows they’re clearly engaged and invested. So, the last thing I wanted to talk about is that in the midst of this, you’ve also served as Board Chair of AEHIA. What made you interested in that organization?

Johnson:  I’ve always been very inwardly focused at every organization I’ve been part of, and I’ve have tried to give back wherever I can. At my previous organization, I was CMIO and medical director of the hospitalist program, and I was on the hospital board. When I came here, I wanted to grow within the organization and give back all that I can. Soon after, Aaron Miri, our new chief digital information officer, introduced me to David Finn, VP of AEHIA, AEHIT and AEHIS, and encouraged me to look at options to take on some more outwardly facing roles and put myself out there.

I told David I’d be happy to learn more and let him know I was available to volunteer. I was thinking maybe I’d be asked to sit on the board. I have no idea he would ask me to run for board chair. But the opportunity became available, and they liked my background with the intersection of application, informatics, and clinicals, and so I accepted.

We recently had our first board meeting. I’m really looking to regroup, reset and reengage. Applications is so different now. When it first started all those years ago, it was about implementations and standing up new EHRs, whereas now, it’s more about data sharing, workflow enhancements, and optimization. I’m really excited to take the role into the next generation of applications.

Fortunately, they’ve given me a little bit of grace during our Epic go-live. After that, we’ll focus on rebranding, looking at opportunities for new members, and garnering a new wave of excitement around where applications and date meet, as well as the role of informatics in applications.

Gamble:  It sounds like a great opportunity. Sometimes timing can be tricky, but it sounds like in this case they were able to give you the time you needed. I’m sure this will be a great chance to collaborate and network.

Johnston:  I’m really excited. I’m honestly so honored that they considered me for this position. And I’m excited that the remaining board member said they would be happy to serve alongside me while we work to get the group back together.

Gamble:  Okay. Well, we’ve definitely covered a lot. I want to thank you so much for your time. This has been great.

Johnston:  No problem. Thank you so much.