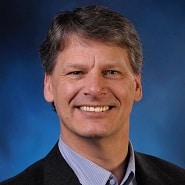 Perhaps no industry has been hit harder by the great resignation than healthcare. And if qualified technology and clinical people aren’t quitting altogether, they’re being lured elsewhere by bigger paychecks and more flexibility.

That being considered, it may seem surprising that Hospital Sisters Health System, a 15-hospital network spanning multiple states, has made it a goal to grow 70 percent of leaders from inside the organization. If you look at the facts, however, it makes perfect sense. According to Ray Gensinger, MD, the IT team boasts the lowest turnover rate in the company, and the second-highest engagement scores.

Clearly, they’re doing something right, and it’s all about the people. HSHS prides itself on choosing individuals who are “compassionate” about patient care and willing to do hard work, said Gensinger. In a recent interview, he talked about what makes the organization unique (both in its makeup and vision), how he transitioned from CMIO to CIO, why support is such a critical part of implementations, and his thoughts on remote versus in-person work models.

Gamble:  We’re seeing so many remote and hybrid working models, and I’m thinking HSHS is probably no different. Is your team remote at this point?

Gensinger:  It’s funny; we were trying to get our people remote for years. It took a pandemic to provide it could work. Probably 90 percent of my staff are remote right now.

Gamble:  Do you see it staying that way?

Gensinger:  I think it’s going to flip back to more of a hybrid environment. I really do. If I had my way, I’d ask people to come in three days a week: Tuesday, Wednesday, and Thursday. The big push for us was real estate value. If we could keep people remote permanently, we’d be able to save money. We did actually sublet a floor in one of our buildings and moved people around. That was definitely an advantage in terms of costs.

And even if people don’t have permanent spaces, there are other things you can do like rotate teams. I’m a typical IT introvert, but I believe there’s something to be said for getting together in person.

A few weeks ago, we held a celebration for our staff. During Covid, we had completed three major implementations that were part of a multi-year project. We never had a chance to celebrate that, plus we missed two Christmas parties because of the pandemic. And so, I’ve been on a tour with some of my leaders to get people together. We’ve had happy hours where we buy drinks and food and let people spend time together, and the response has been overwhelming. People are so happy to get back out and interact. They’ve really missed that. And so, while I think there are certainly benefits to working from home, people also realize that there’s a loss that comes with it.

Gamble:  Very interesting. During one of our recent webinars, one speaker recommended starting with social functions to get people together, and going from there. The idea is to take it one step at a time.

Gensinger:  We’re starting to hire people in other states who are fully remote, which is very different from what we’ve done. It becomes a dilemma when people from outside of our immediate geography want to come to a Christmas party; that’s something we’re learning to deal with.

Gamble:  Sure. Where are you actually based?

Gensinger:  Our corporate offices are located just outside of Springfield, Illinois. That’s where most of our leaders are based, except for those who run the Wisconsin division — they’re in Green Bay.

Gamble:  Just for some background, HSHS has 15 hospitals located in Illinois and Wisconsin, along with a couple hundred clinics, correct?

Gamble:  And you have two division CIOs? How does that work?

Gensinger:  We’ve done some consolidating. I’m the system CIO, and we have two divisional information officers: one covers Illinois and the other covers Wisconsin. It’s a geographic distribution, but we’ve also made it a functional distribution.

The Illinois CIO actually has responsibilities for all things that would fall into the business systems category, and the Wisconsin CIO has everything under clinical systems.

Gamble:  That seems like a smart way to break it down. Has it been structured that way for a while?

Gensinger:  We’ve been doing a lot of consolidating. We used to have CIOs at every hospital and at the corporate level, and we’ve slowly been consolidating that down. When I started here, it was myself and five additional CIOs. Now we have a total of three. I also have two VPs: one is my chief technology officer, who handles all things infrastructure, and my chief performance improvement officer, a pharmacist who has responsibility for training, support, and optimization. Her bailiwick is not to get the system in, but to get it operating to its 98th percentile.

Gamble:  Does that help in terms of maintaining alignment with the overall strategy?

Gensinger:  It does. A lot of organizations might ask whether the IT department needs its own strategic plan. I’m an anti-strategic plan person; on one hand, because of the amount of work it takes to build and maintain. But from an IT perspective, the only thing you need an IT strategy for is infrastructure — making sure you have a plan for the data center, networking, redundancy, and data recovery elements, as well as information security. We have a very specific plan laid out from an information security perspective.

But in terms of the functional applications that support the care process — including both financial and clinical — it makes far more sense to have the system’s priorities and strategic plan aligning and driving everything we do. They set the priorities, and we identify the projects that need to get laid out and propose them. And we work in tandem to make sure the most valuable efforts get done in any given year.

Gamble:  As far as the application environment, is everything on Epic at this point?

Gensinger:  Yes. We just brought our last two hospitals up on Epic in January. So now, every one of our hospitals and clinics are on Epic. As you know, Epic has a lot of specialty modules. Some of those we already have in place, others are coming in the future, and we’ll roll those out as they’re ready to be utilized. We still have a fair number of unique departmental applications in spaces in which Epic isn’t necessarily considered the leader. There are a few circumstances where it didn’t make economic sense to convert to Epic. For example, we use Sunquest in our laboratories, rather than switching to Beaker. The return on investment is more than 10 years, and so, it just didn’t seem like the right capital investment. We’re happy where we are.

Gamble:  So it’s been a multi-year effort. Is that part of why you were brought on board?

Gensinger:  Yes. I had two successful hospital system transitions from legacy EHRs to Epic under my belt. But I was just the pretty face; the people did the work. I had good people who got it done. That experience was the first reason.

The second is my clinical background, which lends a legitimacy to the work being done. At least from a clinician perspective, they trust that I’m going to be watching out for them. Many people aren’t aware of this, but the people you really need to take care of in the hospital are nurses. Ninety percent of the care, the documentation, the services, the attention, and the handholding — that’s all nursing.

We had to get doctors to stop writing on paper. That was the hard piece. But all of the efficiencies really need to be with caregivers in the hospital other than physicians.

Gamble:  Is that something you learned during your clinical experience?

Gensinger:  It’s funny; when you’re in medical school, you’re literally a student on Friday and a resident on Saturday. I stayed at the same organization. My first night on call was in the ICU, and a nurse got in my face and said, ‘you didn’t learn jack over the last four years; you better pay attention to me. I’m going to teach you what you need to know, and you have about a week to learn it.’

A lot of people might have shrugged that off, but I took it to heart, and it probably made all the difference in how I’ve been able to progress in my career.

Gamble:  And I can imagine the experience helped in how you approach the EHR training process.

Gensinger:  To be honest, despite three tries, I didn’t feel like I truly cracked the training code. I know what needs to be done. The Epic trainers are amazing at pointing out, ‘here are the menus and here’s where you document,’ but they don’t tell you how to do your job. If my job is to admit a patient, what steps do I need to go through to do that? If I’m transferring a patient from the ER to the floor, what does the person in the ER need to do so that the person on the floor can follow the next steps? We struggled with that.

Part of it is just because in order to do that effectively, your classes need to be much smaller. I can train every nurse if I’m merely showing them where the buttons are. But if I’m training an ICU workflow, I can’t take all the nurses off the floor at the same time. I can probably only tap into one or two at a time. And so, you suddenly go from classes with 20 people to classes with two or four people, and you can see very quickly where the math goes.

What I did better the third time around was outsource support to a company I have great experience with. Those individuals were able to very quickly to assist the clinicians with, ‘here are tools’ and ‘here’s how to use them.’ They sat down with them on day one and actually showed them onsite how to do that.

Actually, I had two different groups. One was focused specifically on physicians and another was focused on everybody else. In both cases, it was money well spent. With each go-live, we invested millions of dollars in the support infrastructure, and it’s probably the single best investment we made during the course of the implementation.