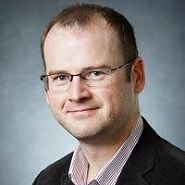 When Dustin Hufford was named full-time CIO at Cooper University Health Care — after serving as AVP of IT applications and interim CIO — he was ready to hit the ground running. “If I get this, we’re going to jump right into strategy development,” he recalled thinking.

That was in December of 2019, which meant just a handful of weeks passed before his team had to pivot to focus on facilitating new models of care delivery. Like so many other leaders, he realized how quickly things happened when there was a single objective, and so, when it was time to reassess priorities, Hufford adopted a new strategy: agility.

“We were able to move quickly,” he said during an interview with Kate Gamble, Managing Editor of healthsystemCIO. “That’s what we’re trying to harness. How do we get to that level of focus and attention? We think agile is a way to do that.”

During the discussion, Hufford talked about the foundational work his team is doing to take on a new approach, and why they’re flipping the traditional IT governance model. He also discussed the challenges of retaining staff in a competitive market, how he has benefited from his experience with community hospitals, and Cooper’s ultimate goal of improving access to care.

Gamble:  You mentioned strengthening the staff as one of your goals. That’s been an issue for so many organizations. What are you doing to recruit and retain people?

Hoffman:  A couple of things. One is to treat our staff like the professionals they are — not micromanage them, but empower them to make decisions. We also use rounding. For instance, I meet with our team in larger groups, and we do a session where I meet with subsections of the team to go over our strategy and make sure they understand where we are.

It also gives them a chance to ask me tough questions, and I answer in short order. This helps make sure they’re comfortable the things we’re doing in our world. We engage with them as much as possible, which has helped a lot in keeping our scores high.

It has also kept our turnover rate low. The rate of turnover for people within the first year of employment was a little bit higher than we would have liked. A lot of people are shifting around in the market trying to figure out what works for them, whether it’s consulting or part-time employment. But our staff retention for people who have been here longer than a year has been extremely tight. We’ve it at a very low number.

The other pillar, outside of engagement, is the remote work piece. We had planned to bring people back onsite, but we got a pretty strong response from our staff that this is not the way the world is working, and we needed something more flexible.

We listened, and we decided to keep the majority of our staff working remotely. That has helped a lot, because a lot of the health systems in the region — or even nationally — have been on the fence. ‘We might come back three days a week’ or ‘we might go back to what we were doing before,’ but it hasn’t been clearly communicated in a lot of cases. And so, it’s been to our advantage that we’ve communicated our plans to keep the remote work function in place.

We’re also hiring outside the region. I’ve heard some different opinions on that, but we’ve found it has worked pretty well. The people we’ve hired from out of state or out of the region have been very productive and have integrated well with our teams. You have to have a really strong onboarding process to make sure that they get to meet everyone, and hopefully get them on site at least once or twice in that first year to see people in person and get to know the team.

It’s gone well. And obviously that broadens our horizon in terms of how fast we can fill positions.

Gamble:  Right. And being located close to Philadelphia and not that far from New York, I’m sure offering flexibility is a strong selling point.

Hoffman:  Correct. And we’re competing with salaries from the Philadelphia market. That’s where engagement is really important. We might not always be able to beat them on salary, but a reputation of taking care of our people has helped, at least during this rough period of the last two years.

Gamble:  So you’ve been with Cooper since 2015, starting as AVP of IT applications, and then a few years later stepping into the interim CIO role. Talk about what that was like.

Hufford:  I had previously been a CIO, albeit for a smaller organization. I was excited to get back into the role, because I think it fits me well. I was definitely excited. When the opportunity came up, I had been in the interim role for about 8 months or so. It took a while to do the search.

Our board was very engaged in the process; they wanted to make sure they got the right person, because of everything going on in the cybersecurity world. We had also had some rough patches from an IT perspective in terms of stability, and so they really wanted to pause and make sure they did a thorough search. They did retain outside help to make sure the vetting was done properly, and in the end, it worked out. I was very happy to take on the full-time role once that process concluded.

That was at the end of 2019. I had all of these plans; I remember thinking, ‘if I get this, we’re going to jump right into strategy development.’ I had plans to engage an external firm to help conduct that strategy review and socialize it. And then in February, as you know, the pandemic happened.

A lot of interesting challenges came out of that. It was definitely a team-building opportunity, and there’s been a lot to work on during the past few years.

Gamble:  Sure. And even though you faced an enormous challenge, I imagine it helped that you were at least familiar with the organization. I’m sure it was better than starting fresh somewhere.

Hufford:  Yes. That would’ve been a lot more challenging.

Gamble:  So you did hold a CIO role at a smaller organization, and you’ve also worked in other roles and other areas, like revenue cycle. How has that experience benefited you?

Hufford:  Being CIO of a small community hospital was definitely a great experience. Because it’s a small team, you have to get your hands into everything, and you gain a deep knowledge of all the different IT domains.

When I was with Memorial, we were still coming off the 2009 legislation encourage and then requiring the use of EMRs and CPOE, etc. And so, I had to put together a plan to meet all of those objectives for Meaningful Use and refresh the entire architecture. It was a lot of working with third party vendors to accomplish all those goals. It was a lot of negotiating and managing large-scale projects.

We met all of the objectives for Meaningful Use, and then Memorial decided to join ProMedica as we were wrapping up that large project to overhaul the entire IT infrastructure. When we joined Promedica, I was lucky in that they were system shopping. They were a McKesson Horizon customer, and this was right around the time when McKesson announced it was no longer going to support Horizon products long-term; they wanted their customers to move to Paragon.

Interestingly, Memorial was a Paragon customer, and so, as we were coming into the system, ProMedica wanted to see if it could work with a multi-hospital system. Ultimately, we determined that it really wasn’t geared toward large systems or multi-hospital systems. Most of the users were single facility or community hospitals.

And so, we ended up choosing Epic within a few months of joining them. We had already been talking to them for a while. When you go through those processes around joining a large health system, there’s all the typical merger and acquisition work where they have to really evaluate the finances and operations to make a decision. That process took about a year. And so, I had already gotten to know a lot of the IT folks from ProMedica and some of their executives. That really helped bring Memorial into the system once that deal closed, both culturally and technically. It was a good experience.

Gamble:  We’re seeing so many different paths to the CIO role. And they all have their advantages and disadvantages, but it seems like getting experience with different parts of the organization and different initiatives is a good background.

We’ve chosen to keep digital within IT, but have tried, through operating models and different techniques, to embrace what would come from a separate chief digital officer, which is really just a tight partnership with business operations. So far, it’s worked out pretty well for us.