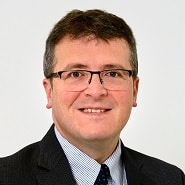 Can growing up in a multicultural, bilingual (or polylingual) household help to prepare you for a career in Applied Clinical Informatics? In today’s post, I’ll explain why I believe the answer is yes.

Almost all of my Applied Clinical Informatics colleagues I’ve met over the years have amazing educational and experiential backgrounds. However, I’ve noticed that a surprising number of them also come from multicultural backgrounds, where they grew up speaking multiple languages. 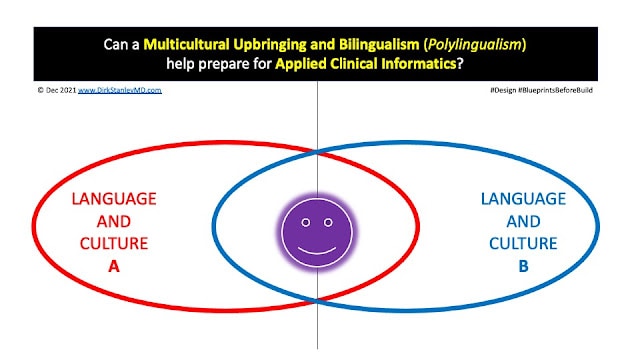 In full disclosure, I don’t have great data to support this claim. And I might be biased (or more sensitive) to this issue because I grew up in a polylingual household myself, the son of a German immigrant mother and a polyglot American father, who counted German as one of this favorite and most fluent languages.

My father’s passion for languages started as a high school student in Yonkers, N.Y., and would continue to develop until he became a Military Policeman for the US Army in Germany, where he also served as a court interpreter. This would also eventually lead him to meet my mother (who had immigrated from Herford, Germany to Westchester County, N.Y.), and to a future career as a high school language teacher at White Plains High School.

And so, with parents like these, I grew up in a multicultural, multilingual household, where we commonly spoke German at home, and then spoke English when other people came to visit our house. Vacations were often spent visiting relatives in Germany, immersed in German language and culture, before returning to America and resuming daily activities in English.

Given my father’s interpreter experiences, he always took languages and translation very seriously. Growing up outside of NYC in the 1970s and 1980s, he would occasionally take me into the city to the United Nations, to learn about and watch the famous UN Interpreter pool at work. Over our dinner table, we would often discuss the inseparable bond between culture and language, the real responsibilities of professional interpreters, and the occasional fallibility of both written and spoken words.

This sort of cross-cultural upbringing led me to some frequent challenges, that most multicultural people can probably relate to:

I didn’t fully appreciate this sort of multicultural upbringing until I was older and learned that not everyone struggled with (or learned to manage) these types of issues.

One thing you learn from this sort of cross-cultural upbringing is that communication is actually much frailer and more fragile than you might imagine. Success often depends on a number of factors helping you achieve a desired comprehension rate: 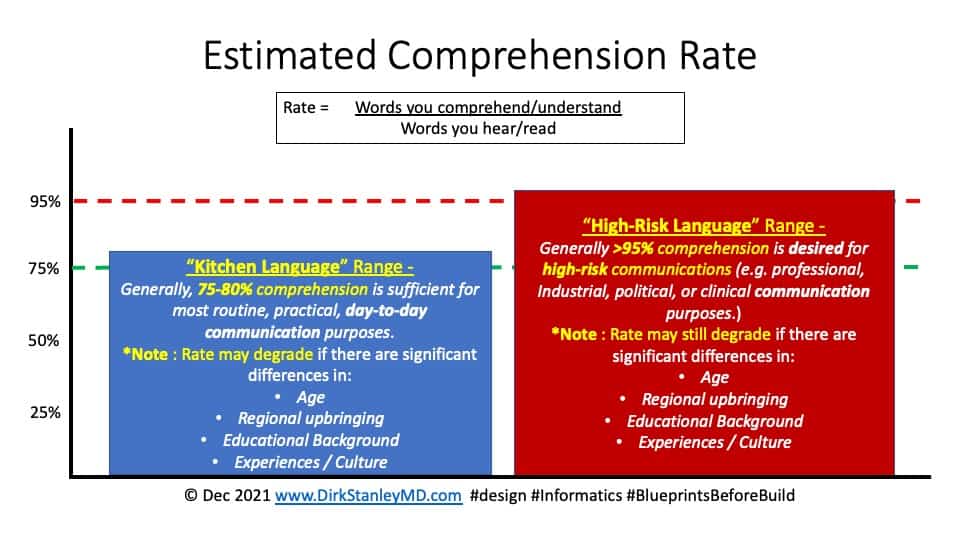 For most routine, practical, day-to-day communications, about 75 to 80 percent comprehension is fine. Typically, your brain fills in the gaps (without your awareness), and you usually don’t even notice the small details you might have missed. It still gets you to work, gets you to dinner on time, lets you order food at restaurants, and lets you manage your typical day-to-day activities. Informally, I personally refer to this as “Kitchen Language,” since it’s what you’d typically hear in a kitchen when people are making dinner and talking about their day. Failures sometimes happen; when they do, they usually only result in some brief confusion, such as a wrong or forgotten birthday gift, or an impromptu discussion about ‘ineffective communication’ from a loved one. After a little more discussion, the error or conflict usually gets resolved. Failure is usually pretty well-tolerated.

And then there is another standard, which I informally call “High Risk Language.” This is where failure is NOT well-tolerated, and so additional work and terminology are commonly required to help ensure a higher accuracy rate (typically >90 to 95 percent). Political, industrial, and clinical discussions all fall into this range. Successfully navigating High-Risk Language often requires additional analysis/planning, work, and often even new terminology that both sides (separately) agree to and understand, to help align concepts for effective cross-cultural communication.

*Interesting historical sidenote: Ever wonder about the June 1961 Cuban Missile summit between Kennedy and Kruschev? Viktor Sukhodrev was the interpreter. Talk about responsibility for ensuring both accurate translation and comprehension!

Don’t believe me that age is an important factor in effective communication, even in the same language? Check out this Saturday Night Live skit, “Gen Z Hospital.” Your appreciation of this skit will largely depend on the year you were born. Similarly, different upbringings, experiences, education, and culture can also quietly degrade comprehension rates, sometimes to the point of failure. (Applied Clinical Informaticists often see this cultural boundary when translating across clinical and administrative realms, which both have their own culture and terminology.)

And so, to overcome these differences across different languages — for both Kitchen Language and High-Risk Language scenarios — good interpreters need to know how different people speak and write. They need to know different cultures and subcultures, and the specific context and nuances of the language they use in each culture.

I think this may be why I notice a lot of multicultural, polylingual people in Applied Clinical Informatics. Even in English, this sort of cross-cultural interpretation requires an understanding of two different cultures: Clinical and Information Technology (IT). 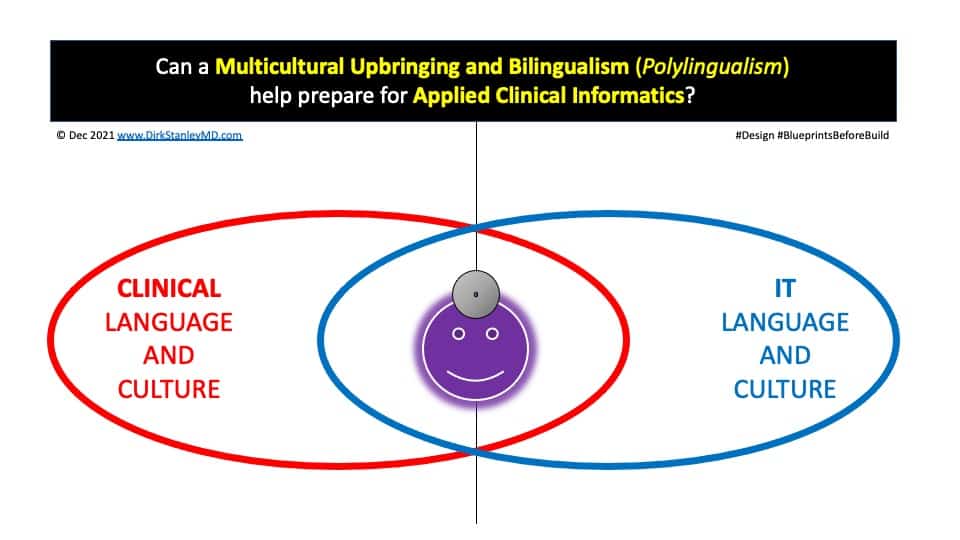 And then once you have mastered the art of interpreting the culture and language of both sides, you can then become even more helpful when you add clinical architecture to your repertoire, developing new terminology and documented ‘blueprints’ that meet the needs of both sides: 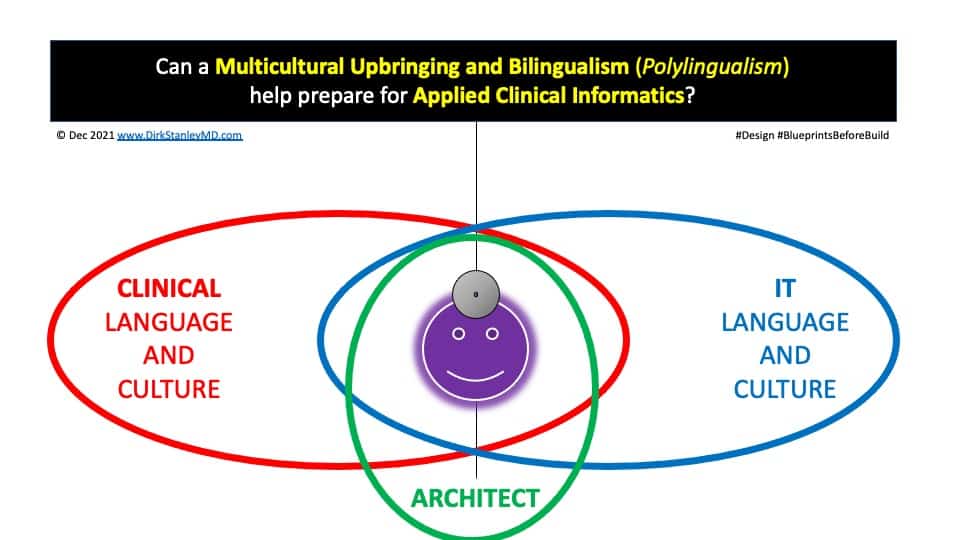 In closing, I’d say a bilingual (or polylingual), multicultural upbringing can serve as an excellent model for the same interpretation functions that Applied Clinical Informaticists provide in their daily work. It would be interesting to do some formal research into these concepts, to help confirm the value of this sort of early training.

This piece was written Dirk Stanley, MD, a board-certified hospitalist, informaticist, workflow designer, and CMIO, on his blog, CMIO Perspective. To follow him on Twitter, click here.