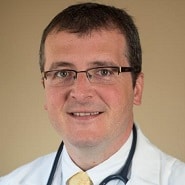 One of the most important components of the CMIO role is to act as a bridge between two worlds — clinical and IT — that can seem worlds apart, at times. It requires a willingness and ability to “listen to what people in IT are saying and translate it into clinical speak, and then translate clinical speak into IT language.”

It’s the type of skill that doesn’t come naturally for most people. It did, however, for Dirk Stanley, MD, who grew up in a bilingual household, with an American father (who was a former military interpreter) and a German mother. “I learned how to translate from one culture to the other.”

Recently, Stanley spoke with Kate Gamble about his key objectives as CMIO at UConn Health, how he has incorporated the concept of Blueprints Before Build into the strategy, and what he believes are the keys to securing buy-in from end users. He also discussed his early career frustrations as someone who was interested in both clinical and IT — but felt like an outsider in both worlds, and why he chose to start a blog.

Gamble:  Hi Dirk, thanks so much for taking the time to speak. Let’s start with the high-level overview of UConn Health.

Gamble:  Let’s talk about what you’re focused on now. What are your key priorities?

Stanley:  As CMIO, my focus is on the physicians, nurses, pharmacists — all of those on the frontline, making sure they have the tools and the support they need to deliver great patient care through our toolboxes.

One thing I strongly believe in is making blueprints before you build; I even created the Twitter hashtag, #BlueprintsBeforeBuild. The premise is, before you start any configuration, you have to know what problem you’re trying to solve, who are the people involved in the workflow, and in what sequences doctors, nurses and pharmacists are interacting with each other. You have to go through that rigorous analysis before you start your build.

The other thing blueprints do is allow you to create a tabletop walkthrough of what the future state workflow is going to be, and make sure you have alignment. It’s like that concept of trying to get all if the cats marching in the same direction; there’s nothing better than having an actual written document that explains who’s going to do which step in the process and makes sure they agree to do those steps. Not only do the blueprints create that agreement, but they also make it easier for analysts so that they’re not rebuilding things over and over again.

This way, we don’t have the surprises that happen when one doctor has good ideas, but hasn’t enlisted the others to make sure that they all agree. Good ideas can go wrong if you don’t have the necessary buy-in before the implementation. By making sure you have blueprints before the build, you can make sure there is adequate buy-in.

“They all start as blueprints”

Gamble:  I would imagine it can be challenging to implement this strategy, especially since it’s not the way things have been done.

Stanley:  Sometimes you have to change your configuration. We’ve had to take things out of production at the same time we’re putting new things in. It’s not any different than how we build houses, cars and bridges. They all start as blueprints. My job as a clinical informaticist is to meet with the homeowners — or, in this case, the clinical users — on the frontend and ask them, what do you want your home to look like? Is it a one-story house? A two-story house? Is the kitchen going to be on the ground floor? You need to understand what they want to use the house for. Is it for elderly people? Is it for young kids? You have to know who is going to live there and how they plan to use it before you can come up with a set of blueprints. Once you show people the blueprints, you can see them get excited. And that’s how you start securing buy-in.

Optimization: “The first thing is knowing what to work on”

Gamble:  Let’s talk about EHR optimization. What’s your approach when it comes to that—is it an ongoing effort?

Stanley:  Optimization is such a big discussion. It’s several different discussions. There’s the routine upkeep and maintenance of everything you’ve configured, and then there’s the stuff that needs to be like reevaluated and rebuilt. We have a lot of both.

The first thing is knowing what to work on. That requires a whole infrastructure — how do you identify what needs upkeep, what needs real repair and what needs a redo? For that, you need intake processes, project management and governance to decide what are the high priorities for the institution. Once you have that infrastructure and that governance built, you know what to work on. And you at least have priorities so that you know how many hours to spend on Project A versus Project B.

I would also say that you can’t do it without a good project management team. You need people who really understand how to manage all of the deliverables and the stakeholders, and make sure people stay on their timeline. From a clinical informatics standpoint, I’m one of the first people to look at things like the current state workflow, understand the current workflow and documenting it. That’s your point A. If you’re trying to get from point A to point B, you need to first establish point A. After I’ve identified that, as well as who the stakeholders are, I can meet with them and determine where to go next.

Once I have a good vision of how to get from point A to point B, I can go back to our project management team and other leaders to discuss what deliverables we’re going to focus on, who the stakeholders are, and what the project will look like. For example, can we do it as one project or do we need to break it up into different parts? Then we set up an engagement strategy with leaders in those areas, so that they understand both point A and point B, and are in agreement on how to move from one to the other. I’m involved in a lot in the early analysis and then the development and execution of these projects.

Gamble:  It’s understandable why it is such a big priority and why it’s necessary to make sure that the systems are as user-friendly as possible, but not to the detriment of the IT organization.

Stanley:  It’s a lot to maintain. When you think about an average healthcare institution, you’re talking about everything; that includes the ICU, inpatient units, labor and delivery, psyche, the emergency department, operating rooms, procedural areas, clinics, and offsite care. You might even have hospice or nursing home workers. And each of these groups has it own tools. Every time a medical journal gets published, there are people publishing evidence as to why you need to update those tools. It’s like you’re Grand Central Station, and every train is trying to get through. It’s being a conductor and saying, ‘okay, if we move this person through, then that person has to wait.’ It’s a lot of coordination.

Gamble:  I can imagine. How do you go about managing requests that come in? Does that fall under your purview?

Stanley:  No, I don’t really manage the prioritization committee. It’s largely our senior leadership who are responsible for the overall operations of the organization. I work with our IT team and our clinical leaders to prepare things for that committee, but ultimately, it’s their decision.

For example, if project A and project B need to shift positions, they’re the ones who have to decide which project crosses the finish line next. We have an IT prioritization committee that’s largely populated with the leadership of our hospital; they continuously meet with the head of our project management to look the projects in progress and the projects being queued up, and then make the decisions.

EHR migrations: “Just getting operational is a phenomenal amount of work”

Gamble:  With all the mergers and acquisitions going on right now, a lot of leaders find themselves going through EHR migrations. Can you talk about your own experience with the Epic rollout? What were some things your team did right or wrong?

Stanley:  The first thing I would say is that just getting operational is a phenomenal amount of work. I work very closely with leadership — and not just clinical leadership, but also finance, medical records, and even human resources. When new people are hired, how do they get passwords and security access to certain accounts? Just managing the large volume of conversations around a go-live is a monumental task.

I’m happy to report that in April of 2018, we were able to do that. A lot of the optimization efforts in which we’re currently engaged are related to either the routine bread-and-butter optimization that comes with honing any clinical content, or the updates that need to happen. There are new drugs on the market, new machines, and new equipment. That’s a lot of it.

Sometimes during that process, we uncover things that really need to be optimized before the Epic go-live. In some cases, we were able to do that. In other cases, though, time didn’t really permit us to do that, and so we’re engaged in optimizing those processes now.

Gamble:  It seems like that’s a fine example where you’re talking about blueprint before build, I’m sure that really comes into play.

Stanley:  Yes. Because without blueprints, it’s easy to miss a room. You can build a house and then realize you left a space for a kitchen but didn’t actually build a kitchen. As a physician, it’s very frustrating when you’re trying to take care of the patient sitting in front of you and there’s a missing step in the process. Doctors, nurses and pharmacists will overcome that missing step. They’ll pick up the phone. They’ll send the email.  They’ll do whatever it takes to make sure the patient gets the care that they need. If they have to order a procedure and it takes like multiple phone calls to make sure it happens, or that the necessary authorizations have been obtained or the scheduling has been correctly done, they’ll do it. But it’s frustrating, and we need to make sure that when we arrive at point B, every step of the workflow has been accounted for.

There’s a whole rigor of change management; when you’re testing something that’s about to be put into production, you want to make sure not just that you’re doing unit testing, integrated testing and regression testing — you also need to do end-user acceptance testing. And you need to make sure those four testing steps are included before you roll it out. That’s really helpful in making sure that you’ve covered the entire workflow.

Gamble:  End-user acceptance seems like something that can be really tricky, especially when you’re dealing with different personalities. Any thoughts on how that can be approached?

Stanley:  It’s very, very complicated. Even inside the same department, doctors and nurses may not agree on what the best solution is. We usually start with frontline providers — the physicians, nurses and pharmacists who are involved in the workflow. If they can’t come to an agreement, we have to escalate it to their bosses and their department chiefs and plan a meeting to discuss how we’re going to do this moving forward. They play an important role in getting alignment, and ultimately, getting people to sign off on the blueprints.