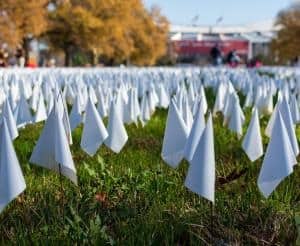 “Must be Memorial Day.”

It’s becoming a running joke in my house that when we start seeing banners being towed by small planes advertising everything from hospitals to happy hour deals at local restaurants, summer at the New Jersey shore has unofficially began. As a full-time resident of a vacation spot, I must admit that I associate the words ‘Memorial Day’ with the traffic, crowded beaches, and loss of quiet we’ll be dealing with for the next few months.

Of course, I realize that’s not what it’s about. But the more I thought about it, the more I realize how little I know about a holiday that’s observed so widely across the United States, and so I did a little research (thank you, History Channel!), and learned the following:

What it’s about, I’ve learned, is providing an opportunity to acknowledge those who gave their lives for a bigger cause. By reading their names or looking at the photos of those who served, we’re able to commemorate fallen soldiers, which is extremely important.

It’s just as important, I believe, to commemorate those who have sacrificed their lives in the fight against Covid-19. And there have been far too many. According to “Lost on the Frontline,” a 12-month investigation by the Guardian and KHN, more than 3,600 U.S. healthcare workers died in the first year of the pandemic. The series features profiles of healthcare workers who have died as a result of Covid, while also examining the factors that led to these deaths.

Interestingly, the initiative is the most complete accounting of these deaths; “the federal government has not comprehensively tracked this data,” although calls are mounting for the Biden administration to set up a national tracking system.

One of those voices is David Blumenthal, former national coordinator for health information technology, who told KHN, “So many health care workers feel as though their devotion and sacrifice weren’t valued. We must combat the widespread fatigue and disappointment.”

In the meantime, projects like Lost on the Frontline are working to recognize the many lives lost by publishing profiles of fallen frontline workers. Taking it a step further, Hawaiian artist Taiji Terasaki has created mist portraits of healthcare workers that are exhibited in the Japanese American National Museum and can be viewed virtually.

According to an LA Times article, Terasaki is sending a scroll to each family participating in the project, in hopes that they will display them, and he hopes to create small community memorials throughout the country. “What’s really missing in our culture is the ritual and ceremony — to really get quiet and reflect and just experience the silence,” he said. “We need to find a space of reverence for the lost.”

I couldn’t agree more. As the weekend approaches, I encourage everyone to enjoy the time off (if you’re lucky enough to have it), but to also set aside a few moments to reflect on those who have sacrificed everything for our freedom and for our health.