During the past few months, the healthcare industry has experienced a number of firsts, like converting a cafeteria into a triage site, partnering with competitors, or embracing remote work. But for many leaders, the pandemic marked another milestone: it was the first time stakeholders from across the organization realized — and recognized — “the power of IT.”

“Everything they needed to do, from setting up tents to setting up telehealth, required IT to turn around and get projects done quickly,” said Chuck Podesta, interim CIO at UConn Health, in a recent panel discussion. “They saw what we could actually do, and how important we are to the organization.”

That was a positive. But among the many negatives is the fact that IT organizations suffered a major financial hit — one that could dramatically alter decision-making, both in the short term and long term. As a result, health IT leaders are feeling “paralyzed,” said Steven Shim (Executive Healthcare Strategist with HPE), who participated in the webinar along with Podesta and Neal Ganguly, VP of IT, Hackensack Meridian Health.

And for good reason.

“The future is murky,” he said. “This is really complicating what organizations have done with whatever allocation they had left in FY20, while also planning for FY21. Because in many ways, you’re trying to implement productive changes to maximize the funds that are available, yet you don’t want to lose those funds.”

At Hackensack Meridian Health, a 16-hospital system located in New Jersey, the immediate priorities were to transition 3,000 employees to remote work and ramp up virtual care, while also creating makeshift critical care units where providers could access patient records.

This, of course, didn’t come cheap. “There was tremendous cost incurred in that,” said Ganguly. “And we had to do it very rapidly in an environment where we were competing for resources with everybody else.”

And although cost wasn’t the main concern when cases were spiking, it still needed to be addressed. For many organizations — including state-owned UConn Health — that meant diverting capital and operating funds that had been allotted for IT initiatives, and putting it toward things like building a call center from scratch.

“We ended up with a pretty good-sized loss at the end of FY20, which we had balanced by using capital funds against our operating funds,” said Podesta, who started with the organization in late January. Because funds were diverted, projects that have been put on hold can’t simply be resumed. Some could be delayed indefinitely, he noted.

“Switching Our Sense of Urgency”

It’s a common sentiment, according to Shim, who has spent the majority of his career on the provider side, most recently serving as CTO of Greenville Health System. In fact, many health systems had to freeze their budgets. “The question now is, how do you accomplish these high priority projects and initiatives with the reduction in operational capital funds? It’s an absolute struggle going forward, and everyone is looking at different options.”

UConn Health, which ended FY20 (in June) with a loss and projects an even larger hit in the next year, is trying to limit the damage by assigning a steering committee and a developing a financial improvement planning process. Fortunately, Covid-19 numbers have steadily decreased in Connecticut, which has enabled the organization to resume procedures. But, as Podesta noted, “We still have this loss to deal with.” And so, “We’re switching from our sense of urgency around Covid and all the things we had to do there, to now all the things we have to do to get ourselves back to a balance from a budget perspective.”

The three main areas of focus, he noted, are revenue enhancements, limiting losses and implementing cost-savings initiatives. “We’re also preserving cash, which is really important right now. We have a few initiatives around that.” 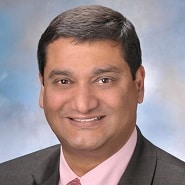 Hackensack Meridian is in a similar position, with Covid-19 numbers down and surgical procedures climbing. However, volume at EDs, which Ganguly called “a big pipeline into the hospitals,” is hovering around 50 percent. “We’re still seeing a revenue hit there,” he noted. “And so we’re evaluating what the organization should look like in a post-Covid world, and how we can focus more on remote care delivery.”

Getting over the hump

As leaders seek to determine which projects to focus on and which to defer, not surprisingly, it’s the secondary applications that will have to wait — not the major projects like ERP and EHR, noted Shim. It’s “particularly troublesome for growing organizations,” which are often looking to standardize on enterprise-wide deployments. But “you need funding to get over the hump. This is where a lot of organizations are stalled — getting access to resources and technology to get to the other side quickly so you can get those savings.”

For Hackensack Meridian, which had recently completed rolling out Epic and PeopleSoft in the hospitals, getting to optimization mode is a must, but it has to be approached the right way. “You have to have good discipline at the enterprise level,” Ganguly said. “We’re getting to the point where we can take advantage of some of the functionality that we’d like to drive forward using these new tools.” But, as with any opportunity, “It has to be packaged up and put in front of senior leadership so they can make some decisions.”

And that’s where leadership and solid governance come into play — in having the ability to prioritize based on the organization’s position today, and not where it was before Covid-19. “You have to look at things based on the new normal,” said Podesta. “It was great to see teams pull together and get things done rapidly. But you see warts that come out, and you want to attack those as well and look at opportunities to improve going forward.”

Of course, not every opportunity can get the green light, and CIOs must be willing to act as a “convener” when ideas come in from every angle during a crisis, according to Ganguly. “We have to look at ideas at an enterprise level and make sure that we are then prioritizing those in terms of what’s available from a resource standpoint. It’s something that we all struggle with as IT leaders.”

But it’s a struggle that Shim believes will be overcome. “I’m very optimistic about what the future holds for health IT, because we’re going to answer these challenges. We’re going to evolve, and that’s really going to enhance what we are able to do for our patients and our community as a result of this pandemic.”

To view the archive of this webinar – Grappling With a COVID-Impacted Budget: The Art of Leaning Up While Staying Strong (Sponsored by HPE) – please click here.