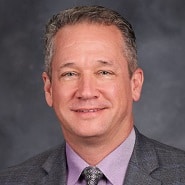 During a time as challenging as the one in which healthcare finds itself, agile isn’t a buzzword. It’s a means of survival. And as leaders face an onslaught of hurdles — some of which are constantly changing — the COVID-19 pandemic is “shining a light” on those who aren’t willing or able to respond, said James Wellman, CIO at Blanchard Valley Health System. “You can’t hide from this. If you’re not able to adapt, we’re going to see some fallout.”

Wellman is no stranger to adapting, have just joined the organization — and become its first administrative-level CIO — in July of last year. In a recent interview, he talked about the strategy he used to adjust to the role and gain the trust of his team; an approach that paid off when disaster struck a few weeks ago. He also discusses how they’re leveraging tools like Zoom and TEAMS to support the growing remote workforce, and most importantly, how they’re enabling providers to deliver care.

We’re doing our due diligence with cybersecurity. We’ve not let down our guard in that arena. In fact, we’re looking at expanding that.

When you’re able to share up ideas with some of these people, it’s a fantastic resource. You’re getting honest feedback, which is imperative because sometimes we don’t have the luxury of six months’ worth of analysis. We need to move quickly.

In any industry and any position, you have people who can hide. This is shining light on that. You can’t hide from this. And if you’re not able to adapt, I think we’re going to see some fallout.

I just get the heck out of the way and let them do what they need to do. They’re a smart group; they don’t need to ask me for permission. You know how to do it; go do it. Fortunately, that’s the culture and environment we have here.

Gamble:  You have some people working from home. What’s the new strategy there just as far as enabling this increased remote workforce?

Wellman:  We’re an Office 365 customer, so that helps, and we have protected VPN back into the organization for specific users. We have a OneDrive business version that allows some remote sharing of things we’re doing. We’ve used Microsoft Teams primarily for our internal video meetings.

As we’ve started to get our hands around some of these technologies, I’ve been encouraging my team to use video. I’ve told them, ‘we might be separated from each other for months, so use the video option to create a sense of normalcy. See your friends and your colleagues and interact with them.’

Teams has been solid there. Our medical staff uses it for their weekly briefings. We use it for multiple briefings each week at predetermined times. And when people ask questions, we know who’s on the call. It’s a good alternative should we experience any issues with Zoom. It is also HIPAA compliant. We also have a BAA, so if anything happens, we have that as a means to communicate.

Gamble:  It’s pretty amazing how Zoom’s usage has kicked up, but along with that we’ve seen some capacity issues.

Wellman:  It was interesting. When we spoke with our rep, he said, ‘I’m absolutely flooded. I’m working as hard as I can. We’re all working late around the clock.’ We were pursuing other options as well, but I had been interacting with a lot of people who were using it and said it was a great platform. Then when I investigated it, I saw that it could be a really good medical solution. And so we reached out, established the BAA, and had a rep come in. It was good timing; we felt it was important to have a definitive solution because, in the back of my mind, I’m worried about people taking advantage of this situation. We’re doing our due diligence with cybersecurity. We’ve not let down our guard in that arena. In fact, we’re looking at expanding that. We’re talking to a few different companies to see if they can pull us in and do some additional monitoring, because we’re a little more wide open than we had been previously. Although we are fairly protected, you can never have too much security.

Gamble:  Right. That’s another area where I would think being able to communicate with peers about their cybersecurity strategies is really helpful.

Wellman:  We’re asking each other, what are you seeing? What are you doing? I feel blessed in that I have a few friends who are very well respected in the industry — David Chou and Drex DeFord — who have started a cohort of CIOs and other leaders across the country. I can pick up the phone and call or text either one of them if I have a question. When you’re able to share up ideas with some of these people, it’s a fantastic resource. You’re getting honest feedback, which is imperative because sometimes we don’t have the luxury of six months’ worth of analysis. We need to move quickly. So having these types of resources is great.

Interestingly, my security measures kicked in there on my screen right now. Those are the little things you don’t think about. Normally, in the course of a business day, these timeouts are fine. But we discovered that since we’re online so much and doing so much virtual work, we have to go back and ease some of those screen and system lockouts. We’ve been giving presentations for the organization and we’re all sitting there listening, entranced with what’s happening, but because the mouse isn’t moving, the whole thing shuts down. We quickly realized we needed to fix that.

Gamble:  Those things you don’t normally think about can come up during these times.

Wellman:  Right. Normally we don’t have 40 people logged on. But now we’re practicing physical distancing — staying socially engaged and physically distant. Our CEO is doing fireside chats with the whole organization. We have a very large meeting room, but very few people are in it. We’re practicing what we preach. But what we’ve discovered is when you’re up there doing a presentation, nobody’s working on the computer. We had to fix that so it wouldn’t shut itself off in the middle of a presentation.

Gamble:  One thing we’re hearing about a lot is the need to be agile. It seems like that really comes into play right now; like you have to adopt that, even if it’s not your personality or leadership style.

Wellman:  That topic actually came up during a call with the group I mentioned. One of the participants made an observation. He said, ‘We’ve seen people who aren’t agile and it’s becoming abundantly clear from the way they’ve set up their organization, that those people can’t go out and make things happen. They’re being exposed.’ In any industry and any position, you have people who can hide. This is shining light on that. You can’t hide from this. And if you’re not able to adapt, I think we’re going to see some fallout. It’s sad, but it’s going to be a sign of the times. For those who build an agile team and empower their teams, it’s going to make a difference.

Gamble:  I think so too. On the flipside, if you have created an agile environment, that will show through, not only during this crisis, but in the aftermath as well.

Wellman:  We’re fortunate in that we have a brilliant infectious disease physician here. He’s come to me and we talk about what we can and can’t do. We’re looking at a lot of different things and it’s constantly moving. It’s constantly changing.

We just set up a brand-new dashboard for the entire organization. We’re tracking everything to do with COVID from the vents to beds to cleaning, and it’s on a singular dashboard. We’ll make it prettier eventually, but it’s really functional. That’s what matters now.

Gamble:  It seems like there really are so many different moving parts and different angles to this.

Wellman:  There are. Take ventilators, for example. People want to know, ‘Are the vents ready? Do we have vents?’ They’re trying to make clinical and technical decisions, and they need every bit of that data. I’m really proud of my team, so I just get the heck out of the way and let them do what they need to do. They’re a smart group; they don’t need to ask me for permission. You know how to do it; go do it. Fortunately, that’s the culture and environment we have here.

Gamble:  That’s another thing that will benefit a lot of organizations — if leaders are willing to step back and delegate so you can focus on other things.

Wellman:  Like you said, we’re trying to be agile. We’re trying to be nimble in how we do things, and this is where we have to be. Suddenly all of our Lean training and Baldrige process work is paying off. Those processes are getting a workout now. After the fact, we’ll go back and go through the data for a long time and look at what worked well and what didn’t. We’ll be doing a lot of Kota questions. This was the target environment and this was the reality. Did it match? What can we do better? And so we’ll adapt. We’ll adjust, and we’ll make it work. You have to have that attitude, or it will never work.

Gamble:  Very interesting. There are going to be a lot of lessons learned, and I’m really glad to see that leaders are willing to share best practices.

Wellman:  Yes. It’s a crazy time. The silver lining is that teams are coming together. People are working hard, and I’m really proud to be a part of this. It’s important to remind your team of their role. I said to my team, ‘The frontline clinical care workers are out there, but we help make all that a little bit easier, a little bit better, a little bit faster and more streamlined.’ I think that’s key.

Gamble:  Right. Well, I really appreciate you taking the time to share your journey, and I know our readers and listeners will too. Thank you so much!

Wellman:  No problem. I’m always open to talk if you need anything.