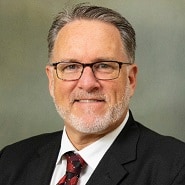 Danny Scott considers himself to be ‘a cheerleader by nature.’ Perhaps that’s why he wasn’t fazed by the idea of taking on an IS leadership role just weeks before a scheduled Epic go-live. And it wasn’t a simple conversation; Good Samaritan was migrating from an in-house EHR to a hosted Epic model. The staff, understandably, were “shell-shocked,” but Scott saw it as an opportunity to create a better environment.

Three years later, the IS department at Good Sam is barely recognizable. Not only are service and ticket management processes in place, but now, thanks to an enormous effort, IT is viewed as a “true partner.”

Recently, healthsystemCIO spoke with Scott how he was able to develop a strategic plan, the change in thinking that was sorely needed among IS staff, and the importance of communicating and assessing needs when creating a strategic plan. He also talks about why he’s “excited, but anxious” about the future of healthcare, the skills he believes are most valuable, and how his background has helped shape him as a leader.

The biggest thing I had to do during the first six months after go-live was manage the culture.

Some organizations treat the hub site like a vendor — you can’t do that. They’re not a vendor. They’re a partner that’s helping you get access to this great tool.

If people don’t understand why you’re doing something, they’ll never buy into it. Never. It’s all about education. Why are we doing this? What are the benefits? What’s the ultimate gain? Because at the end of the day, all people care about is, how is this going to affect me?

My job is be a translator. That’s something I think I bring to the table; being able to take very complex terms and processes and things that we’re doing, and make that understandable to someone who is not an IT person.

Over the next 10 years, I think we’re going to see many massive changes — not only in the technology of healthcare, but how healthcare functions as a whole. I think it’s going to look totally different.

Gamble:  Can you talk about the EHR environment and what’s being done in that area?

Scott:  My claim to fame is I started two weeks before they went live on Epic. They had already gone live in all of the provider offices, but the hospital was yet to be done. And so, when I walked in the door, a lot of people were shell-shocked. They had been working crazy hours.

We have a unique situation in which we use Epic but we don’t contract directly with them. We’re part of a connect model where it’s hosted by another organization and we use their instance of Epic. We do all the training. We work with our constituency every day to use the tool. My staff are experts in Epic. They’re certified in different areas, but again, we have that unique situation where the other organization — which is located about an hour south of us — is a hub, and we’re an affiliate. And actually, this type of arrangement is becoming more common; a lot of sites are doing it because it gives people the ability to use Epic, which is considered the industry leader in EHRs, but not have the financial burden.

Epic has a Community Connect advisory board, which I was elected to a few years ago. The reason I was so vocal about getting on that board is because I want to make sure that the affiliate voice is heard. There are about a dozen of us on that board. I think 10 of them are from hub sites, and two are from affiliates. We want to make sure the smaller guy in the room has a voice as well.

Gamble:  Right. So when you first started, the ball had already been rolling in terms of the EHR. Was your objective to bring some structure around it?

Scott:  Yes. When I came in, there was a little bit of contention between ourselves and the hub site. The biggest thing I had to do during the first six months after go-live was manage the culture. Up until that point, they had their own EHR system in house, which was eventually sunset.

But the way things worked, if you needed to get something done, you just called IS and said, ‘I need this changed or updated.’ Now, you couldn’t do that. You had to go to the hub site and say, ‘We need some changes made in the system.’ Whereas before, they had their own process for getting things done, now what could have been handled with a phone call had to go through reviews.

We didn’t have change management in place. And so the hub site would say, ‘We have to go through our change management committee and it has to be reviewed,’ and it caused a lot of frustration. Things weren’t happening very quickly. My role is to manage peoples’ expectations of the culture and explain to them how things work.

I’ve worked very hard to establish a quality relationship with our hub site because they’re truly a partner. Some organizations treat the hub site like a vendor — you can’t do that. They’re not a vendor. They’re a partner that’s helping you get access to this great tool.

Again, there was a little bit of contention there. I’ve actually presented this topic at Epic’s user meeting, talking about the struggles that we’ve had, and I’ve spoken with other affiliates about it. And so we had a heart-to-heart meeting about how we’re going to work together to be successful. We continue to have those discussions on a routine basis. As a result, I have a very good relationship with the CIO at our hub site. If I have any issues, I can call on her and say, ‘Hey, I need to talk about something.’ And it’s gone very well.

Gamble:  It’s interesting how you approach the partnership with the hub site. It’s different from the vendor relationship, but in both cases, you need to be on the same page. They’re just different in nature.

Scott:  Some people view it as, ‘I’m the customer and they’re the vendor. I’m going to beat them up.’ Well, that really doesn’t help you in the long run with trying to get things done. And so we’ve really tried to have a very positive relationship. We do a lot of offsite meetings and those types of things. It’s getting much better.

Gamble:  I would think that if people see that the affiliate and hub sites work together well, and there isn’t a contentious relationship, it’s a positive thing.

Scott:  That’s the whole role of a leader, right? To lead by example. If people see leaders fighting, screaming, and hollering at each other, what do you expect your staff to do? We’ve got to step up to the plate and show that we can work together and we can have a good relationship. That bleeds down into the staff; they’re working together just as hard and just as much. At the end of the day, it’s all about people working together and making things happen.

Gamble:  I want to talk a little more about change management. Anytime people are asked to do things differently, it is going to be difficult. What was your approach?

Scott:  I’ve been with change management in many different environments. One thing I’ve learned is this: if people don’t understand why you’re doing something, they’ll never buy into it. Never. It’s all about education. Why are we doing this? What are the benefits? What’s the ultimate gain? Because at the end of the day, all people care about is, how is this going to affect me? What’s in it for me? What am I going to get out of it? Is it going to make my life better? Is it going to make my life worse?

At the end of the day, that’s what they care about. They don’t care that you spent millions of dollars on a brand-new piece of software. They don’t care about that at all. What’s it going to mean to me? And everybody has different needs, so you have to manage every situation differently. For us, it was just about constant education; constantly talking to people.

In terms of our EHR, I have a phenomenal group of people to help support that internally. Probably the majority of the people I have are former nurses who come to work in IS. They have that background. They have that experience. They know what the nursing staff or providers are going through. They get it. They understand it. It’s so great to have that, because sometimes when you have a bunch of IT people walk into a room of clinicians, it’s like one side is speaking German and the other side is speaking French.

My job is be a translator. That’s something I think I bring to the table; being able to take very complex terms and processes and things that we’re doing, and make that understandable to someone who is not an IT person. We see it a lot where people say, ‘I’m a clinician. I don’t know anything IT.’ That’s fine. I get that. I don’t know anything about giving shots and healing people, but I’ll more than happy to talk through things.

I think that’s one of my biggest strengths, being able to break things down so people can understand it. When it comes to change, people absolutely hate it. They hate doing things differently, because everybody likes that comfort zone. Everybody likes to be comfortable. That’s normal. But for me, I’ve gone through so many change initiatives in my career. I could tell story after story of changes that didn’t affect me at all. To me, if there’s no change, that’s strange. It’s weird, especially in technology. Over the next 10 years, I think we’re going to see many massive changes — not only in the technology of healthcare, but how healthcare functions as a whole. I think it’s going to look totally different.

Gamble:  It’s funny, you talked earlier about going to the cloud. I’m sure it would’ve been so hard for people to picture that five or 10 years ago. These things have to be done gradually and on a scale.

Scott:  Right. And I’ve already started to put that bug in. About every six weeks, we meet with our senior leadership and we talk about everything that’s going on in IT. We’ve been talking about cloud computing. As you said, a few years ago people didn’t know as much about it. There have been a lot of concerns around security, especially with HIPAA, but I think the cloud space has matured to a level where people are more comfortable with it. I think technology is going to push us and I think the needs of consumers are going to push us to the cloud. It’s all about convenience, ease of use and interoperability. We want what we want, when we want it, and I think the cloud helps afford that.

Gamble:  Right. Now, you’ve been with the organization for three years, but you were named to the CIO position this past summer, correct?

Scott:  Yes. I started here as director of IS. There was no CIO, but I was the top IS person here. I officially got the CIO title a few months ago. The wording on my business card changed, but I’m still doing the exact same job.