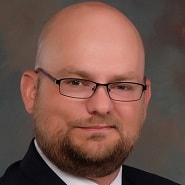 For many people, the key to a successful balance in life is in keeping work and family separate; ensuring the two worlds never collide. Some, however, have a completely different – and perhaps, more realistic – approach. Mathew Gaug, CIO at Memorial Hospital and Health Care Center, views his team as family, often applying the same conflict resolution and communication strategies as he does in his own home. “We’re together for the majority of the week, and so there are going to be struggles,” he said in a recent interview. “The ability to work through that, to talk through it, and to be open and honest with each other really helps drive that commitment and engagement.”

Gaug, who started with Memorial this past summer, talked about his initial priorities as CIO (which included selling the organization on an integrated EHR platform and choosing a vendor), how his team is involving multiple stakeholders in major decisions, and the keys to growing an IT department at an appropriate rate. He also discussed the importance of effective vendor management, his open-door leadership philosophy, and how his family is adjusting to life in Indiana.

It was bringing everybody in and saying, ‘let’s talk about how we use an integrated EHR and what we need to see to really make a decision.’ You can’t do that without bringing stakeholders in from the very beginning.

There are going to be struggles. There’s going to be conflict, but the ability to work through that — to talk through it and to be open and honest with each other — really helps drive that commitment.

IT is a very central part of that where they have a voice and they’re heard. The people in this organization understand the value of IT, and IT understands their value in treating the patient. And that dichotomy really helps when it comes to the mission.

Gamble:  It’s a big priority, probably more now than ever before, to ensure that technology isn’t creating an added burden. But I’m sure it’s a very tricky issue.

Gaug:  It absolutely is, especially from a technology standpoint. This isn’t just an IT issue. This is an organizational, cross-country issue where we’re dealing with multiple generations that want technology delivered in different ways. And so we have to find a unified way to have it different for all of them and yet the same, and that is a hard thing to do.

Gamble:  I would guess it really comes into play having user groups or things like the 90-day team and making sure the opportunities are there for participation.

Gaug:  Absolutely. And not just opening that up in general, but opening up in a way where everybody finds it meaningful and they want to contribute and have their voice heard. Sometimes getting the message out as to why people want and need to be involved can be harder than the implementation itself.

Gamble:  Sure. When you’re in the process of selecting a vendor, I would think it makes a difference to make sure there are opportunities to be involved and heard as early as possible. It’s probably not something you can really bake in halfway through the process.

Gaug:  Not at all. It drives the participation of the demo sessions and what the vendors are showing when you’re getting input from all the different stakeholders. We have, on average, about 27 separate sessions we’re looking at for each vendor, and those were driven by the input from the 90-day team. That way, it’s not just one person driving it by saying, we need to look at from a nurse’s perspective, or from a physician’s perspective, or from a coding perspective. It was bringing everybody in and saying, ‘let’s talk about how we use an integrated EHR and what we need to see as an organization to really make a decision on who we think does it best for us.’ You can’t do that without bringing stakeholders in from the very beginning.

Gamble:  Right. You mentioned earlier that you were with Lima Memorial prior to your current role. Was that your first CIO position?

Gamble:  Was there anything that kind of surprised you the role, or anything early on that really stands out?

Gaug:  Actually, I led both a development group and a technology group when I worked within the physician group of Akron General, which was part of the Cleveland Clinic. I created a team that incorporated all aspects of IT, and we implemented Epic. And so although it wasn’t considered a CIO role, especially within an organization the size of Cleveland Clinic, I learned a lot of things there that I took to Lima and brought here, which is the importance of working together as a team and seeing it not just from a technology point of view, but looking at it from the nurse’s point of view or the developer’s point of view. Building a team that is stronger as a whole, and not just in technology.

When I was with Lima, one of the first things that struck me was the strong need for vendor and contract management. That was one of the biggest things I tackled. In fact, the first month I was at Lima, we were going through an EHR upgrade. It was just a version upgrade, but there were a lot of struggles with the infrastructure, so it took some upgrades. Because of that, we were looking at our contracts. Without somebody engaged in those partnerships and what the contract says, it’s not going to work out. That was a lesson I didn’t forget. The ability to better partner with these vendors takes a certain skill set to actually negotiate and understand what they’re willing to do and what we’re willing to do, and what we can accept and what they can accept. It’s a give and take. And I think that understanding is critical to succeed in healthcare IT.

Gamble:  Right. Now, in terms of staff development, obviously there’s no one-size-fits-all. But what have you found to be some of the key aspects in enabling staff to grow?

Gaug:  Based on my own personal experience, I know that I learn better when it’s something I want to learn. And so when it comes to partnering with my team and engaging with them, I really try to understand what it is they want to do with their career, how they want to grow and whether or not they want to make a change in career ladders by gently pushing training or certification, or going back to school. I think job shadowing is key for anybody who doesn’t quite know what they want to do or where they want to grow, so they can see what’s out there.

I think cross-training is important as well, especially for smaller organizations that may not have the ability to staff for every single job function. By doing cross-training, if someone’s out or if there’s a major problem, no single person feels like they have the weight of the world on them. That may require some strategic training, but I believe allowing people to leave the organization to get trained and take time to better themselves only betters the team, and the organization. I’m a big proponent of making sure that’s a budgeted item and only gets cut or reduced if absolutely necessary. To me, training is critical to growing in healthcare IT.

Gamble:  Sure. When you have people who are engaged, they’re going to be more invested.

Gaug:  I always have an open-door policy. I like to make sure everybody understands that if they want to come in and talk, ask questions about how I would do something or what my thoughts are, or even just say good morning, I think that goes a long way in communicating that I may be an executive, but I’m part of the team.

I want to make sure that when there’s something going on, I’m the first one there and the last one to go. But at the same time, I don’t want to get in the way. I’m not going to micromanage. I’m not going to tell anybody how to do their job. We hire professionals because they know how to do their job. I’m just here to offer encouragement, and to take down any obstacles they may not be able to get over.

It’s the same way a family runs. When you think about it, we’re together for the majority of the work week, and so there are going to be struggles. There’s going to be conflict, but the ability to work through that — to talk through it and to be open and honest with each other — really helps drive that commitment and engagement to keep people happy much longer.

Gamble:  It struck me what you said earlier about how you and your family were really welcomed into the organization. I’m sure that made a huge difference. How is your family doing with the adjustment?

Gaug:  They’re loving it. The girls have adjusted to a new school, new friends, and new organizations and clubs. The same goes for my wife, moving into a new house and getting organized and settled — not just in a new town, but a new state. There’s a lot to do, but it’s good work. It makes a big difference when you can say, ‘I have good work to do’ versus ‘I have work to do.’ And I think we have good work to do.

Gamble:  Sure. I’m sure it’s so invigorating to be part of the organization and part of an industry that’s experiencing this type of growth.

Gaug:  It is. And the challenge behind maintaining the quality we have in the organization and the commitment that we have to our patients is good to have, so that as we challenge ourselves to build a new EHR or build the next whatever, we always keep that in the forefront. That way, we won’t drop back on any of the more important things when it comes to patient care and quality and service.

Gamble:  Right. One of the last things I want to touch on is in tying IT to the mission of the organization. Is that something that’s already part of the culture at Memorial?

Gaug:  At this organization, IT has been scattered out amongst various departments where the systems all report up to different VPs. It isn’t as integrated as it probably will be in the future. Even so, IT isn’t a department that sits in the basement and nobody knows what they do or nobody feels they’re important. We take rounding very seriously. We have leadership rounding where the executive teams will round to different areas; IT is a very central part of that where they have a voice and they’re heard. The people in this organization understand the value of IT, and IT understands their value in treating the patient. And that dichotomy really helps when it comes to the mission of this organization.

Gamble:  Very well said. Well, I think that about wraps it up. I want to thank you so much for your time. I’d really like to catch up in the next year or so to see how things are going.

Gaug:  Sure. That would be great.

Gamble:  All right, thanks and good luck with everything.

Gaug:  Thank you very much.