“The free press is a cornerstone of democracy.”

Eight words that say so much. I saw those words on a large sign on the front of the Newseum, an interactive museum that aims to “increase public understanding of the importance of a free press and the First Amendment.” It’s located, quite fittingly, in our nation’s capital, where my husband and I were enjoying a childfree weekend last fall.

Having known me for more than 13 years, Dan figured it was a place I would want to visit. He was, of course, correct. But it wasn’t merely a visit; for me, someone who has been immersed in journalism since my first piece was published in the Dodger (my high school newspaper), it was more like a pilgrimage. 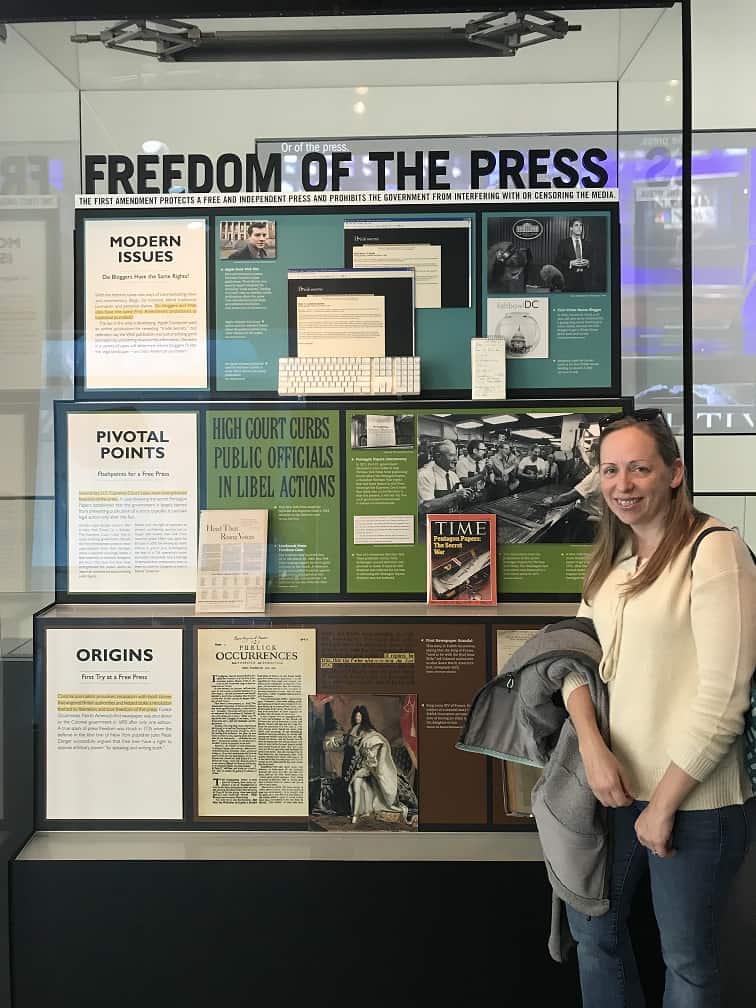 From the moment we walked in the front door, the Newseum made good on its promise to help us “experience the story of news, the role of a free press in major events in history, and how the core freedoms of the First Amendment apply to our lives.” Over the course of an afternoon, we viewed exhibits (including the 9/11 and Berlin Wall Galleries) and Pulitzer Prize Photographs, watched news reports from some of the most significant moments in our nation’s history, and took in the Journalist Memorial, a tribute to the hundreds of individuals who lost their lives covering dangerous assignments.

It was powerful, to say the least.

One thing that really stuck with me was a poll question posed to all visitors: “Which of the five freedoms has the most impact on our daily lives?”

Talk about a brain buster.

How on earth can anyone choose one among the five freedoms guaranteed by the First Amendment to the US Constitution? (If case you need a reminder, they are: Freedom of Religion, Freedom of Speech, Freedom of the Press, Freedom to Assemble Peaceably, and Freedom to Petition the Government). Perhaps it’s an easy answer, but they all affect us deeply, whether or not we realize it.

There are, however, times when one might weigh heavier on our minds than others. After visiting a place like the Newseum (or perhaps reading up on landmark Supreme Court cases during a long plane ride), one might be inclined to think about Freedom of the Press. Defined as “the right to report news or circulate opinion without censorship from the government,” it was considered “one of the great bulwarks of liberty,” by the Founding Fathers. It’s not hard to imagine why, as newspapers played “an important role in the events leading up to and during the American Revolution” by helping to spread information across the colonies.

Some 240 years later, it seems the free press has run into a bulwark. There’s a lot of mistrust of those who are counted on to deliver the news in an impartial manner — some of which, let’s face it, is deserved (I also like to read up on plagiarism cases). As a result, more and more organizations are creating strict media policies; some even refuse any interviews unless their public relations team is granted full control.

Healthcare, unfortunately, isn’t immune to this. I’ve run into more barriers in the past few years than ever before when it comes to securing — and publishing — interviews with CIOs and other leaders. And I know why: the trust has been lost. Too many factual errors, misquoted speakers, and unethical practices, and not enough accountability.

That trust has been lost, and there’s only way to restore it: by taking an oath. By putting our reputations as journalists on the line, and promising to do better.

I, Kate Gamble, promise to uphold this oath to the best of my ability.

Is that enough? Can one person’s promise actually make a difference? Maybe not, but it’s a start.