The car was packed, the gas tank was full, and the kids had their snacks and books. We were on our way to my parents’ house in Northern Virginia, where my little ones were staying while I traveled to nearby Washington, D.C. for the CHIME Advocacy Summit.

Before I could head for the Hill, however, there was the small matter of a webinar healthsystemCIO was hosting at noon. Under normal circumstances I wouldn’t be expected to call in on a travel day, but with Nancy (our director of sales and marketing) on vacation, I was asked to step up.

And so, knowing I’m not exactly the world’s best planner (cue the snickering from my husband, friends, siblings, coworkers, etc.), I decided it would wise to leave a buffer. I know this particular 3.5-hour drive like the back of my hand, but I also know that, as Murphy’s Law dictates, “Anything that can go wrong, will go wrong.”

But honestly, how much could possibly go wrong? It was a Wednesday morning, not a holiday weekend. And because I had taken the advice of a wise man — again, my husband — and had laid out everything the night before, right down to the shoes we’d be wearing, I figured we’d be fine.

What I didn’t count on was an entire lane being shut down on I-95. After (literally) cruising through New Jersey and Delaware, and becoming so confident I thought about stopping for lunch, Maryland slapped me with a reality check. I started to see brake lights, then construction signs, then the worst one of all: a long, red line on Waze indicating that we weren’t going anywhere for a while.

My travel companion Waze also affirmed that there were no ways around this particular mess. And so I watched helplessly as the ETA began to climb and climb. All I could think was, “I should’ve known better.”

This wasn’t Murphy’s Law; it was classic Chaos Theory.

For those who aren’t familiar with the concept (or didn’t watch Jurassic Park — where mathematician/rock star Dr. Ian Malcolm uttered the oft-quoted phrase, “Life… finds a way”), Chaos boils down to a simple point: “Even if you know all the rules, you can’t get rid of the chaos” (Forbes).

In other words, even if you’ve factored in traffic patterns, made sure your kids used the bathroom before leaving, and miraculously left the house on time, you can’t predict things that are “inherently unpredictable,” as one expert put it.

You can’t get rid of the chaos.

What you can do is react appropriately. When it became clear that we weren’t going to roll into Fairfax until after the start of the webinar, I called an audible. Taking advantage of the traffic that had come to a dead stop (#SMH, as the kids would say), I used my navigation app to locate a Starbucks along our route. As a remote worker, I’m extremely comfortable working in that particular environment, so I breathed a much-needed sigh of relief.

Of course, there were other factors at play. Would we be able to get a table at this particular Starbucks? Will there be an outlet? What if the kids lose their minds?

Those, however, were merely secondary problems. They were important, of course, but they didn’t warrant the same level of urgency as finding a place with a reliable Internet connection (and a restroom). 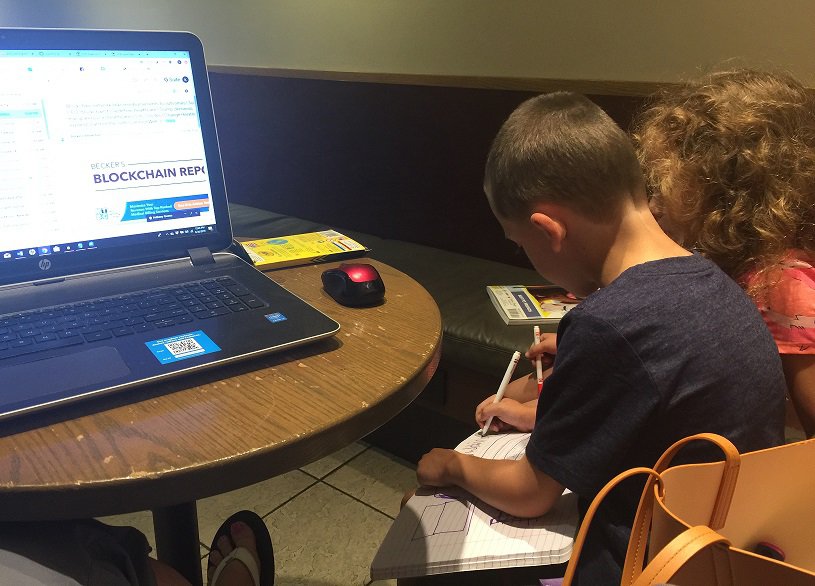 And that’s perhaps one of the most important lessons in this; once you’ve figured out how to solve the big problem, the others become far less intimidating. As it turned out, I was able to find a workspace near an outlet.

Another sigh of relief.

And so while I participated in the call and Tweeted away, my kids went to work on coloring and drawing (see left).

Thankfully, I had remembered to pack their art supplies. In fact, snacks and entertainment are probably the only things I never forget when traveling with my kids. Because no matter how much planning you do, or how well you’re able to anticipate and avoid hurdles, you simply can’t get rid of the chaos.