This isn’t going to end well.

As I watched the video that played before a panel discussion at last week’s New York State HIMSS spring meeting, I found myself getting nervous. So nervous, in fact, that I was sitting on the edge of my seat, chewing on my nails. Not exactly the professional persona I aim to project at these types of events.

But at that moment, all I could think about was the woman in the clip, and the expression on her face as she described the nightmare her family had endured. After being admitted to a hospital for stomach pains, her son underwent a series of tests administered by various care providers, who reached various conclusions as to what the right diagnosis – or treatment, for that matter – might be.

Despite the myriad questions she had about everything from the dosage of his medications to the unaddressed symptoms, there were no answers. There was no point person. There was no reason as to why a 15-year-old boy with a rapidly deteriorating condition went hours (more than nine, in fact) without being seen by an attending physician.

As I feared, the story ended badly – as badly as it possibly could have. Not only did a mother lose her son, but during the ordeal, she was made to feel powerless, angry, and very much alone. All she could say was, ‘how could this have happened?’

As the video ended and the lights went on, I looked around the auditorium at the New World Stages in NYC and noticed many other stunned expressions. The story was so different from what is usually shown at these types of events. It was raw, real, and heartbreaking.

I kept waiting for the part where technology swoops in and saves the day, but it never came.

What did come was a spirited, thought-provoking discussion on what it will take to improve the consumer experience far beyond the surface level, and the critical role HIEs play in aggregating data. The kind of discussion that can only happen if leaders are willing to open Pandora’s box and talk about “the other side” of technology, according to moderator Nick Christiano, who serves as CEO at Aris Radiology as well as being the chapter’s President-Elect.

“We have to tell the negative stories too,” he said. “We need to talk about why systems fail and what can be done.”

During the discussion, panelists Kimberly Krakowski (CNIO and VP of Sales at Cipher Health), Todd Rogow (CEO at Healthix), Yi-Ting Chaing (Associate IT Director, Population Health & Payer Systems at Mount Sinai Health System) and MaryAnn Connor (Director of Nursing Informatics, Memorial-Sloan Kettering Cancer Center) weighed in on the progress their organizations have made in terms of patient engagement, the uphill battles that remain, and the ultimate goal of enabling, supporting and empowering consumers through tools like artificial intelligence.

When you hear leaders of this caliber talk about how technology can help improve clinical outcomes and patient satisfaction, it’s hard not to be optimistic about the future.

But here’s the catch. 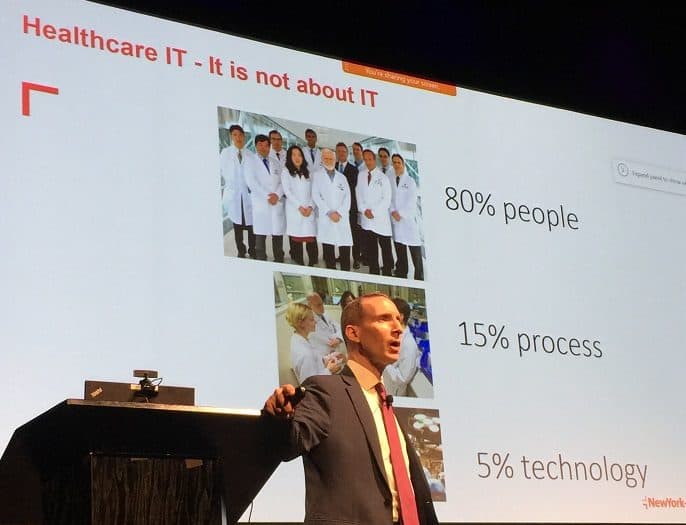 The more potential technology has to make an impact, the more individuals seem to rely on it to be the magic bullet. The more it purports to do, the higher the expectations – and subsequently, the risk of failure.

On the other hand, leaders that are willing to look at the whole picture; to assess readiness for change before it’s introduced, are the ones that will thrive. Those who realize that the technology piece is merely a fraction of the formula, rather than the majority of it (as NewYork-Presbyterian CIO Daniel Barchi, pictured left, pointed out in his excellent talk), are most likely to solve it.

Of course, the ending isn’t always going to be a happy one. Technology can – and will – fail. But if leaders are willing to pay attention to the people and process components, it doesn’t have to be the worst ending possible.