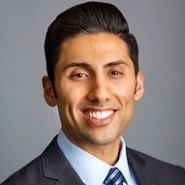 In a few weeks, Saad Chaudhry will embark on the opportunity of a lifetime when he becomes the first-ever enterprise CIO for Saudi German Hospitals Group, a multinational health system based in Dubai.

The opportunity, however, almost didn’t happen. Being a diligent associate CIO, Chaudhry was hesitant to click on an email about a CIO job in the United Arab Emirates; “I thought it was spam,” he said. In fact, it wasn’t until he received a phone call that he realized it was a legitimate offer to fulfill a dream to lead an organization on the other side of the world, applying the lessons he has learned during his career.

Recently, healthsystemCIO had a chance to speak with Chaudhry about what made him interested in pursuing the role at Saudi German, how he hopes to leverage his “human leadership” philosophy to drive change; why he isn’t worried about being able to adjust to a new culture; and what he’ll miss most about Anne Arundel.

They’ve never had an enterprise CIO before. They’ve run their facilities on a regional basis, on a local basis, and they believe now is the time to standardize their technology footprint.

I’m excited about the idea of working hand-in-hand with the operational side of healthcare; with the architects, the CMOs, and the CEOs of the hospitals to ingrain technology in every facet of the process.

I believe if you take care of the human side, everything else falls into place, including change management and technology implementation.

I saw the opportunity for myself and others like me to be able to do that — to share our best practices, everything we’ve gone through in the past decade here in the United States, and allow these other countries to learn from us, and perhaps leapfrog us.

They started looking for a CIO who had that background of thought. Not necessarily somebody who’s been a CIO across national boundaries or has experience in that specific part of the world, but somebody who thinks globally.

Gamble:  Thank you, Saad, for taking some time to speak with us.

Chaudhry:  Absolutely, I’m glad to talk with you.

Gamble:  You are currently associate CIO at Anne Arundel Health System, but you’re stepping down from that role to pursue something quite different. Why don’t you start by talking about the role that you’re taking on?

Chaudhry:  Sure. I’m currently the associate CIO here at Anne Arundel Health System, based out of Annapolis, Maryland. We are a regional health system. After about two years in this role, I’ve accepted a role with Saudi German Hospitals Group, an international organization that is based out of Dubai, in the United Arab Emirates. It’s a multinational health system; they have about 15 facilities, and about five additional facilities that are in a various state of development or construction. They’re spread out everywhere from Egypt to Morocco to the Saudi Peninsula and United Arab Emirates, of course, and they’re going into Southeast Asia now as well.

The interesting thing about this organization is while they’ve been around since the 1980s, they encompass the entire healthcare vertical — they also have a construction company that builds the hospitals, and a real estate company that deals with the geopolitical side of getting the land and working with the government to build these hospitals there. And another interesting piece is they’re are an academic medical center; they have their own medical universities that are staffed by Europeans and Americans; a world class faculty that churns out these clinicians. They’re essentially trying to take that entire vertical, own it, and hold themselves accountable to an international standard. It’s a very interesting paradigm, and they’ve never had an enterprise CIO before. They’ve run their facilities on a regional basis, on a local basis, and they believe now is the time to standardize their technology footprint; hence, the need for an enterprise CIO.

Gamble:  It sounds like a really interesting organization, and the fact that they have the real estate and construction entities certainly makes sense.

Chaudhry:  It does. From a technology perspective, this actually makes it better for a healthcare IT leader because most of the time, as enterprise CIO for an organization that spans multiple facilities, you’re getting a facility that has an infrastructure that’s been around for a while. Sometimes it’s new. Sometimes it’s not. You have physical facility limitations and you’re working around them or renovating them.

And in this specific case, because it’s part of the larger ecosystem of the same enterprise, I’m excited about the idea of working hand-in-hand with the operational side of healthcare; with the architects, the CMOs, and the CEOs of the hospitals to ingrain technology in every facet of the process.

Gamble:  It’s pretty obvious as to the appeal of an opportunity like this, but can you talk us through the decision process and what led you to it?

Chaudhry:  Sure. But before I can get into why I was interested and why they were interested in me, I think it’s valid to talk about my own background and why it led me to even being considered for the role. I was born in Pakistan, in Southeast Asia. My family is originally from the Indian subcontinent. I lived in Austria until I was about five or six, and eventually moved to the United States, where I do actually have family in Pennsylvania and Pittsburgh. So if you count years, I’ve spent the majority of my life in the United States.

I am a US citizen; I consider myself American. This is home for me, but I’ve lived as a result of my upbringing on three continents. I’ve been exposed to many cultures. And as such, I’ve had this idea in the back of my head, having seen these cultures and coming from a family of physicians who have practiced around the world, that medicine is not practiced equally everywhere, and healthcare, neither from a corporate level or a technology perspective, is not handled the same way.

When we talk about global healthcare, we talk often how the US healthcare system, from a policy and operational standpoint, is not as all-encompassing as in some other countries that provide socialized medicine. Where we do lead is in technology. When Meaningful Use was put into place, it really spurred the adoption of some of the information systems utilized in a modern-day hospital. As a result, regardless of where US facilities and health systems land in terms of optimization, they all have some IS footprint footprint. You can’t say that about every health systems across the world. And so, while we’re trying to work toward covering more Americans from a policy side, we’re leaps and bounds ahead of everyone else from a technology perspective.

In having been exposed to some of these medical practices and health systems around the world, I’ve often thought it would be great if at some point in time, when other countries are ready to start taking those leaps forward, what a great idea it would be for some of the American healthcare leadership to be able to share their best practices; to be able to allow our neighbors and friends across the pond to leapfrog us based on the pain points we had when we were going through this process. Because at the end of the day, we’re all human beings co-existing on a single planet — why not help each other out?

Whenever I thought of my future from a healthcare leadership perspective, that’s what I would imagine: taking everything I’m learning, everything I’m doing with my team, and my approach to leadership and being able to leverage it. I always focus on the human side of leadership — which is an odd thing to say because I’m a technology leader, but I believe if you take care of the human side, everything else falls into place, including change management and technology implementation.

And so, as I’ve developed in my career, I’ve always thought in the back of my head that someday we could apply those the best practices we have here across the world, and the rest of the world will be better for it. And with this offer, I saw the opportunity for myself and others like me to be able to do that — to share our best practices, everything we’ve gone through in the past decade here in the United States, and allow these other countries to learn from us, and perhaps leapfrog us to usher in the age of the next generation of both health systems and CIOs.

Gamble:  It’s really interesting if you think about what type of impact it could have had if, while the US was in the early stages of Meaningful Use, there were other countries that could talk about those pain points.

Gamble:  So moving abroad is something you’ve been interested in for a while?

Chaudhry:  It’s something I’ve always toyed with. I never had an actual plan, or an organization I was targeting in any way or speaking with. It just so happened that the stars aligned in this specific case. This organization, as I mentioned, had been doing an introspection on themselves as a corporate entity for the past couple of years. They’re beginning to think about a shared services model, and using their size to provide better and expanded care at their facilities across continents. And part of that introspection from their perspective was, ‘we need to do that same from a technology perspective.’

They wanted somebody who had the ability to operate at a global thought level, and they wanted the right background. They wanted the right education, the right successes in that person’s past, and the right activity in their current role. And while they were doing this search, I was fortunate enough that they came across one of my friends, who I’ve met at a couple of my previous workplaces and is now an enterprise CIO at another multinational organization based out of Dubai. They asked her if she could recommend somebody who would be a good fit, and she gave them my name. Thereon, we started conversations. One thing continued to lead to another, and about four or five months of processing, conversations, and interviews, I decided to accept the role.

Gamble:  What was your reaction to hearing that you had been recommended for this role?

Chaudhry:  The irony of this is, we talk about cybersecurity a lot these days. And chief among that, we talk about phishing. So as an executive leader in the healthcare IT space, I’ve become a huge skeptic whenever I see something — especially in an email format — that seems out of this world and too good to be true. Initially, I initially thought it was spam. I didn’t believe this to be a real piece of communication, and so I didn’t initially jump on it right away. It was only after a phone call from my contact in Dubai who had recommended me, that I thought, ‘This is real.’ And so, my initial reaction was that it was phishing, the second was disbelief, and from there on, it got real, and I was extremely excited. I am still.

Gamble:  Who was the first person that recommended you?

Chaudhry:  Her name is Donna Lunn. She’s the CIO for the Middle East Division of Mediclinic International, a rather large health system that spans multiple continents. It’s a publicly traded organization in many of the continents. Donna and I actually have many parallels in our career. We were both with McKesson at one point in time, and we were both at University of Pittsburgh Medical Center. We share many mutual friends and contacts, and ironically enough, we both call Pittsburgh our actual home.