This past Monday, as you know, was President’s Day. And although it is a federal holiday (meaning the stock markets are closed and mail isn’t delivered), it isn’t recognized everywhere. In fact, 11 states don’t observe it at all, and a number of schools and offices remained open. And there’s the retail sector, which has turned the holiday into another version of Black Friday.

And I get it. If businesses want to remain competitive, capitalizing on three-day weekends is a must.

What bothers me is that the day – which is officially titled ‘Washington’s Birthday’ – seems to have lost its meaning. For starters, George Washington was born on February 22, 1732. But the holiday was moved to a Monday as part of the Uniform Monday Holiday Act of 1971, which was created to give federal employees more three-day weekends.

Again, I understand that. What I’m wondering is, when did become about 45 individuals, rather than one? Why doesn’t one of the most pivotal figures in American history have his own day? Over the past few days, I’ve been happy to see I’m not the only one who feels this way.

On Monday, my brother shared this Tweet from Michael Beschloss, author of Presidents of War:

Painful to note how birthdays of Abraham Lincoln and George Washington have been eclipsed by generic Presidents’ Day celebrating every President up to and including whoever the incumbent is.

It garnered 6.6K likes, and was retweeted more than 1,000 times. And although for some, it turned into a statement about our current political climate, for me, it was about giving POTUS1 his due. [As a side note, I’m 100 percent on board with Abraham Lincoln getting his own holiday as well, but this particular post is about GW.]

For some background, I’ve had a fascination with George Washington for years. Having grown up near Morristown, N.J. (home of two winter encampments during the Revolutionary War), in a family of history buffs, I endured numerous trips to watch battle reenactments and learn how food was cooked with no appliances. And although I sometimes protested – I was, after all, a kid who would rather be playing – I secretly enjoyed hearing the stories of courage and resilience. I remember being in awe of our ancestors, who persisted despite bitter cold weather and a lack of supplies.

Years later, I can still rattle off key facts. 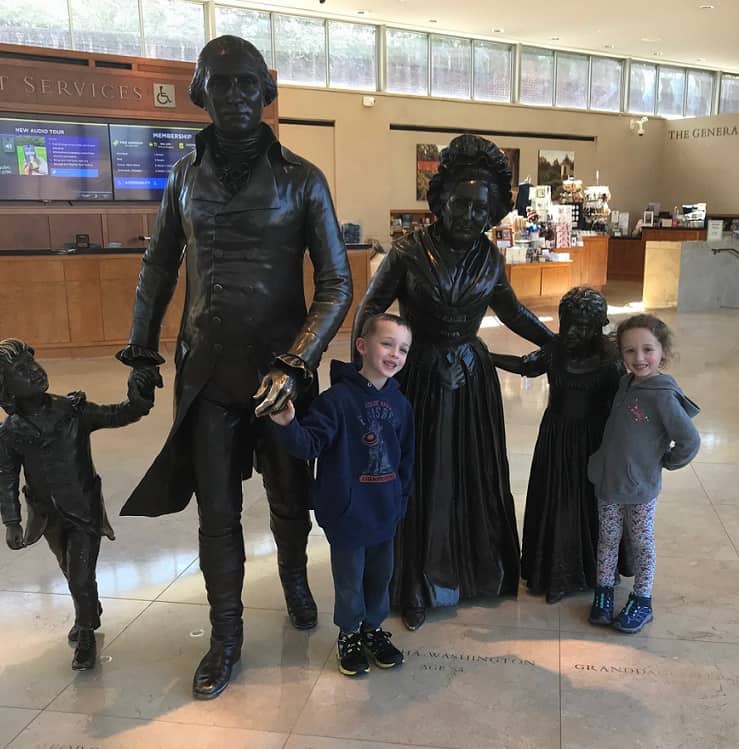 But these are just facts. Truthfully, I couldn’t quite grasp what I found to be so compelling about Washington – until last week, when my mom and I took my kids to Mount Vernon. As we toured his home, watched films, read snippets of history, and heard stories from Washington’s life, I realized that what made him great was his vision of what this nation could be, and his willingness to fight for it (literally).

He had his share of shortcomings, but never let them stand in the way. For example, Washington’s family couldn’t afford to send him to England for school, so he educated himself by pouring over books. And contrary to popular belief, he wasn’t a brilliant – or even experienced – military tactician, but he had strong instincts, and he trusted them.

And, perhaps more importantly, his soldiers trusted and believed in him. As historian John F. Gilligan wrote, “Washington was able to solidify and inspirit his army. He lived with them with fortitude and conviction on the campground and fought with them on the battleground. He risked his life for them and they for him … His ‘Great American Cause’ was to create a united nation of free and independent people. He touched the hearts of all and never resorted to inflaming their passions. It’s what inspired the men he led and persuaded Congress to fulfill its responsibilities.”

In other words, George Washington believed in us before there was an ‘us.’

And even after the ultimate goal of independence was achieved, he never veered off course. Rather than remaining in office after his second term, the hugely popular president chose to step away from power and “have faith in us as a country and faith in us as a people,” said Brad Meltzer, author of the new book, ‘The First Conspiracy’ (which I plan to read). “I don’t know if you can find anyone else like that. That’s where I feel like all of history changed.”