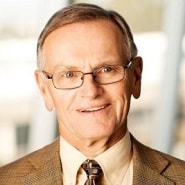 Prior to the recent CHIME18 Fall Forum, only four individuals had ever received the CHIME Legacy Award. And so it was only fitting that the honor go to Bill Spooner, who has remained one of the most influential leaders in healthcare space despite retiring as CIO at Sharp HealthCare four years ago.

Spooner, a longtime CHIME member and former Board Chair, continues to contribute to the industry on several fronts, serving as chair of the Most Wired Governing Board, and holding key roles on the CHIME Opioid Task Force and the Public Policy Steering Committee (PSC).

“Bill has done literally everything CHIME has asked of him, and more,” said Russell Branzell, CHIME president and CEO. “He brings so much knowledge, insight and good spirit to everything he does. We are privileged to have him in the CHIME family.”

Spooner has more than 40 years of healthcare experience, including 18 years at Sharp, where he led an aggressive clinical transformation, and earned the 2007 Malcolm Baldrige National Quality Award. He retired in 2014 and currently is a founding advisor at Next Wave Advisors, a Huntzinger Company.

“He is truly committed to everything he does. He was critical to the success of CHIME’s Most Wired program this year, and his participation on the PSC and the CHIME Opioid Task Force has been invaluable,” said Cletis Earle, chair of the CHIME Board of Trustees and CIO at Kaleida Health.

Spooner has received numerous awards from CHIME, including the 2009 John E. Gall Jr. CIO of the Year award and CHIME’s inaugural Federal Public Policy Award for CIO Leadership. He was the first person to be featured in healthsystemCIO.com’s Health IT Influencers podcast series.

In addition, a number of other individuals and organizations were recognized by CHIME for their achievements in the industry, including the following: