Like many CIOs, I’m keeping an eye on what’s really happening with blockchain. As of August 2018, I have yet to see any companies that have adopted it as their primary ledger technology.

Most blockchain solutions are still in the exploratory stages. This jibes with a new survey of business and tech execs by PricewaterhouseCoopers, which found that the majority of companies are in the research, development, or pilot phase when it comes to blockchain. And 14 percent of those surveyed have yet to get started.

I’m also reminded of a Gartner report from earlier this year, which found that a staggering 77 percent of CIOs said they had no interest in blockchain — or its potential to help their future business plans. Despite the seemingly low uptick, however, I am still a huge believer. And yet, I also have big questions about what it will take to deliver on that promise in healthcare.

The healthcare industry could benefit from using blockchain to more easily share information. It all sounds well and good, but there are adoption challenges for an industry that is risk-averse. Below are the areas that we must overcome.

Healthcare providers and insurance payers are all over the board in terms of how different entities handle records. Without a streamlined system, it would be extraordinarily difficult to bring these entities together to adopt blockchain. But it’s not technology that’s the biggest barrier; it’s a lack of trust. We are asking distributed organizations to trust each other.

A classic example of this is how insurance payers and hospitals actively try to not share data. It’s a competitive advantage for hospitals to keep cost data to themselves. If they are forced to share with insurance companies, they might get different rates for different patients. It’s difficult to share data in an environment in which these entities view the data as intellectual property.

Because healthcare is a distributed system, there isn’t necessarily one entity that could adopt blockchain, then require its use by others. There isn’t a governing body. The healthcare industry as a whole will need a mandate from a regulatory standpoint to enforce patient sharing. Once that is in place, the same regulatory requirements can be used as the foundation for building out a blockchain solution.

As you can see, these concerns from a healthcare perspective are consistent with PwC’s survey findings as to what’s getting in the way of blockchain adoption. 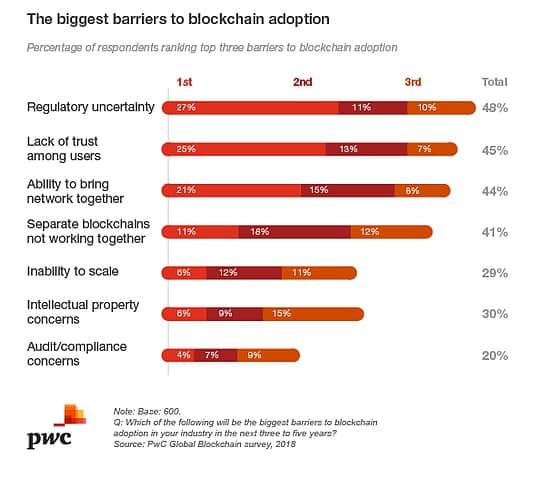 Blockchain’s Potential in IT Security

One area in particular where I’d like to see blockchain deployed is IT security — one of the hottest items on every board and CEO’s agenda.

Blockchain won’t replace current technology, but it will be an additional security measure. In order to add onto the ledger, you’ll need keys to authenticate and decrypt so that it adds a whole new layer of security to the transaction. It can create trust among parties. For example, right now if we needed updated information for a patient with another organization (i.e., a doctor or insurance company), we would need to send all of their information, with that one transaction holding all the details. From a security standpoint, if that transaction is hacked, the hacker now has access to everything. With blockchain, this information is broken into pieces. Therefore, if it’s hacked, the hacker wouldn’t have the right key to authenticate, nor would they have all the information. And what information they do get will be less relevant.

I’m also encouraged by all the investment activity in this area. Look at ID2020, a public-private partnership dedicated to solving the challenges of identity theft through technology like blockchain. Once the large tech companies start offering the software and/or services, the rest of us can start to take advantage of it.

How Bright is Blockchain’s Future?

So, what’s the real story? Should we believe reports that predict blockchain will grow exponentially over the next decade? Or listen to the skeptics who think blockchain is just another overhyped trend? Only time will tell. Either way, it’s definitely one area you don’t want to ignore as a CIO.

This piece was originally posted by David Chou, Chief Information and Digital Officer at Children’s Mercy Hospital, on his blog page. To follow him on Twitter, click here.