I recently had a conversation with a CIO to discuss the fact that he has recently installed a third population health tool in an attempt to cover all his bases. He explained, “If you would have asked me four or five years ago, I would have been 100 percent convinced that everything was going to the big EMR vendors, and it’s all going to consolidate. But we’re not there yet.”

This exchange had me wondering: what exactly will the future of healthcare look like? As I worked my way through this question, I quickly found myself digging into KLAS data trying to find the providers’ view on what the future may hold. I found a few things that, given the challenges we face in healthcare IT today, give me hope.

While we still have a long road ahead before we reach “deep interoperability” — which KLAS defines as data exchange that actually impacts patient care — we do have small reasons to celebrate. The number of providers who reported deep interoperability between the same EHR vendor in our 2017 report only increased from 24 to 26 percent; however, the number of providers who reported deep exchange with different EHR vendors more than doubled (from 6 to 14 percent).

Those are small numbers for sure, but the growth is reassuring. As Carequality and CommonWell Health Alliance continue to grow, and local HIEs continue to build out their networks, I hope we’ll see an exponential growth of effective data exchange. Above all else, the “utopian future” of healthcare IT depends on breaking data out of silos.

Recently, I had a conversation with a provider about her facility’s population health efforts, where they’ve made great strides in targeted areas. She explained that they’ve been able to reduce ED readmission rates by using their PHM system to identify food-insecure patients. A provider reached out to the local food bank to partner with them. The end result? Food-insecure patients (often just coming into the ED for a free meal) are quickly identified and sent home with 40 lb. of food. They are also placed on the food bank’s watch list for follow-up care.

As healthcare dives deeper into big data and the incorporation of social determinants of health (SDoH) for patient care, I hope to see a future filled with many more examples of these creative solutions to maximizing the health of populations.

The Harvard Business Review recently wrote about how Amazon might impact healthcare. The piece that truly piqued my imagination was the mention of passive data capture. Can you imagine what the Amazon Go setup could do to physicians suffering from EHR/data use? Several physicians already have, and tools are starting to roll out: 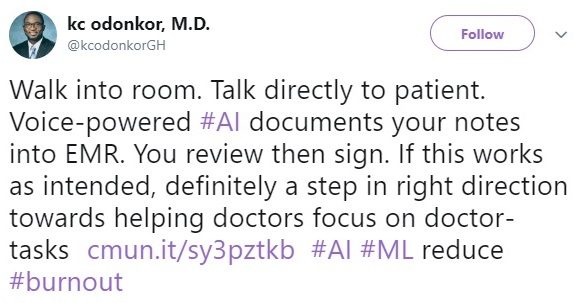 I can think of more than a few physicians who would leap at the chance to revolutionize their patient care away from the computer. While some future advancements of healthcare have technological hurdles to overcome, I get the sense that it’s not technology, but rather, regulation that most hinders this form of health IT innovation.

While the data is early, I am enthusiastic about the possibilities as vendors begin to use applied genomics for creating personalized patient care.

Any time we try to predict the future, we can wind up with some pretty harebrained ideas; like the 1950’s prediction that we’d all have in-home Smell-O-Vision at this point. Thankfully, I think the path leading healthcare forward is a little more illuminated and only occasionally obscured by the smoke and mirrors of market hype. And for my part, I’m excited to see where the future takes us.