I know, “the freedom of failure” sounds pretty counter-intuitive. Freedom from failure would be an easier topic to discuss. Unfortunately for us, failure is the all-too-common result of trying to move forward. I don’t think I need to reiterate the numerous ways in which failure has impacted healthcare IT. As recently as this month, a Stanford Medicine poll showed that 521 surveyed physicians “aren’t 100 percent pleased with all aspects of their electronic health record systems.”

Or in other words, “the EMR has failed us, yet again.” It sounds like the very definition of breaking news to me. We’re all shocked, I’m sure.

If you want some news that might actually raise an eyebrow, you might want to look into the Arch Collaborative. Providers worldwide have begun working together to benchmark end-user satisfaction with their EMR. The shocking part? Some organizations have clinicians who enjoy their use of the EMR. 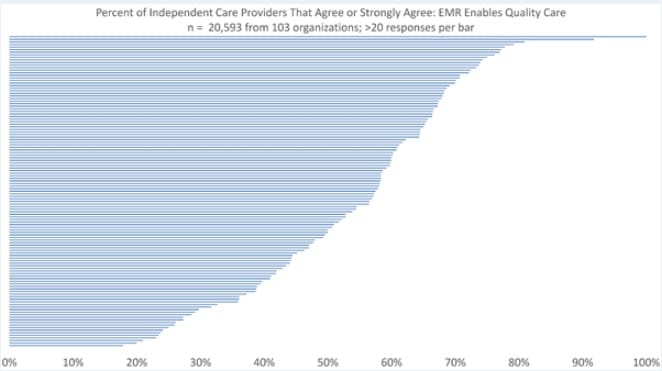 The chart above comes from 103 participating organizations in the Arch Collaborative. These include providers from acute, ambulatory, academic, and international backgrounds. When I first saw this breakout, I naturally focused in on the top facilities. I couldn’t believe we had found organizations with over 80 percent of their end users agreeing that the EMR enables instead of inhibiting quality care!

Moving forward, much of the Arch Collaborative’s purpose will focus on uncovering the best practices from successful organizations and figuring out how to raise the tide and lift all the ships in the harbor, so to speak. However, another poignant piece of this discussion centers around failure.

What are the organizations at the top of that chart doing differently from the ones on the bottom? It’s not as simple as which EMR they’re using. The second most satisfied and 15th least satisfied organizations on the above chart are using the same EMR. Additionally, it doesn’t seem to have much to do with money, as we’ve found that operating budgets with more than 4 percent focused on IT see only marginal improvement in user experience.

Instead, as we’ve uncovered more and more best practices, the three big predictors of EMR success are:

If organizations can learn best practices from the high-performance providers in these areas, we’ll be able to make an impact on clinicians in a big way! So one question may be, “What are they doing right?”

More importantly, can we learn from the mistakes and experiences of lower-performing organizations? After all, success isn’t the absence of failure but the ability to move on from each failure without loss of hope. In fact, if we can overcome the natural human desire to hide from our shortcomings, we may actually learn something.

Recently, I had the chance to hear from Dr. Michele Lauria, the CMIO of EMHS. She spoke as the opening keynote for the Arch Collaborative Summit, and she spoke about her failures. As she talked about the initiatives that her organization had tried to implement around the EHR and the roadblocks they had faced, I marveled at her bravery.

To stand in front of her peers and openly discuss one’s missteps takes courage. But as I think Dr. Lauria understood, it served a greater good. By opening up the Summit with a focus on humility and openness to making change, Dr. Lauria did everyone in attendance a huge favor.

Maybe I’m waxing hyperbolic, but as the event progressed, I saw peers coming together without the usual guarded professionalism that clouds over this kind of event. Instead, I saw providers looking at their own programs and honestly saying, “Yeah, that didn’t work. What else have you got?”

Seeing failures as chances to learn and change instead of roadblocks brings a freedom that can’t be overstated. Innovation, collaboration, and improvement only come at the moment we stand up, dust ourselves off, and try again.

Thankfully, as more and more organizations see the value in measuring, collaborating, and improving their end users’ EMR experience, the answer to “What else have you got?” increasingly becomes: “Quite a lot, actually. Let me send you some details.”