It happened as soon as I stepped off the bus. Before I even made my way out of the Port Authority and toward New World Stages, the venue that hosted last week’s New York State Chapter HIMSS Convention, I had morphed into a different person.

During my trek to the Big Apple, I was still my mellow self — a person who enjoys sitting barefoot in the grass and tries to take time to smell the flowers (literally). I enjoyed the view out my window, taking in the sights from the Raritan River to Newark. But when we arrived, I reverted back to my former commuter self: walking at a brisk place, avoiding eye contact with anyone, and focusing only on my destination. I don’t think I cracked a smile for 10 blocks.

I was a true New Yorker. And if you’ve ever been to the city that never sleeps, you know that New Yorkers are perpetually in a hurry (which is unfortunate, since it’s difficult to go anywhere quickly in a city with 9 million people), and everything seems urgent.

New York is a tough, no-nonsense city. And so it was only fitting that the discussions at the miniHIMSS event focused not on what organizations have done it the past, but what they’re planning for the future — how the best and brightest from some of the best health systems in NY (and a few other states) are leveraging technology to improve care.

And in healthcare, the answers can’t come soon enough.

“When I think about what it’s like, from a personal perspective, to deal with our healthcare system, it’s hard,” said MaryAnn Connor, Director of Nursing Informatics at Memorial Sloan Kettering Cancer Center. “It’s really hard, and we’ve got to find a way to make it easier. That’s the promise of technology we haven’t managed to capture yet.”

Connor participated in a panel discussion focusing on the real-world applicability of technologies like artificial intelligence (AI) and telehealth. It was one of four discussions (or “Acts”) in which a group of experts shared their experiences, debated points, and fielded audience questions. As a result, the entire day had the flow of an ongoing dialogue, rather than a series of individual presentations.

And although a number of different topics were examined, the common thread was in identifying key areas of opportunity. Some of the points that stood out to me are as follows: 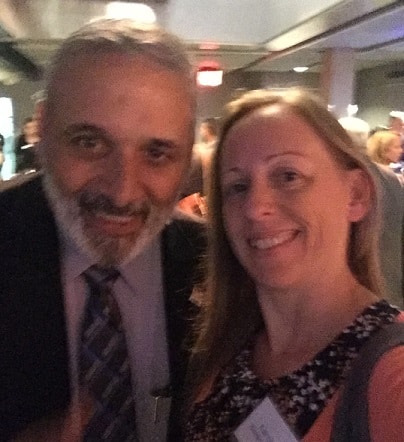 Stopping to say hello to the master of ceremonies, Tony Ferrante.

And of course, other obstacles exist.

“Every day we’re more challenged with what we have, and what we need to provide,” remarked Rosemary Ventura, CNIO at NewYork-Presbyterian. “The reality is that 80 percent of our focus is on keeping the lights on, and 20 percent is on thinking about the future.”

It’s a reality that needs to be flipped on its axis, said Taveras. One way to do that? By negotiating an agreement to ensure that the savings realized from IT initiatives are reinvested into IT — a deal he struck in a past role. “You can’t just ask for money. You have to create the opportunity.”

It’s precisely what these leaders are doing. And like true New Yorkers, they won’t stop (or even slow down) until they’ve achieved that goal.