There is a storm coming.

We’ve been tracking it for the last five years, in fact. It continues to build in intensity and we are just now starting to be impacted by its outer bands. As we look around, the winds are starting to pick up and rain is beginning to fall. We are seeing things that we haven’t seen before and are just trying to make sense of it all.

The weather is powerful and unpredictable. And it’s hard to tell how the impending “storm” will affect us as it approaches.

I wanted to share a graphic from this recent CHIME Fall Forum. Jonathan Manis, CIO of Sutter Health, used this slide to explain digital transformation and its impact on industries and the role of the Healthcare CIO. 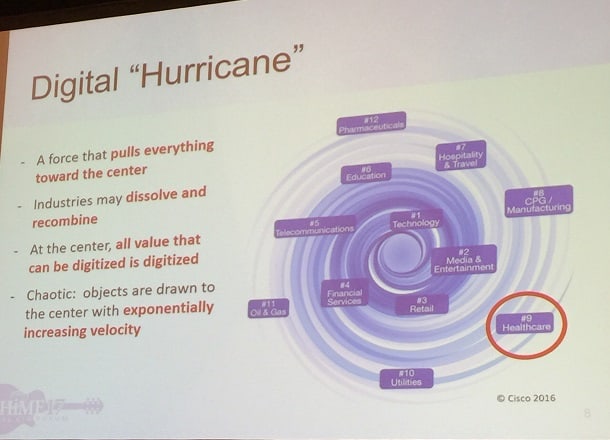 The concept is simple, really.

Every industry is being pulled toward the center of the digital storm. Healthcare is in the outer ring, but other industries give us an idea of what transformation looks like. We can use their experiences to predict the path that our own transformation will take.

Whole industries may dissolve and recombine in some way. You can probably envision a time in the future when car manufacturers will no longer be just about making cars, but be more about transportation as a whole. This might explain GM’s investment in Lyft.

When we get close enough to the center of the storm, change comes exponentially faster.

The Outer Band of the Storm

Are we in healthcare really at the outer band, or closer to the center?

Manis went on to say, “The good news is that the road to digital transformation is a 10-year journey; the bad news for healthcare is that we are already 7 years in.”

Let’s take a look at the headlines and determine what they indicate.

The traditional course has businesses staying in their designated swim lanes. These headlines would indicate that the boundaries of healthcare are starting to blur, though. Healthcare providers might be lulled into thinking that this won’t have an impact on the traditional business model of a hospital. They would be wrong.

The mistake is in thinking that digital players even want that business in its current form. They don’t want expensive, highly-regulated buildings; they want the digital dollar. They will operate around the edges where they can, leaving healthcare with a high-risk/low-margin business.

I’m going to suggest that we in healthcare have already moved past the outer band, and are already entering a time of increased velocity and change. We’re not at the center yet, but we’re close enough to begin seeing the impact on the hospital’s P&L.

Seeking Shelter from the Storm

During a storm, you want to be in a strong shelter. That shelter for healthcare companies is a strong balance sheet, both financially and technologically, and a culture that can adapt quickly to change. Let’s unpack this a little.

On a technology balance sheet, liabilities are known as tech debt. This is a common term in technology circles; it indicates the additional work created as a result of implementing less-than-optimized solutions, or the trade-offs that a company makes in an attempt to move rapidly.

Common tech debt in healthcare, after EHR implementations, can be broken down into three categories. The first includes bad data due to poor training, processes, and governance. Next is inter-operability of data due to poor assumptions in architecture. Lastly, we have vendor lock-in and extensibility challenges due to poorly-written contracts and potentially-misplaced trust.

The culture is, however, the greatest indicator of an organization’s ability to weather the storm. The leader’s role is to have the organization pointed in the right direction, focused on the things that are going to matter when the storm hits.

What does the future hold?

More mergers and acquisitions. More services aimed at delivering a better quality of life to chronic patients, which keeps them out of the hospital. New business models which leap across geographic boundaries that once protected hospitals from outside competition.

Partnerships that no one considered until they were announced, such as a health system and a hotel chain, or a tech company and pharma. New entrants into the healthcare space which sell health rather than sick care, monetizing what we really want: healthy lives.

This is tomorrow’s weather forecast in healthcare. Luckily, there’s still time and plenty of options for those who are prepared.