“What are you drawing, buddy?” I asked my son Austin, who turns 5 tomorrow.

“Wow, it looks really cool,” I said, noting the steps he had carefully outlined. I quickly realized there was an opportunity here, and I took a page from the book of my mom, who always seemed to know how to foster creativity with her children (and now, her grandchildren).

His face lit up as we talked about how to proceed with this rather ambitious plan. “How about we pick up some of those used boxes the next time we go to Costco?” I suggested, which was met with an enthusiastic nod.

That Saturday, my husband Dan and Austin loaded up the trunk with cardboard boxes, and went to work. Dan grabbed the duct tape and scissors, and Austin donned his safety googles, for good measure. 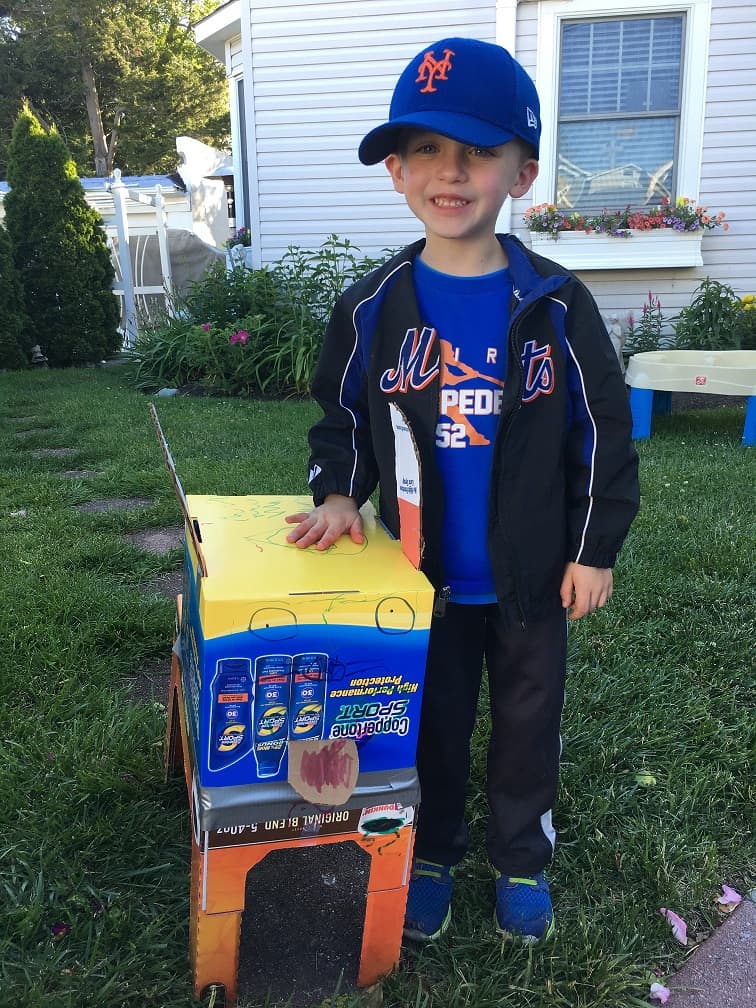 A little while later, Licky the Robot Dog was born.

Licky has his own toys and bowl, along with a “doggie bed” in my son’s room. He’s quickly become a favorite of Austin’s, because it’s his own invention come to life.

For me and Dan, the look of pride on his face made it all worth it. We could have easily brushed it aside, but instead, we encouraged his idea. And now, the next time a light bulb goes off, Austin will be more likely to try it out.

If only the world always worked this way. Unfortunately, many of us have had quite the opposite reaction after proposing a new idea. I know I’ve had several dreams squashed — granted, sometimes it’s because they were flawed. Sometimes, however, they were ideas that had great potential, but were shot down for myriad reasons.

Here are some of the doozies I’ve heard:

These were responses to pitches for interviews or articles, mind you — not complex government mandates. Each time, I became a little more deflated, and a little less likely to speak up the next time. And as any good leader knows, that is the quickest way to kill innovation.

Imagine if Amazon CEO Jeff Bezos had issued one of those replies when a software engineer named Charlie Wood suggested a membership program offering free shipping. Instead, he green-lighted what would eventually become known as Prime. In fact, Bezos loved the idea so much that he called a small team of employees to his home on a Saturday and instructed them to roll it out immediately, because he believed this “big idea” could help the company “further capture the devotion of its best customers.”

It did that, and more.

Analysts believe there are between 50 and 60 million Prime members (Amazon hasn’t released the actual figure), and that these consumers spend nearly twice as much on a yearly basis than non-members. It even has its own day in July, which has been hugely successful. In 2015, Prime Day accounted for 74 percent of online purchases in the US, according to Wired.

Hearing stories like this gives me hope. Just as it does when I speak with CIOs like Mark Farrow of Hamilton Health Sciences, who are constantly looking for ways to foster innovation, whether it’s by conducting daily huddles or partnering with IBM on an innovation center.

“There were these little gems out there, but nobody knew what to do with them, so they’d just die on the vine,” he said in a recent interview.

In this ultra-competitive environment, smart leaders know they can’t afford to let that happen. They can’t let the next great idea walk out the door.