“Uh oh. What did she do now?” Dan didn’t have to ask who. He knew I was talking about Scarlett, our precocious, headstrong, whip-smart daughter.

“She won’t eat her dinner. I made her pasta — the Anna and Elsa kind (referring to the characters from Frozen, Scarlett’s favorite movie) — but she’s demanding shells (her boxed pasta of choice).”

“Don’t cave. She gets what you made her, or nothing.”

And so I went against my instincts and held my ground. Of course I tried once more to get her to eat the Anna and Elsa pasta. But when she threw the spoon on the floor in protest, I knew I had made the right call. There would be no shells.

Now, I realize this approach to handling a picky eater — “eat what’s in front of you or don’t eat” — is nothing new to most parents, but to me it was uncharted territory. If Scarlett wouldn’t try what I had made, there was always a backup option, and she knew it. For a while, I attributed this weakness on my part to the fact that she was a preemie (born at 4 lbs, 10 oz), meaning that for the first few months of her life, it was my sole mission to get nourishment into her little belly. There was even a period of two weeks when we had to take her to the pediatrician every few days to make sure she was gaining weight. And so to me, letting her go to bed hungry never seemed right — until the other night. 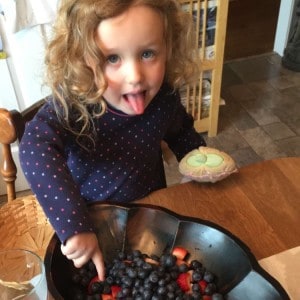 How could this girl make trouble?!

Because what I realized was that this was no longer a tiny, vulnerable baby that needed food every few hours. This was a toddler who was playing me. I also realized something else. When I had given in to her macaroni demands in the past, I wasn’t worried about malnutrition — I was worried about having a cranky kid on my hands who wouldn’t sleep well on an empty stomach.

And that’s exactly what happened the other night after pasta-gate. She was indeed cranky, and it took a while to get her to sleep. But she survived, and so did I.

And just like that, a new approach was born.

It’s funny, we get so caught up in this notion that we must always be consistent, otherwise we risk compromising our authority, when in fact, the truth is any parent — any leader — has to be willing to change.

It reminded me of a discussion I heard on the radio a few months ago when the New York Giants parted ways with longtime head coach Tom Coughlin. All types of people were calling in to share their thoughts on the man whose face had become synonymous with the Giants. But the topic that kept coming up wasn’t his two improbable Super Bowl victories — it was the fact that when Coughlin needed to change his ways, he did. When the rules that were so important to him (the most famous of which was, “show up early for meetings or not at all”) threatened to drive away key players, the stubborn, set-in-his-ways coach responded by bending, just enough. The result was a healthier environment that enabled both he and his players to focus 100 percent on football.

“People want to tell me that I’ve changed; I’m still not very comfortable with that notion,” Coughlin told NY Post reporter Mike Vaccaro. “I do think I’ve adjusted. And don’t we always say that’s what a coach has to do, make adjustments? At halftime. At practice. In a two-minute drill. Really, that’s all this is. Adjustment.”

And here’s the thing — the fact that he chose to listen and loosen the reigns made his players respect him more. If you don’t believe me, listen to Michael Strahan, who said in a recent piece that he is “thankful to Tom for more things than you could possibly imagine.”

Hearing that gives me hope. Because if someone who has accomplished as much as Tom Coughlin can change his tactics, so can I. And you can bet that with a stubborn daughter like Scarlett, I will — again and again.