“Have you heard anything yet?” my (then) coworker Christina asked me.

“No,” I said, checking my email for the 11th time in five minutes.

It was the day before Thanksgiving, many years ago, and we were waiting to hear whether the office was closing early. I wasn’t overly concerned; to me it just meant getting ahead of traffic and maybe being able to stop at the grocery store. But to Christina, an early dismissal meant she’d be able to attend the feast at her daughter’s daycare.

“I should’ve called in sick,” she said. Sadly, this was her only option after having burned through her 10 vacation days (at least half of which were spent on sick days for her toddler).

“What happens if you ask Dee?”

“Well, about a month ago I asked her I could leave at 3 o’clock to pick up my daughter, and she said I needed to take a half-day, because if ‘an exception is made’ for me, it’s not fair to everyone else.”

I was floored. I knew that her boss had a reputation of doing things very much by the book, but this was ridiculous. Did Dee really believe her staff was so immature that they’d resent her for showing empathy to a staff member? Or was she just so set in her ways that she refused to see that sometimes a leader can — and should — make an exception?

Either way, she failed.

As it turned out, we were dismissed two hours early that day, which enabled Christina to catch the tail-end of the feast. But it was too little, too late. Two weeks later, she gave notice after landing a part-time job that afforded her some flexibility. After two months with the company (which was a competing publisher), she earned a full-time position that allowed her to work from home three days a week. She’s still there, having risen quickly to a management role. And the only one surprised by her success was Dee, who had a tough time replacing such a solid team member.

Unfortunately, it’s a story most of us have heard before, in one form or another. And for me, it seems to be a recurring theme. In the past few months, two friends of mine who are moms left coveted positions for jobs that offered more flexibility, and I understood completely. As working parents, we constantly have to make compromises and say no to events that we’d love to attend, but simply can’t. To us, the opportunity to be able to say ‘yes’ is priceless.

It’s an absolute game-changer — I know it was for me. 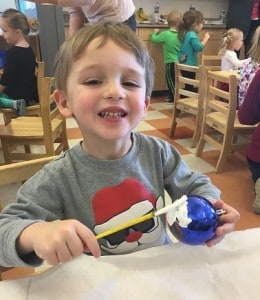 And so when I recently saw that the holiday craft party at my children’s day care facility was being held on a Wednesday — the day I usually meet with Anthony — I knew I’d just have to ask, and he’d probably be fine with it. He was. And I have to say, seeing the words ‘no worries’ in his reply made me feel incredibly grateful. Because the reality is that for every mother who is fortunate enough to be able to attend a craft party, there are many more who run into resistance at every turn, and constantly have to turn down invitations to concerts, feasts, and holiday celebrations.

And that’s the biggest fear among working moms: missing out. It’s the reason that many talented women choose to lean out, cut back on hours, or avoid the fast track. As a result, companies are missing out on talented, driven, smart people. On the other hand, leaders to create a culture of flexibility and encourage people to put family first get workers who are appreciative and determined to give their best effort.

As a parent, I know that there will be times when I miss a Halloween parade (as was the case last year when my flight from CHIME was delayed for 3 hours) or arrive late for daycare pickup (as Sue Schade can attest). But there are also times like yesterday, when I can be there for my kids — and then return to work with hands covered in glitter, ready to conquer the day.