I knew right away it was going to be one of those mornings. Scarlett had woken up on the wrong side of the toddler bed, and we were all going to pay dearly.

First, I had the nerve to put her waffle in the toaster myself, failing to realize that today, she wanted to do the honors.

Then I presented her with a sweater and pants set, not sensing that she wanted to wear a sundress on the first cool day of fall.

I was batting 1.000. Even a quick Mickey Mouse Clubhouse fix couldn’t save me.

So when it was time to leave for daycare, I wasn’t exactly brimming with confidence, but I had no idea of the meltdown that awaited me. You see, my daughter, like many 3-year-olds, can be absolutely as sweet as pie. But in the blink of an eye, she can go from adorable toddler to Miranda Priestly (from the book and movie, The Devil Wears Prada). 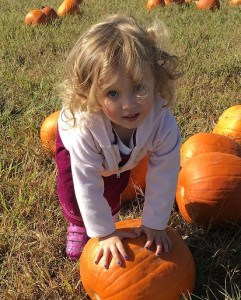 On this day, I was dealing with Miranda, who refused to be put in her car seat, even after I offered to let her open the door. And so after a standoff that lasted about two minutes but seemed like 20, I picked her up and buckled her into the seat, kicking and screaming (a phrase that is prone to hyperbole, but in this case was quite literal).

As all of this unfolded, I noticed that my neighbor was approaching us on her morning walk. She’s an older woman whose grandchildren have outgrown the toddler phase, so I wasn’t sure what she would say. All I could think was, “Please, please, don’t let this be one of those ‘cherish these times, dear’ speeches that people love to give me (usually when one of my kids is in mid-tantrum).” Or worse, please don’t let her comment on my child’s behavior, because I don’t think I can deal with any more dissent right now.

She did neither. Instead, she said, “Ooh, she’s a tough one,” suggesting that she had been in my shoes more than once. Then she patted me on the arm and said, “You’re doing great,” and went on with her walk.

I was stunned. It was the nicest thing she could have said. I was so moved I almost cried (Scarlett’s tantrum + no breakfast = emotional mom). But instead of crying, I took a deep breath and conquered the morning drop-off with renewed confidence, all because of three little words. Hearing that encouragement from someone who had been in the trenches and recognized how mightily I was struggling was so powerful that it actually shifted my mood. In the blink of an eye, my outlook had gone from “I have no idea what I’m doing” to “I got this.”

It’s funny, we all feel inclined to compliment people when they’re doing well, when in reality, the ones most in need of positive reinforcement are those who are otherwise capable, but are struggling at the moment. They’re the ones who need to know that people believe in them.

In a blog posted earlier this week, John T. Mason, CIO of Hill Country Memorial Hospital, talked about how important a leader’s reaction is when he is let down by a team member. Mason related a story from his time in the Army when he was late during a critical exercise — and on a day when a Two-Star General was observing. But instead of reaming him out, the General explained to him the impact of being late and told him not to let it happen again.

It’s a lesson Mason carries with him to this day. “It’s inevitable you are going to be let down by a team member, or even an entire team,” he wrote. “However, your reaction to this let down will set the tone going forward, and will either alienate you, or make them wildly loyal.”

In other words, if you react with anger, you create a culture of fear where your staff will either hide their mistakes or play it overly safe, which, in my book, is the biggest enemy of creativity. But if you react with understanding, you create an environment of trust and help build confidence rather than break it down.

Because, as I’m learning, a few little words can have an enormous impact.