“She’s testing you,” my Mom said, as I filled her in on my daughter’s latest trick. Scarlett has taken to throwing food off of her tray — but that’s just part of it. As she is doing it, she looks me right in the eye, as if to say, “You see this, right? I’m tossing the turkey meatballs you so lovingly made right onto the floor!”

She does it, as my mom pointed out, to get a reaction, and sadly, most of the time it works. I end up getting frustrated and asking her (in an annoyed tone) why she insists on decorating the floor. Shockingly, I don’t get much of an answer from my precocious 16-month-old.

Determined to find a solution, I turned to my usual source for advice and knowledge — other parents. And although there were some suggestions I knew wouldn’t work (“Make it into a game” — really?), one fellow mom gave me a great little nugget: “Pretend you have company. And not your Mom or best friend, but someone you don’t know as well. Try to act the same way you would if there was a guest sitting there, watching how you handle the situation.”

It was so simple, yet brilliant. 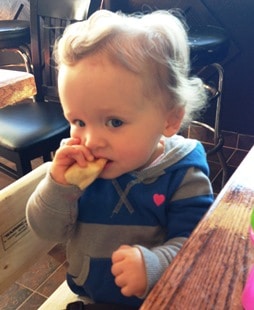 Because the truth is, with someone else watching (and why they’d want to sit in on the debacle that is dinner hour in my house is beyond me), I’d probably react differently. And sure enough, the next time she picked up a piece of banana, ready to launch it, I held her gaze. I didn’t immediately pick up the fruit that had been used as a pawn in this game; instead, I told her in a calm voice that I don’t like it when she does that, and I turned my attention elsewhere. She picked up another piece and did it again, but this time I didn’t look. Eventually, the game lost its allure.

Of course she still tests me with other fun games like standing up on the couch or putting toys in her mouth — all while locking eyes with me — but for the most part, I don’t take the bait.

Like many parenting tactics (or survival skills, as the case may be), this is one that can be applied to other aspects of life, particularly career management and networking. I thought about this last week during the CHIME Fall Forum, when I was speaking with a CIO friend who recently started a new role. Although I knew he didn’t leave his last organization on great terms, he was very careful not to allude to any of the ugliness during our brief chat. I thought he showed a lot of class in the way he handled the situation.

And even though sometimes I falter, I try to do the same, and I often rely on the same “invisible person in the room” strategy I apply with my little girl. Only in this case, the person is Bonnie Siegel, my career guru. I often ask myself, “How would Bonnie react to this question?”

In a recent blog, she addressed the issue of how to respond when you’re asked why you left a previous job. One piece of advice was: “Do not say anything negative about your current [or past] employer and employees. This is a small, close industry — what you do or say travels through many channels quickly.”

I couldn’t agree more. Even though the conversation I had with the aforementioned CIO took place in a casual setting, he still chose his words carefully. In the age of social media and instant communication, anything that even hints at controversy will travel at the speed of light, and so by censoring yourself — or at least putting a nice, political spin on it — you’re protecting not just your own reputation, but those of your colleagues.

It can be tempting to take the bait and fire a few shots at a previous employer — or at least tell your side of the story, but doing this can and will come back to haunt you. The best thing to do is deflect the questions and move on.

Eventually, the game will lose its allure.