“Any reason why the boys rooms r pitch black?!?!?! They r going to freak if they wake up” my wife texted me from upstairs.

“I’m working in garage. Don’t worry,” I feebly replied, returning to my task, lamenting that the lights inside and outside the garage were on the same breaker as my son’s bedrooms.

And what a job it had become, an all-encompassing, obsessive pursuit — my white whale. I was going to get these two gadgets working if it was the last thing I did.

Now, to be fair, the two simple switches that were controlling the lights had been working just fine, but once I sauntered down the electrical aisle at Home Depot to discover motion sensors and timers, they would no longer do. Let the project begin!

First, I did the motion sensor, and with little trouble. But when it came time to install the timer next to it, things got sticky. You see, the two switches were side by side but in different boxes, and I needed to have some wires connect across the boxes. The plot thickened. Also, the box into which I was trying to install the timer was so shallow there was no way I’d fit the device and wires into it, so I really needed to remove both single boxes and replace them with a double gang (the newer ones are much deeper).

The small box on the left came out easily; in fact, it was attached to nothing at all, but when I tried to pry the box on the right out, it wouldn’t budge. Upon further review, I could see metal “wings” coming off the right side of the box, running up and down at least two inches beyond the actual box top and bottom. If the connections to the stud were through these wings, I didn’t see how I could get the box out without hacking up the wall.

When running this problem past a hardware store clerk, he sagaciously replied, “Dunno. Google it.”

Which I promptly did. After about 30 minutes on all kinds of sites and message boards, I found an exact description of my problem and a suggested solution: cut the wings with a reciprocating saw.

“You’re going to knock the house down,” my wife said.

“Perhaps,” I replied nonchalantly, detailing the challenge with a bit too much enthusiasm.

“You know,” she said, “this is like me telling you about how I chose a color at the nail salon.”

“That bad?” I asked. (At this point, I must apologize to all our female readers who agree with her.)

So, I took my new reciprocating saw to the wings and slashed them like a light sabre through Storm Trooper #54. Nice! The box came out easily. Though I thought I was in good shape and had the wiring all figured out, when I combined the four sets of wires (each having a black and white) with the two switches (one of which had three wires and the other two), things weren’t working. I realized that I was flying blind, not sure what was going where. So I started over, straightened all the wires, turned on the power (don’t try this at home), and took a methodical approach. First, I needed to figure out which wire carried the incoming power, which I did by holding a non-contact voltage detector to each one. Luckily, only one made the device light up. Great, that makes sense. I marked the wire with red tape and wrote down what that signified. Then, it was time to figure out where each of the other three sets was going. I carefully held the power wire to each one in turn, noting which light turned on, then affixing a different color tape to each one and writing down the color code. 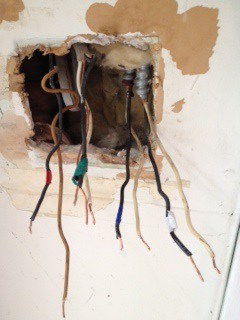 I turned off the breaker. Now, I knew what I was doing. I was thrilled, full of excitement, I’d won. 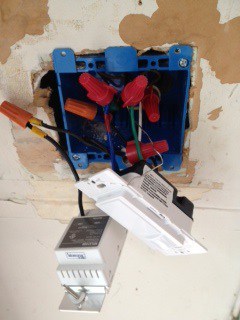 I turned on the breaker praying it would work. It had to work! It should work! (For those bored to tears, skip down to “Victory!”)

The timer worked perfectly, controlling both exterior lights. Something was wrong, however, with the sensor. While the lights that were to be controlled by it were on, I could not shut them off using the manual switch on the device. Something was wrong. I was so frustrated!

Despite my wife’s aversion to hearing about the subject, I ran it past her. After a few minutes googling around, she said, “it’s a problem with the ground on the sensor.”

“The ground? I have the ground connected,” I said in frustration.

The next day, I took the issue to Google myself, and after much searching, found someone who suggested connecting the green ground wire on the sensor into the other white wires in the box. I then did some checking on connecting ground to neutral wires and determined this was not a good idea.

After looking at the sensor device instructions for the millionth time, I noticed a technical support number. I called. Immediately upon hearing my problem, the tech said, “It doesn’t like the ground. Connect the green wire, not the bare wire (the device has both), into the white wires in the box.”

I couldn’t wait to get home. After taking off the faceplate and unscrewing the switches, I dug in, undoing the ground connection and twisting the green sensor wire in with the gaggle of white wires. The moment had come, the great reveal — please, please, please, please. I turned the breaker back on. 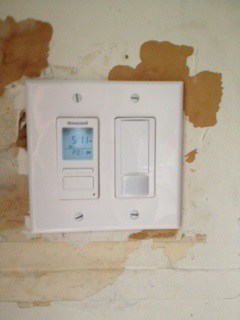 Silly, you say? Nonsense, you say? Foolish, you say? Not the feeling I had and still have from this little conquest. And it wasn’t just in the slaying of Moby Dick that I found pleasure, but the pursuit. For more days than I care to admit, I fixated on this, thought about it constantly, pondered wire configurations and electrical current flows. I bought a book on wiring and spent hours surfing the net for clues. Was I obsessed? Yes, but in a very healthy way, I think, because, for me (and I suspect for many others) to be content, my energies need to be deeply engaged in solving some puzzle I find interesting, some pursuit whose engagement or goal (hopefully both) give me a sense of satisfaction. To folks like us, it is not “work” that is the enemy, but idleness, for idleness is the surest generator of anxiety that I know. Free time is only that if your mind is engaged in a captivating pursuit, otherwise it is a prison.

Of course, we must have different channels for our energies, put in this direction for a few hours, then into another. Each has different benefits and rewards, each different pressures and stresses, but each is vital. To relax, Winston Churchill built out much of his estate, Chartwell, with his own hands. He relaxed through a different kind of work, not its absence.

And so, to my wife’s charge, I must plead guilty — I was obsessed … happily, blissfully, distractedly obsessed in the pursuit of besting a challenge I enjoyed conquering. The whale has been slain, but as I’ve indicated, in doing so I’ve lost as much as I’ve gained, and so on to find the next beast, the next white whale. Of course, when your home was built in the sixties, that’s never a problem.