In light of concerns regarding the lack of ICD-10-readiness, healthcare organizations are turning to third-party consulting firms to help overcome challenges with the technology and provide training, according to new data from KLAS. In the report — ICD-10 Perception 2012: Can Technology Relieve Readiness Issues — the majority of providers said they have tapped consultants for ICD-10 roadmap/gap analysis.

Education was also a key driver in seeking outside help, with providers citing clinician training (52 percent) and coder/staff training (40 percent) as the biggest hurdles in achieving ICD-10 readiness.

“Clinician readiness is providers’ top concern, specifically relating to documentation,” wrote report author Lois Krotz. “Training of physicians and coders was another major concern, along with retention of coders.”

According to KLAS, Cerner, Epic, and Siemens were ranked highest in terms of ICD-10 preparation, while Allscripts and Meditech rated lowest. Computer-assisted coding is one of the top technologies being utilized for the ICD-10 transition, with 3M garnering the majority of the market share.

The study is the second in a two-part series, with the first segment looking at how providers expect to use consulting firms in their preparation and ICD-10 transition plans. According to the initial report — ICD-10 Consulting: Roadmap to a Successful Transition, the vast majority (84 percent) of providers had engaged a consulting firm for ICD-10 roadmap/gap analysis. The Advisory Board ranked first in this category, earning high praise for quality roadmaps and best-practice sharing. However, findings also showed that Deloitte has the largest and most complex engagements of any firm.

As with the second report, training was the second most frequent type of engagement with consultants, with the Precyse University offering standing out. 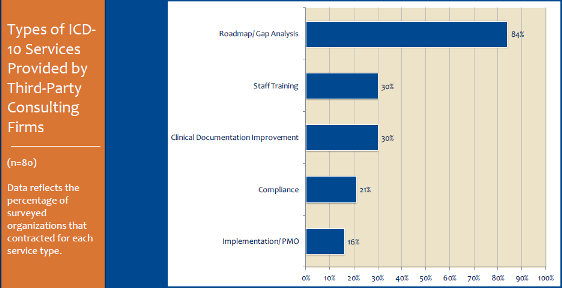