“What are the totals?”

Every night after we’ve put our 6-month-old twins to bed, Dan and I get to work. While one of us (usually me) washes the bottles, the other (usually Dan, the numbers expert) adds up the total ounces of formula each baby has consumed during the day. We’ll then compare those to the totals of the past few days to make sure they’re eating enough.

Everything gets written down — who ate what, how much, and when. Wherever we go, it comes with us. And if we forget it, one of us texts the information to the other so everything gets recorded in the book. One of our friends jokingly referred to it as “the captain’s log.” 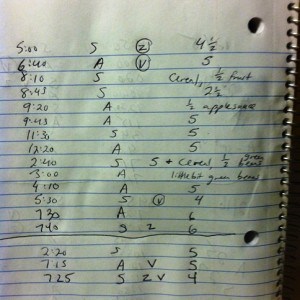 It probably sounds like typical neurotic first-time parent behavior, but in our case, I believe it’s warranted. Not only do we have twins, but Scarlett and Austin were born seven weeks early, and as a result, were quite small when we brought them home from the hospital (after they spent three weeks in the NICU at CentraState Medical Center).

So from day one, it was drilled into our heads that we needed to do whatever it takes to get ounces in their little bellies. And that’s what we did. No matter how frustrating it was or how long it took (particularly at 3 a.m. when everyone’s exhausted), we made sure that most of the time, they finished their bottles.

At their six-month checkup, we were thrilled to see that Scarlett had tripled her birth weight, and Austin had almost quadrupled his. It was a huge accomplishment; I wanted to throw a parade. But no sooner did we learn their weights that our physician pulled out the growth chart and did the necessary comparisons. And although I’m proud to say that my babies finally register on the general growth chart (instead of just the gestational age-adjusted chart), it’s clear that we still have a lot of catching up to do.

And I get that. But sometimes, I just don’t want to hear it.

I know that Austin and Scarlett are smaller than other babies their age. But I also know that they’ve already faced a number of obstacles and overcame them. The tiny, fragile infants we took home from the hospital have grown by leaps and bounds.

Sometimes, that is what I need to hear.

But it’s not how things go. Most of us are wired to focus not on what we’ve accomplished, but what still needs to be done. It’s human nature. And I don’t fault our doctor for pulling out the growth chart, but just once, instead of pointing out what percentile my babies fall into, I’d love it if she would hold up the preemie-sized diapers that were too big for them when they were a month old, and compare it to the diapers they now wear. It would show how far they’ve come, and it would validate all the work we’ve done to get to this point.

But then I think, why does that validation need to come from a physician? Maybe we should be the ones patting ourselves on the back. As much as it might go against our nature — especially those of us who are competitive — sometimes you need to step back and look at everything you’ve accomplished, and allow yourself to feel satisfied and even proud.

There is always going to be more work to do. There are always going to be more milestones to reach. And I definitely believe that the most successful individuals are those who always reaching higher, and will never accept a participation trophy. But I also believe that in these times, when we all have so much on our plates, it’s more important than ever to acknowledge everything we’ve accomplished.

So as we get to the end of the year, take a minute to congratulate your staff on a job well done, and give yourself a little credit.