The Bumpy Road Ahead For Small Hospital EMRs

If 2011 is an indication of things to come, the road ahead could be a bumpy one for the community hospital EMR market. According to a new KLAS Brief — Community Hospital Market Share 2012: Small Hospitals, Big Changes — the market experienced a great deal of upheaval last year, with more than 200 hospitals under 200 beds changing or replacing their hospital HIS.

The report found that economic pressures continue to push smaller hospitals into IDN relationships in order to survive, resulting in greater displacement of smaller-hospital CIS solutions with larger hospitals’ systems such as Epic and Cerner.

In addition, EMR dissatisfaction looms large in the market. “One in three community providers who have gone live with their EMR in the past 12 months feels they made the wrong decision,” said Paul Pitcher, research director. “With many more-established vendors struggling to consistently deliver well for these hospitals, the door has been opened for lesser-known entrants — such as NextGen, Prognosis, QuadraMed, and RazorInsights — to gain market traction.”

According to KLAS, Epic secured the most overall community CIS wins for 2011 followed by Healthland, Cerner, and CPSI. The research also uncovered significant differences in vendor performance and provider satisfaction, especially when broken out by various bed sizes within the community hospital EMR space. 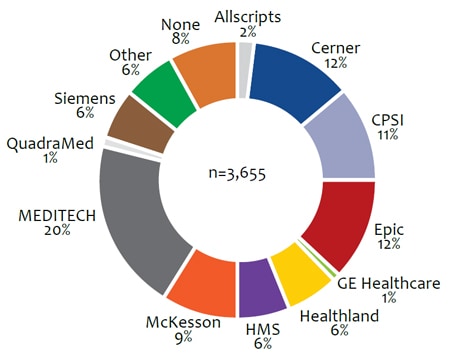