Although the cardiology IT market is improving, providers still can’t identify one vendor that successfully offers integration, functionality, and comprehensive modules, according to a new report from KLAS — Cardiology IT 2012: Fitting the Pieces Together.

In the study, McKesson, Merge, Philips, and Siemens were named top-tier vendors in terms of the combination of adoption and performance. However, a gap remains between what providers need and what is currently being offered.

“Though no vendor handles every provider desire with ease, some are closer to meeting those needs than others,” said Monique Rasband, cardiology research director and author of the report. “Most providers are anxious to be able to work with one vendor who has the needed modules and functional strength to make their physicians, clinical users, and integration successful. Providers who wish to cover several modalities while going to a single vendor are left wanting more. However, those going with McKesson, Merge, Philips, or Siemens seem to feel they are getting closer to their target.”

In the report, McKesson, Merge, Philips and Siemens all scored high marks for performance and adoption. The second tier of vendors — which included Digisonics, LUMEDX, and ScImage — had high performance ratings but lower levels of adoption, while the third group — Agfa, Fugi, and GE — garnered low marks in both categories. The major modules included reporting and CPACS for echo, cath, vascular/ peripheral vascular, pediatric echo and cath, nuclear cardiology, and electrophysiology.

In addition to using more modules, customers for McKesson, Merge, Philips, and Siemens were also relatively pleased with other aspects of their vendor’s service and system. McKesson’s overall performance score improved nearly three points since last year, partly due to providers who upgraded to v.12. Cath reporting, however, continues to be a pain point for some clients.

Merge customers were generally optimistic about future development and indicated satisfaction with functionality in CPACS and reporting. However, although remote-access functionality has improved, users noted that the echo measurements have additional room for improvement in the remote version.

Philips customers gave high marks to vascular PACS and reporting as well as adult echo PACS and reporting. And while integration is a missing element, Philips has many pieces necessary for a complete CVIS, the report found. Siemens has made great strides, upping its KLAS performance score by 10 points by offering enhanced communication and service. Providers expressed confidence that Siemens will continue to improve even though many are still awaiting some functionality improvements. 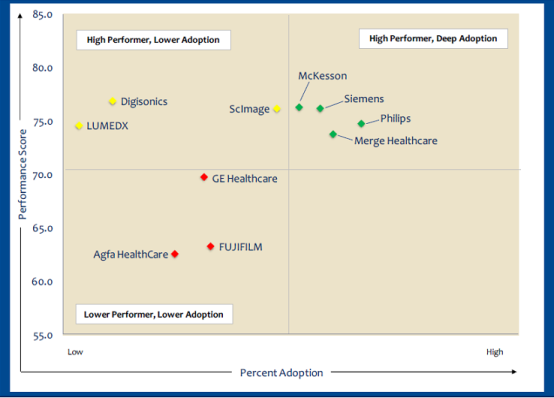 Click on the image to see a full-size version

Agfa, Fuji, and GE scored low both in terms of performance and adoption. For Agfa, vascular reporting was particularly noted as a pain point. Although Fuji has high adoption of echo functionality, it lacks cath and vascular functionality. GE has strong adoption of cath PACS but is weaker in all reporting areas. All three vendors have promised functionality they have yet to deliver to their customers, which has resulted in lower scores, according to KLAS.