With its strong digital mammography product, which features the groundbreaking tomosynthesis imaging technique, Hologic has solidified its spot as top vendor in the space, according to a new KLAS study — Women’s Imaging 2012:Tomosynthesis Makes a Splash.

The report found that tomosynthesis lives up to the hype in terms of its ability to detect lesions that otherwise might go unnoticed. However, it does come with its share of challenges, including a high price tag, and lack of integration with PACS, which can cause workflow problems.

“Some customers reported that their PACS system would not accept tomosynthesis studies. It has created a workflow concern for radiologists who have to leave their office or reading room and come out to the tomosynthesis workstation to read the study,” said report author Monique Rasband. “Despite these challenges, many are saying it is worth the effort because they are able to so clearly identify lesions they may not have been able to see before.”

GE leads the second tier of digital mammography vendors that also includes Fuji and Siemens; all three perform above the medical equipment average, but lag behind Hologic. According to KLAS, a wide range of imaging products and long-established relationships has helped GE secure a number of new digital mammography deals. However, sub-par implementations and slow development of tomosynthesis keep GE second to Hologic.

Siemens has demonstrated improvement and is fighting for market share with its second run at digital mammography — this time using its own detectors. The vendor has made some headway tackling reliability issues, but more work is needed, according to the study, which found that Siemens customers reported the most downtime of all vendors. Fuji’s products, which are mainly used in smaller hospitals and outpatient centers, were shown to be cost-effective; however, its CR unit is considered to be old technology. Adoption of the new digital mammography unit, which recently earned FDA approval, has been slow among Fuji’s current customers.

The study also featured a number of niche vendors — including Aurora, Dilon, SonoCiné, and U-Systems—which are plagued by reimbursement issues. Although many providers liked the functionality of SonoCiné and U-Systems, they said they would not use it in many cases because reimbursement codes did not exist and patients weren’t willing to pay out of pocket. 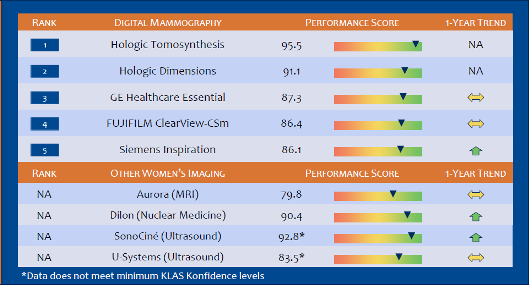 Click on the chart above to see full-sized image