With Meaningful Use requirements in mind, hospitals with fewer than 150 beds are focusing less on traditional community CIS vendors and more on large hospital CIS vendors, according to a new KLAS report.

“I think it really comes down to who can get me to deep clinicals; who are the vendors that can scale down (to between 100 and 150 beds) and who’s integrated,” said KLAS General Manager of Clinical Research Jason Hess, noting that only Epic and Cerner have a fully integrated suite of inpatient and outpatient EMR software.

Despite that, Meditech remains the most-considered vendor in community hospitals, many of which primarily focus inside their four walls. But even considering that, extensive wait times for software — reportedly up to 18 months — could be causing some to pass on the Massachusetts-based vendor.

“There’s the challenge of how can they possibly scale and get that many customers live to 6.0 (the latest Meditech software). Magic (an earlier version) historically has not been reported as a real physician friendly application or product suite. So if your physicians need to be engaged for Meaningful Use, do you feel like you can get there with Magic?”

Specifically, Meditech is considered most often in small hospitals (1-150 beds), with Cerner getting the nod in mid-sized hospitals (151-300 beds). One feature many of those facilities like about Cerner is a remote-hosting option. 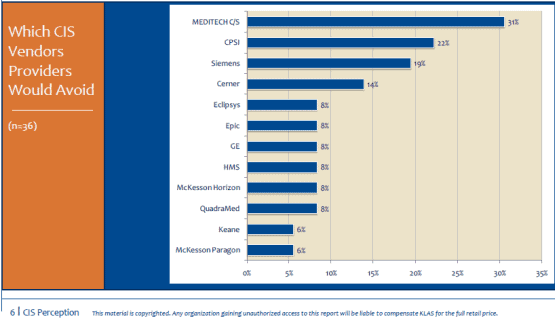 Click on the chart above for a full-size image

When it comes to McKesson, KLAS found its Paragon software is steadily gathering provider interest, while Horizon is approaching an important moment. To date, a few customers have gone live on Horizon 10.3 software, a version meant to sooth some integration issues providers had been grappling with.

“I don’t know that (10.3) is the end all, but certainly there’s a big chunk of functionality and promises that will be, hopefully, kept in that version. The big question there is can they get their customers to CPOE on a certified version?”asks Hess. “It needs to work, and they need to bring a lot of their folks up to that version pretty quickly.”

To a lesser extent, Epic’s mindshare is also growing in the community market. But getting Epic for a small hospital isn’t as easy as placing a one-click online order. In fact, it seems those facilities must partner with larger organizations who are already Epic clients. The larger facilities will then extend the software out, or partner with the smaller organization, and support their Epic rollout. The program, while in progress at some facilities like Fletcher Allen in Vermont, doesn’t seem to be formalized.

“As far as I know, it’s not (formalized). There are some that will try and piggy back on with a larger Epic hospital to get access to it,” explains Hess.

With KLAS finding that 50 percent of the large hospital market (over 300 beds) considers Epic to be their likely software provider of choice, the questions is can Epic handle what looks to be an oncoming tsunami of business?

When it comes to the new Allscripts, Hess said while its ambulatory solution is well thought of, there has been some slowdown on the Eclipsys side. Additionally, many responding to the survey thought integration of the two companies would take some time.

“How long in reality will it take to merge those two together and, I think, even with the best of intentions of two very talented companies, the perception from customers is that it’s going to take a while,” said Hess. “So given that the clock is ticking on Meaningful Use, and the criticality of having an integrated ambulatory offering — or highly interfaced — how long is that going to take? There is some skepticism about how fast they can go.”

A bright spot in the report — further examined in a separate KLAS study — was Siemens Soarian. “They are really starting to turn a corner, I think the challenge is it takes the industry some time to get that message and, in some cases, a year or two before the message is out that, ‘Hey this is a new service-oriented architecture, newer technology, some pretty cool stuff they are able to do with that product,’ but it takes the market some time.”

GE, Healthland, HMS and QuadraMed are also highlighted in the report.