Before the term HIE appeared in the pages of HITECH, many CIOs didn’t pay it much attention, preferring instead to focus on getting their houses in order. While that’s still a great strategy, healthcare informatics leaders now have no choice but to dip their toes into the murky waters of inter-organizational information exchange. While many exchanges are being supported with homegrown technologies, a number have gone the vendor route. In a recently released report, KLAS broke down the vendor landscape, finding a wide gulf between marketing and concrete results. Recently, healthsystemCIO.com editor Anthony Guerra spoke with the report’s author — KLAS Clinical Research GM Jason Hess — about trends in this rapidly evolving niche.

As soon as I send that data off, at what point am I not responsible for that information I’m sharing with the HIE, whether it’s behind my firewall or it’s at a central aggregation point …

… if you have to toggle out to a portal solution where that data may be available or after you may get some kind of flag that it’s available, are you really going to take the time to do that?

“ … we’d love to have this data pushed to our EMR, the problem is it’s expensive because these vendors are going to charge money to have the data ported to them.”

GUERRA: Your report mentioned that HITECH has at least temporarily frozen the HIE market, creating confusion where good progress was being made. Can you go into that a little bit?

HESS: Obviously, this has been a shot in the arm for EMRs, healthcare IT, the industry; certainly for HIEs it’s bolstered interest around it. The interesting thing, though, is that it has also slowed progress and created confusion.

I love this quote we heard from an HIE executive in live operation, not necessarily a state-sponsored HIE, but one that’s going to have to compete with whatever the state designates to be the state HIE: “I think the stimulus money is a really smart thing to do, but giving the states $4 million to $30 million to plan a state-based network is an absolute disaster. The people who the states are inviting to the table don’t have enough training to figure out what they should do. It’s like the owner of a car dealership trying to design tires.”

So here’s a guy saying, “Look, we’re doing this, it’s successful. Yes, we’ve had to get a lot of federal money to get it up and running and now the state is coming in and putting people in charge of deciding where the additional money goes, but they are talking to people who really don’t understand how to do this stuff.”

And this guy’s saying, “Look, take a look at what we’ve done, what we’ve established,” but when you come to us and say, “Now you have to prove that what you’re doing will be viable for the rest of the state,” that’s kind of frustrating.

Slowed progress, more hesitation, it’s as if the sales cycle has slowed because now people are saying, “Wow, we really have to figure out where this funding is going to come from … Oh, it’s coming from the states and they’re going to disseminate those dollars, wow … Well, maybe we better slow down a little bit and make sure that the people signing off on this are at the table.”

GUERRA: I’ve definitely heard about groups coming out of nowhere and staking a claim on government HIE money. There’s a lot of frustration around the politics of that.

HESS: It’s just silly, plus who are you bringing in to decide who this money goes to? And I think that’s this whole notion of a car dealership owner designing tires. It’s a little out of the scope, so why don’t you come to somebody who really knows how to do this? HITECH is making people say there’s money to be had if we do this stuff, but at the same time the way it’s being disseminated is creating some pause.

GUERRA: Talk about the data problem you mention in the report.

HESS: I don’t think technology is the issue. I mean I’ve heard it a dozen times, directors and participating CIOs in these things told me, “Look, technology is not the problem, it all has to do with governance, privacy.” Technology exists on how to port this stuff around, but it’s what’s in those data packets that’s of concern. As soon as I send that data off, at what point am I not responsible for that information I’m sharing with the HIE, whether it’s behind my firewall or it’s at a central aggregation point, whatever model I use. I think the issue is just figuring out how do you comply with HIPAA, with governance of who’s in charge of the data, who pays for it, maintaining the privacy of it once it’s ported around — those are the top concerns that came up again and again. 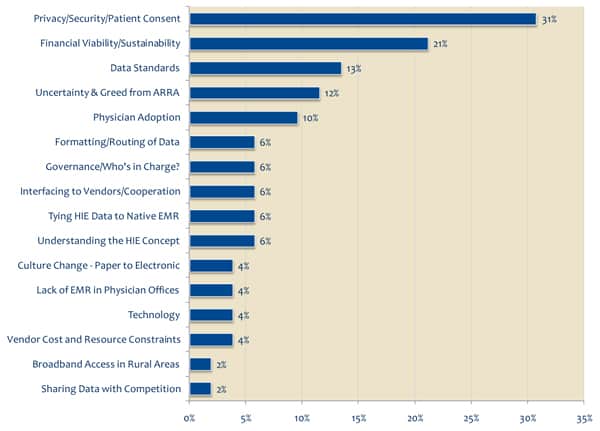 GUERRA: And there’s no guarantee that physicians will be comfortable taking action off clinical data shown in an HIE — they fear being held liable if that data is wrong.

HESS: Right. So that’s part of it, and what if you’re an ED doc who sees two to three patients an hour, they’re backing up in the waiting room and you get some notification that information on this patient is available, but it’s not in the native workflow. In other words, it’s not in the application that you use on a day-to-day basis for your documentation or orders. So if you have to toggle out to a portal solution where that data may be available or after you may get some kind of flag that it’s available, are you really going to take the time to do that?

Now, there are some of these folks who are just doing it in a portal manner. Seventy-one percent of these HIEs that we talked to are pushing data to a portal. (AvoCare, Carefx, Cerner, dbMotion, ICA, InterSystems, MedPlus and Microsoft)

Thirty-seven percent are doing EMR-only —you would think is a good thing because now it’s in the workflow, hopefully. (Epic, GE, HealthUnity, PatientKeeper)

And then you’ve got those embracing multiple methods — which covers the above two, and also handhelds and Lite EMR. (Axolotl, Medicity, Medseek, Orion, Telus)

So I think the idea is yes, if you could put it right in front of the clinician so they can see it and it’s actionable and it’s right there with the documentation order and all the other things they’re doing, they will be more likely use it. The challenge with that is getting the cooperation from those EMR vendors for interfaces. So there are many of these that said, “Look, we’d love to have this data pushed to our EMR, the problem is it’s expensive because these vendors are going to charge money to have the data ported to them. So for now, we’re just working with a portal.”

I asked, “What’s the utility of data in a portal?”

They said, “Look, it’s better than nothing, that’s where we’re starting, and we’ll move along that continuum over time.”